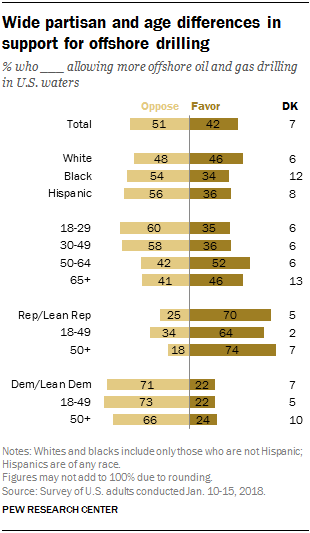 Attitudes about expanded offshore oil and gas drilling are divided by age and party, as well as by where people live. People who live within 25 miles of a coastline are less supportive of offshore drilling than are those who live farther from a coast.

Republicans and Republican-leaning independents are overwhelmingly in favor of expanding offshore drilling for oil and gas. Seven-in-ten say they favor allowing more drilling, and only a quarter say they oppose it, according to the survey of 1,503 adults conducted Jan. 10-15.

Democrats and Democratic leaners show the opposite pattern. Only 22% of Democrats favor allowing more offshore drilling and 71% oppose it. Among Democrats, whites are stronger in their opposition than blacks and Hispanics (77% of white Democrats oppose expanded drilling, compared with 57% of black Democrats and 65% of Hispanic Democrats).

Regardless of partisan affiliation, younger people are more opposed to offshore drilling than are older people. About six-in-ten (58%) of those ages 18 to 49 oppose allowing more drilling off the nation’s coasts – 16 percentage points more than those 50 or older (42%). 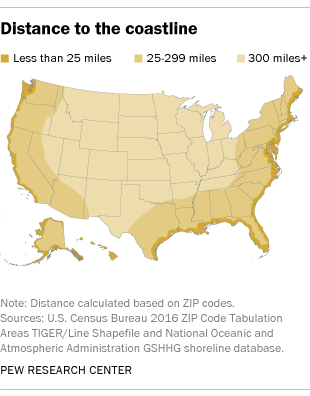 These attitudinal differences reflect differences in the partisan composition of those who live nearer and farther from a coast. Among those who live within 25 miles of a coastline, Democrats and Democratic leaners outnumber Republicans and Republican leaners by nearly two-t0-one (59% to 30%). Among Americans who live 300 or more miles from the coast, the partisan balance is about even (45% identify as Republicans or Republican leaners and 46% identify as Democrats or Democratic leaners).