While only 20% of Americans say they feel overloaded by the amount of information they encounter in modern life, many are open to getting some help in finding material that can help them make decisions.

A new analysis of a November 2016 Pew Research Center survey shows that 76% of U.S. adults say they would benefit “a lot” from having at least one of seven different kinds of help in accessing information that can help them make decisions. (See chart below for full list.) About four-in-ten (41%) say three or more of these possible forms of assistance would help them a lot. 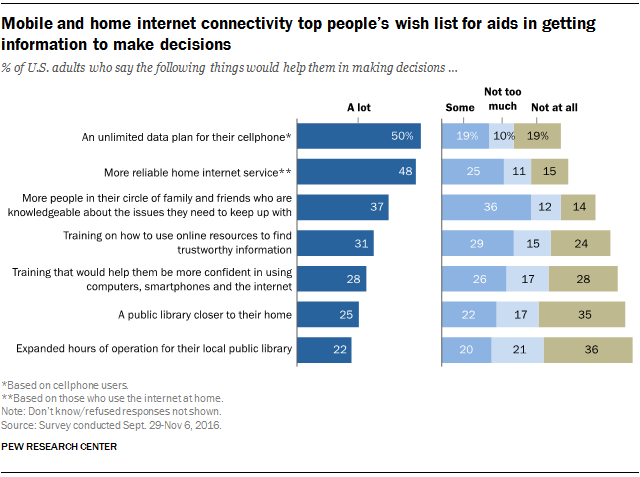 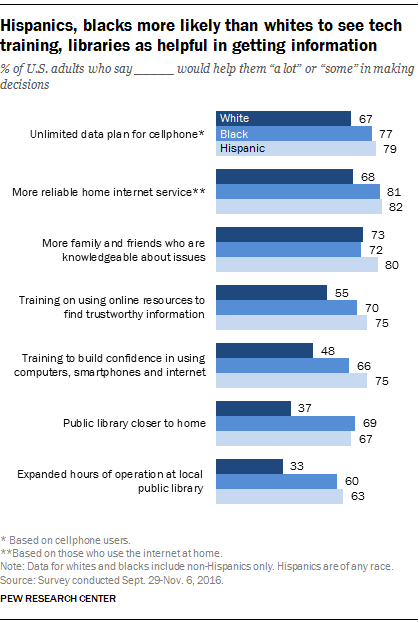 More than half of adults say that training in the digital realm would help them when it comes to accessing information that can aid in making decisions. Around six-in-ten (61%) say they would like training on how to use online resources to find trustworthy information, while 55% would like training that can build confidence in using computers, smartphones and the internet.

There are smaller, yet still significant, gaps when looking at education. Those with a high school diploma or less are more likely to want training in both areas than those who have graduated from college.

Americans are somewhat less likely to say they would benefit from turning to libraries when it comes to accessing information that can help them make decisions. Some 47% and 43%, respectively, say having a library nearby or one with longer hours would help in this regard.

However, there are large differences about the value of libraries by race and educational attainment. By nearly two-to-one, blacks and Hispanics are more likely than whites to see benefits in having a library nearby or having better library hours. Americans with a high school diploma or less are also more likely than those with a college degree or more to see these benefits.

How Americans see digital privacy issues amid the COVID-19 outbreak
The state of privacy in post-Snowden America
Most Americans – especially Millennials – say libraries can help them find reliable, trustworthy information
Key takeaways on Americans’ views about privacy, surveillance and data-sharing
Key findings about Americans’ confidence in science and their views on scientists’ role in society