As debates swirl around science-related issues ranging from climate change to the food we eat, an important question is where Americans go to stay informed about science topics, if anywhere. A Pew Research Center survey conducted in May and June finds that general news outlets – those that cover a variety of topics in a given day – play a large role in how Americans stay informed about science. 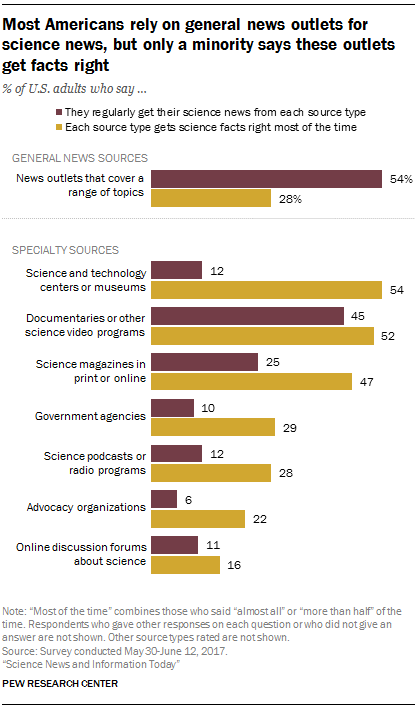 2On balance, most Americans (57%) say that the news media do a good job covering science, but people also see problems in coverage stemming from the news media, researchers and the public itself. For example, 43% of Americans say it is a big problem that the news media are too quick to report findings that may not hold up. A similar share also see problems stemming from researchers publishing so many studies that it is hard to tell high from low quality (40% say this is a big problem).

When pressed to choose which problem is greater, almost three-quarters of Americans (73%) say that the bigger problem lies with the way the news media cover scientific research, whereas just about a quarter (24%) say the bigger problem is the way researchers publish and share their findings. 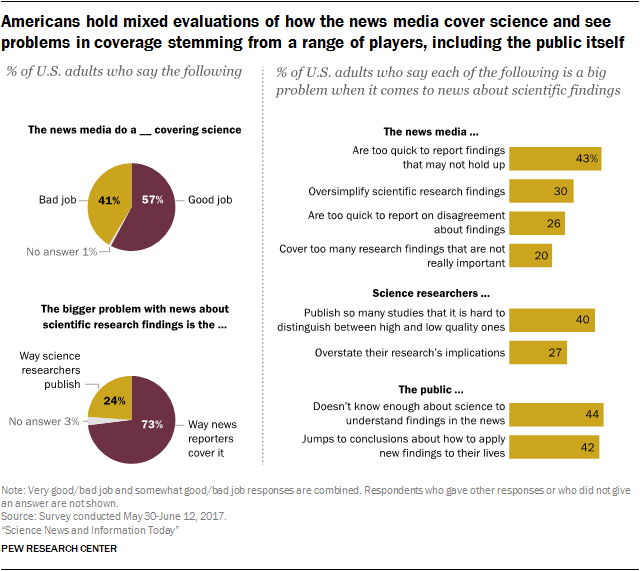 At the same time, roughly four-in-ten U.S. adults say the public not knowing enough about science (44%) and jumping to conclusions about how to apply research findings to their lives (42%) are big problems in coverage of research findings. 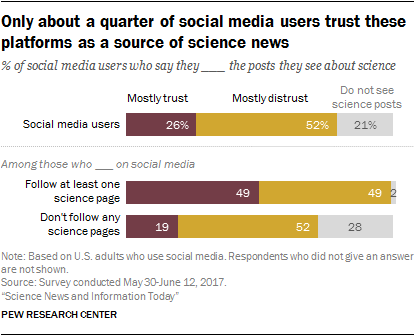 About a quarter of social media users – 26% – say they follow science pages or accounts. These users are more likely to consider social media an important source of their science news and are evenly divided over whether they mostly trust or distrust the science posts they see (49% to 49%). 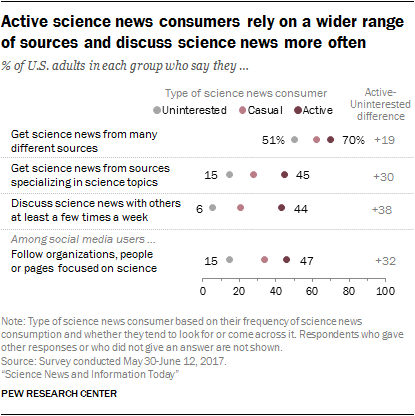 5Family and friends play a relatively modest role in how Americans get and share science news. A third of Americans (33%) say they regularly get their science news from family and friends, and just 17% have discussions with others about science news at least a few times a week – far lower than shares who talk about news in general or politics in particular. And when people think about the accuracy of information sources about science, fewer say their family and friends get the science facts right most of the time (16%) than say the same about either general news outlets (28%) or a range of specialty outlets such as science museums (54%), science documentaries (52%) or science magazines (47%).