About a million immigrants receive U.S. green cards each year, but fewer than half are new arrivals from other countries. The majority already live in the United States on temporary visas, according to recently released U.S. Department of Homeland Security data that show that the two groups have different profiles. 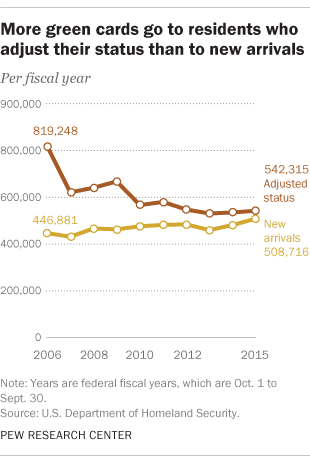 In every fiscal year since 2004, the U.S. has issued more green cards to immigrants living in the country on another visa who adjust their legal status than to new arrivals. (In fiscal 2015, the most recent full year available, there were 542,315 in the former category and 508,716 in the latter.) Since 2004, a total of 7.4 million people who adjusted their status and 5.5 million new arrivals have received lawful permanent residency in the form of a green card.

The size of the difference between the two groups has diminished, though, because the number of visas granted to immigrants already in the U.S. has declined in the past decade while the number granted to new arrivals have risen slightly. In the first two quarters of fiscal 2017, from Oct. 1 to March 30, new arrivals (289,603) slightly outnumbered those who adjusted their status (270,547). The Trump administration has announced immigration restrictions that could continue to reduce the number of people who receive green cards while they are in the U.S. on temporary visas.

The federal government grants green cards for lawful permanent residence based on a complex system of admission categories and numerical quotas. Most go to immigrants who are sponsored by family members, either as immediate relatives of U.S. citizens (44% of fiscal 2015 green cards) or other family members of citizens and lawful permanent residents (20%).

Employment-related categories (including workers’ family members) accounted for 14% of 2015 green cards. Refugees (11%) and people granted asylum (3%) together made up a similar share. There also is a “diversity” category for people from countries with historically low rates of U.S. immigration (5%). There are no green card quotas for immediate relatives, refugees and people granted asylum, but there is a limit on the number of family-sponsored and employment-based green cards that can be issued to immigrants from any country in a fiscal year (currently set at 7%).

The group of refugees and people granted asylum includes Cubans, who had been allowed to apply for permanent residency – rather than be sent back home – if they set foot on U.S. soil, until President Obama ended that policy in January. Refugees and people granted asylum could be the category most affected by the Trump administration’s plans to reduce and restrict refugee admissions.

President Donald Trump has ordered a lower ceiling on the number of refugees admitted to the U.S., though the order’s implementation is tied up in court. (The Supreme Court has agreed to hear the case, which also includes a temporary ban on travelers from Iran, Libya, Somalia, Sudan, Syria and Yemen.) Meanwhile, the number of refugees resettled in the U.S. each month has declined since October. Refugees are required by law to apply for lawful permanent residence status after one year of U.S. residence (people granted asylum are eligible to apply a year after being granted asylum), so any restrictions on refugees would have an impact on green card applications relatively soon.

Trump administration officials also have discussed restricting the number of temporary work visas – for example the H-1B visas for high-skilled workers, which is the main pathway for high-skilled workers to gain permanent residency. From fiscal 2010 to 2014, about 36% of employment-related green cards – more than 222,000 – were granted to H-1B visa holders, according to a report by the Bipartisan Policy Center that used Department of Homeland Security data obtained under a Freedom of Information Act request. According to its findings, a majority of people who receive employment-related green cards were in the U.S. on temporary worker visas.

New arrivals who receive green cards, on the other hand, are far more likely to be sponsored by family members – fully 85% are, compared with 46% of those who adjusted their status in 2015. Only 4% of new arrivals came in an employment category.

Both adjustments and new arrivals could be even more numerous were it not for limits on some admission categories and the per-country limit. For example, in one employment-related category, people from India applying for permanent residence as skilled employees currently have a 12-year waiting list. In other words, the government currently is processing applications filed in May of 2005.

By age and origin, two different groups of immigrants 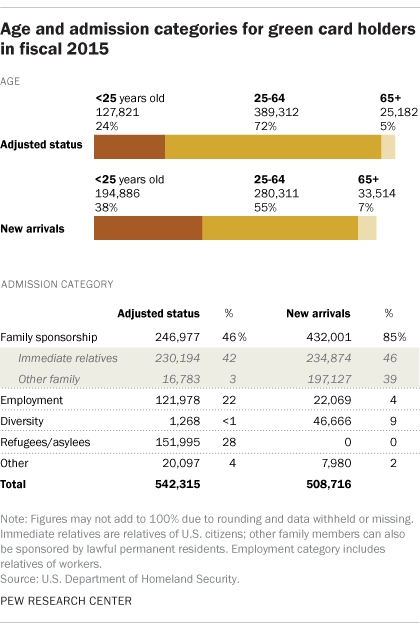 In addition to the differences in their admission categories, green card holders who are new arrivals and those who adjust their status also differ in age and, to some degree, in where they come from, according to a Pew Research Center analysis of the recently released Department of Homeland Security data.

Looked at another way, most granted new green cards in their prime working age (58% in 2015) were those who had adjusted their status. And most people younger than 25 (60%) or those ages 65 and older (57%) were new arrivals.

The top birth countries for both groups included Mexico, China and India (these are also the top origin countries in the overall U.S. immigrant population). But beyond that, the country profiles of these two groups differ somewhat.

Unlike temporary residents, immigrants who become lawful permanent residents are allowed to live and work anywhere in the U.S. They also have a variety of other rights and may apply to become U.S. citizens after meeting length of stay and other requirements.