India and China, the world’s two most populous countries, have long had a competitive relationship and have emerged as major economic powers. But in the digital space, China has a clear advantage. Since Pew Research Center began tracking advanced technology adoption in the two countries in 2013, the Chinese have consistently reported rates of internet and smartphone use that are at least triple that of Indians. That trend has continued through 2016.

The gap between China and India is similarly large when it comes to smartphone ownership alone. Nearly seven-in-ten Chinese (68%) say they own one as of spring 2016, compared with 18% of Indians. Reported smartphone ownership in China has jumped 31 percentage points since 2013, but only 6 points in India over the same time period. And while virtually every Chinese person surveyed owns at least a basic mobile phone (98%), only 72% of Indians can say the same.

The digital divide between the two countries mirrors differences in their broader economic trajectories. Between 2001 and 2011, the share of middle-income Chinese, those making $10.01-$20 a day, jumped from 3% to 18%. In India over the same decade, the middle class share of the population grew from 1% to 3%. In 2015, China’s gross domestic product per capita (PPP) was over five times that of India. Our own research has shown a strong correlation between per capita income and levels of internet access and reported smartphone ownership. Furthermore, some analysts have argued that Chinese investment in digital infrastructure accounts for China’s technological lead over India. 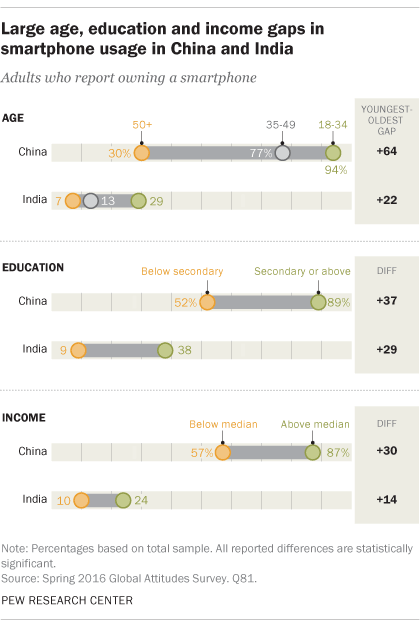 In addition to the difference between China and India, digital divides persist within the countries. As is the case across much of the world, younger, more educated and higher-income Chinese and Indian people are more likely to own a smartphone than their older, less educated and poorer brethren. 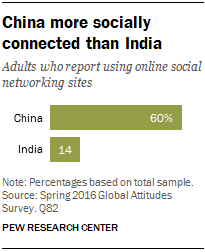 And one more digital gap exists between China and India: social media use. Six-in-ten Chinese say they use social media, compared with only 14% of Indians. Much of this disparity is due to the fact that more people have access to the internet in China. Nearly two-thirds of Indians with internet access (65%) say they use social media. Still, this figure among the Chinese is 84% and has increased sharply since we first began asking the question in 2013.