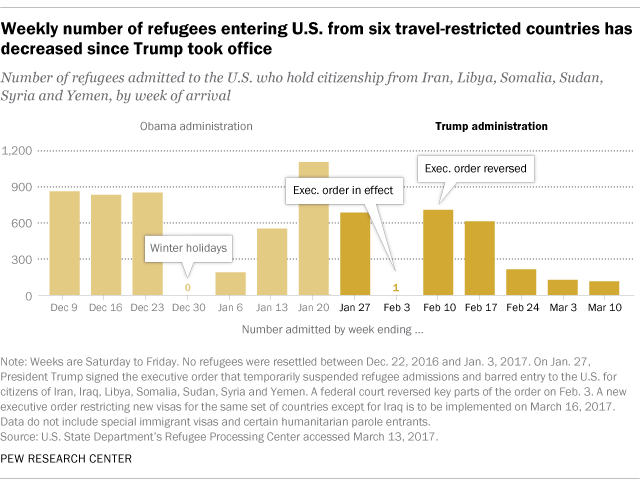 Note: As of March 15, a federal judge had ordered a freeze on the new travel restrictions issued by President Trump.

A total of 2,466 refugees from six countries under new travel restrictions – Iran, Libya, Somalia, Sudan, Syria and Yemen – have resettled in the United States since Donald Trump became president, according to a Pew Research Center analysis of U.S. State Department data. The number of refugees from the six travel-restricted countries represents 32% of all refugees who have entered the U.S. since Trump took office.

Trump recently signed a new executive order, scheduled to take effect March 16, that bars new U.S. visas for 90 days for people holding citizenship from the six nations while security measures in those countries are reviewed. (A previous order that took effect Jan. 27 also barred citizens of Iraq, but parts of it were stopped by the courts.) The new order also suspends refugee admissions to the U.S. from all countries for 120 days, pending a review of security screening measures.

During the first full week of Trump’s presidency (Jan. 21-27), 687 refugees from the six restricted countries entered the U.S., accounting for 34% of all refugee admissions that week. The following week, Jan. 28 to Feb. 3, refugee admissions from the six restricted countries all but stopped after Trump’s original executive order on restrictions took effect. They then resumed shortly after a federal judge in Washington state suspended key parts of Trump’s initial order on Feb. 3 and lifted the travel restrictions, a decision that was upheld by a federal appeals court. (For a look at weekly refugee admissions after the initial executive order, see our earlier analysis.)

Including refugees from countries with no travel restrictions, a total of 7,594 refugees have entered the U.S. during Trump’s first seven weeks in office (Jan. 21 to March 10). Of these refugees, 3,410 are Muslims (45%) and 3,292 are Christians (43%), with other religions or the religiously unaffiliated accounting for the rest.

So far in fiscal 2017 (which began Oct. 1, 2016), refugees who hold citizenship from the six restricted countries have accounted for more than a third (34%) of 37,716 refugee admissions. No more than 12,284 additional refugees may enter the U.S. for the rest of this fiscal year under the terms of Trump’s most recent order, which lowers the annual refugee admissions ceiling to 50,000 – down from 110,000 under the Obama administration.

Before entering the U.S., refugees must be approved by the State Department’s Bureau of Population, Refugees and Migration, a process that includes screening by the State Department, the Department of Homeland Security’s U.S Citizenship and Immigration Services and other federal agencies. Once approved by the bureau, refugees undergo a health screening, and most also go through cultural orientations prior to entering the U.S. The entire process can take 18 to 24 months.