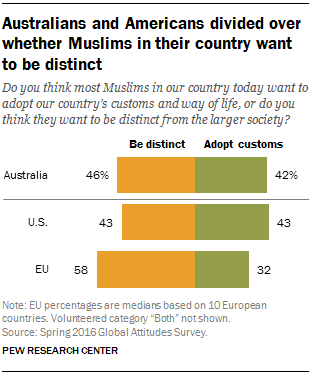 The global surge of refugees in recent years has raised questions not only about border security and immediate aid to those fleeing persecution and conflict, but the challenge of countries settling and assimilating refugees from different cultures. These issues are in the news again in Australia, where a refugee resettlement agreement between the Turnbull government and the United States’ former Obama administration is making headlines.

Many of the refugees in question are from Muslim-majority countries such as Afghanistan, Iran and Iraq. Australians are divided as to whether Muslims in their country want to adopt Australian customs and way of life: 46% say no, while 42% say yes. Americans are evenly split on whether Muslims in the U.S. wish to assimilate, while Europeans are skeptical that Muslims will adopt the customs and traditions of the European countries they now call home.

More generally, half of Australians say that sharing the customs and traditions of the country is very important for anyone to be considered “truly” Australian. Similar shares of Americans (45%) and Europeans (median of 48%) agree that cultural traditions are a very important part of national identity.

In addition to shared culture, about seven-in-ten Australians (69%) and Americans (70%) say that in order to be considered a true national it is very important to speak English. Europeans are more emphatic on the issue of language: A median of 77% say facility in their country’s dominant language is core to national identity. 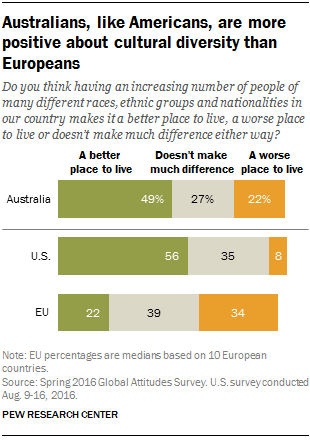 The perceived requirements of being a true Australian notwithstanding, the prevailing view (49%) among the Australian public is that growing cultural diversity makes their country a better place to live. By comparison, a majority of Americans (56%) agree that having an increasing number of people from many different races, ethnic groups and nationalities is a positive for the U.S. In Europe, however, a median of just 22% across 10 European countries surveyed say that growing diversity makes their countries a better place to live.

In Australia, as in most of Europe and the U.S., those on the political left are more willing than those on the right to say that growing diversity is a good thing for the country. The 28-percentage-point gap is very similar to the left-right gap found in the U.S.