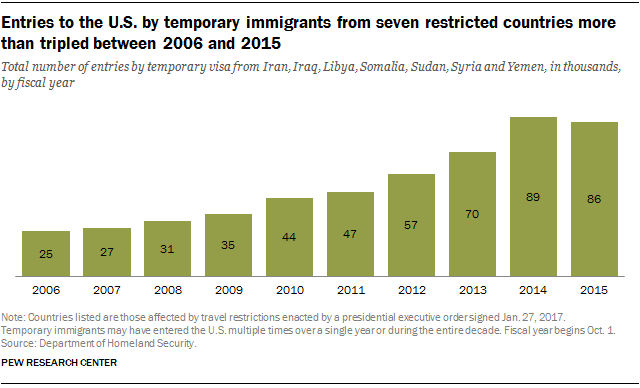 The seven nations affected by a new executive order that prevents many of their citizens from entering the United States for the next 90 days accounted for 904,415 legal U.S. entries between fiscal years 2006 and 2015. This group includes visitors, students and diplomats as well as refugees and new lawful permanent residents, according to a Pew Research Center analysis of government data.

Entries from the affected countries made up 0.2% of the more than 517 million total entries to the U.S. over the same period. (Entries include individuals visiting the U.S. as well as new lawful immigrants and refugees. They do not include unauthorized entries or asylum seekers. One person may account for multiple entries.)

The order, signed by President Donald Trump on Jan. 27, specified that most citizens from Iran, Iraq, Libya, Somalia, Sudan, Syria and Yemen could not enter the U.S. until security procedures used to evaluate visa applications have been reviewed. (Diplomats and those traveling with visas for government officials are exempt from the ban.) The president’s new order also temporarily halted the U.S. refugee resettlement program for 120 days and indefinitely banned most Syrian refugees.

Prior to the executive order, citizens of the seven restricted countries were able to legally enter the U.S. in several ways. Official data are available on three categories of legal entrants: temporary immigrants, refugees and new lawful permanent residents.

Government data are unavailable for those who entered as naturalized U.S. citizens, dual nationals (citizens of any two countries) or U.S. lawful permanent residents after their first entry into the U.S. It remains unclear how the executive order may impact their entry into the United States.

More than half (510,821) of the total legal U.S. entries from Iran, Iraq, Libya, Somalia, Sudan, Syria and Yemen between fiscal 2006 and 2015 were admitted using temporary non-immigrant visas. Those on temporary visas were mostly visitors to the U.S., but could also include students, businesspeople, short-term workers and diplomats, according to an analysis of Department of Homeland Security data. Over the period in question, the number of temporary visa entries from the seven countries more than tripled: from 25,000 in 2006 to 86,000 in 2015. (Temporary immigrants represent events and not unique individuals; individuals may have entered the U.S. multiple times during a fiscal year.) 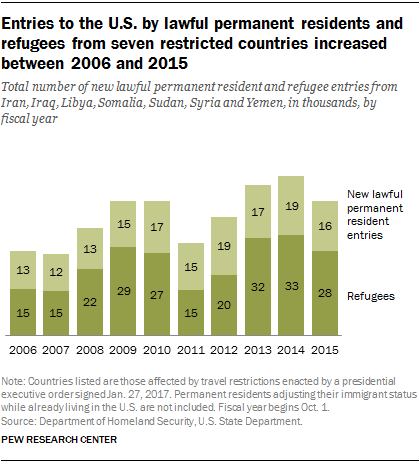 The annual number of new lawful permanent residents entering from Iran, Iraq, Libya, Somalia, Sudan, Syria and Yemen also increased between fiscal years 2006 and 2015, from 12,594 to 16,103 arrivals. This is a group that can include family members of U.S. citizens, special immigrants like Iraqi translators, and awardees of the diversity immigrant visa program. In all, 157,626 people entered the U.S. between 2006 and 2015 as new lawful permanent residents from these seven nations, with nearly half (44%) from Iran.

Of the seven restricted countries, Iran had the largest total number of legal entrants into the U.S. (310,182) between 2006 and 2015. Two-thirds (67%) of these entrants arrived in the U.S. on temporary visas. Iraq had the second highest number of entrants (254,483). However, nearly half (49%) arrived as refugees, compared with 40% who entered as temporary immigrants.