Although confidence in Russian President Vladimir Putin’s leadership is low across Western Europe, those who favor right-wing populist parties are significantly more likely than those who do not to express confidence in Putin, as well as to prefer to move past disputes over Russia’s foreign policy in favor of a strong economic relationship, according to a Pew Research Center survey conducted in spring 2016. 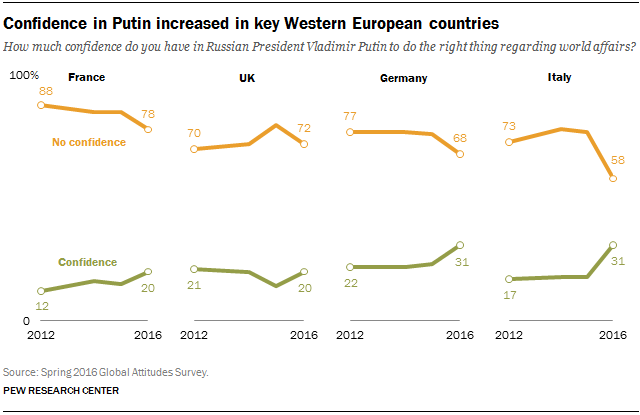 This trend comes at a time when the U.S. is engaged in its own debate about its stance toward Russia and Putin. A recent Pew Research Center report found that Democrats are significantly more negative toward Russia’s president than are Republicans, though majorities of both parties view Putin negatively.

Debate over national identity and the specter of Russian interference loom over Europe as people in France, Germany and the Netherlands head to the polls this year.

Nearly all Europeans surveyed have made up their minds about Putin, and most lack confidence in him. But confidence in his leadership increased in 2016 in Germany and France, which both hold elections this year. It also increased significantly in Italy, a country going through a period of political turmoil following former Prime Minister Matteo Renzi’s resignation last month.

The largest increases in confidence were in Germany and Italy, where 31% of the public in each country expressed confidence in Putin in 2016 compared with 22% of Germans and 17% of Italians in 2012. Notably, the survey was fielded before revelations of Russian hacking in the U.S. presidential election and the subsequent increase in anxiety ahead of European elections. 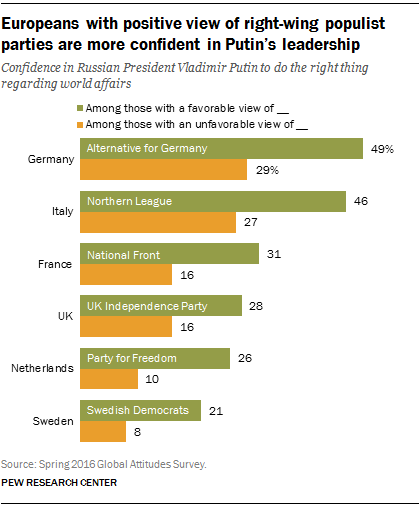 Within these countries, those who hold favorable views of right-wing populist parties – like the Alternative for Germany (AfD) or Italy’s Northern League – are more likely to express confidence in Putin than those who hold unfavorable views of those parties. Just about half of those who give positive ratings to the AfD and 46% who favor the Northern League say they are confident Putin will do the right thing regarding world affairs.

In France, those partial to the right-wing National Front (FN) are about twice as likely as those with negative views of the FN to say they are confident in Putin’s leadership (31% vs. 16%). And those who view Geert Wilders’ Dutch Party for Freedom favorably are nearly three times as likely as the party’s detractors to express confidence in Putin (26% vs. 10%). 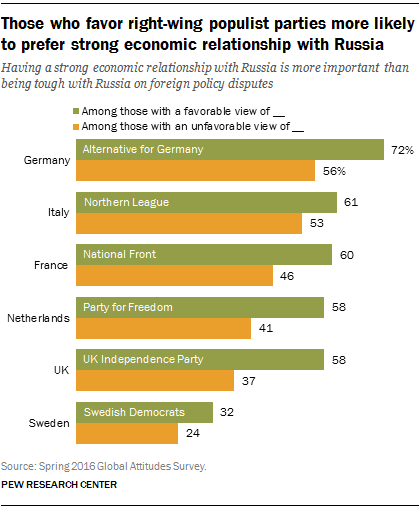 Nearly three-quarters (72%) of those favorable to the AfD and six-in-ten of those favorable to the National Front want a stronger economic relationship with Russia over an adversarial geopolitical one. In the Netherlands, those who view the right-wing Party for Freedom favorably are 17 percentage points more likely to say they prefer having strong economic ties with Moscow to being tough with Russia on foreign policy disputes; in the UK, the difference between the competing views is an even wider 21 points.

Supporters of European populist parties stand out on key issues, from EU to Putin
Views of Russia and Putin remain negative across 14 nations
Few across 17 advanced economies have confidence in Putin
Russia and Putin receive low ratings globally
How people around the world see the U.S. and Donald Trump in 10 charts