In the aftermath of Fidel Castro’s death and the election of Donald Trump, Americans continue to express support for the recent thaw in U.S.-Cuba relations. Yet the U.S. public remains skeptical about whether the island nation will become more democratic in the coming years. 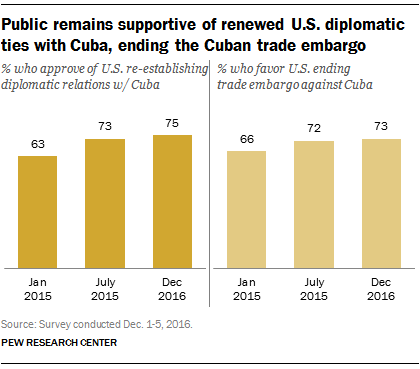 Three-quarters of U.S. adults (75%) approve of the decision last year to re-establish U.S. relations with Cuba, while nearly as many (73%) favor ending the long-standing U.S. trade embargo against Cuba, according to a new national survey by Pew Research Center conducted Dec. 1-5.

Castro died on Nov. 25 after leading his country for nearly 50 years. Trump subsequently warned on Twitter that he may cut U.S. ties with Cuba “if Cuba is unwilling to make a better deal for the Cuban people, the Cuban-American people and the U.S. as a whole.” 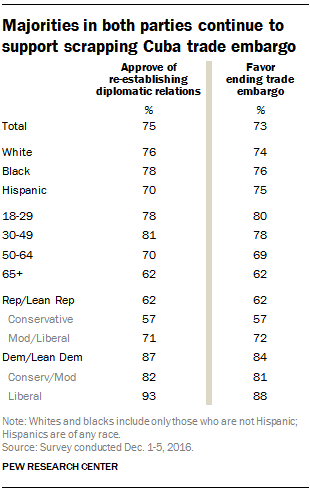 There continue to be partisan differences in views of U.S. policy toward Cuba: Democrats are more likely than Republicans to support diplomatic ties and an end to the U.S. trade embargo.

Still, most Republicans and Republican-leaning independents approve of the re-establishment of diplomatic relations with Cuba (62%) and favor ending the U.S. trade embargo (62%). Even larger majorities of Democrats and Democratic leaners back these two policies (87% and 84%, respectively).

As with overall opinions about U.S. ties with Cuba, the partisan pattern in these views has changed little since last year.

Support for the two policies is somewhat higher among adults younger than 50 than those ages 50 and older. For example, 78% of those ages 18-29 approve of the re-establishment of diplomatic relations with Cuba, and 80% favor ending the U.S. trade embargo. Among those 65 and older, 62% approve of re-establishing diplomatic relations, and the same share favors ending the trade embargo. 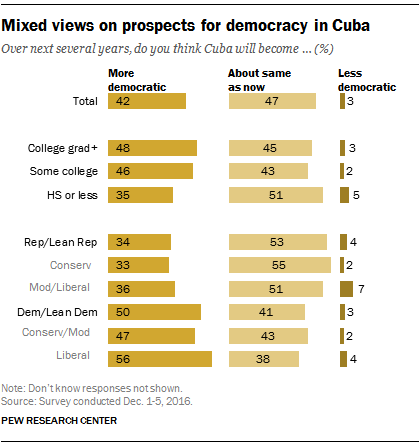 Among college graduates, 83% approve of re-establishing diplomatic relations with Cuba, and 80% favor ending the U.S. trade embargo. Most of those with lower levels of education also back these two policies, but by somewhat smaller margins.

Republicans remain more skeptical than Democrats that Cuba will become more democratic in the next few years.

Note: Topline for this post can be found here (PDF), and the methodology is here.