Significant growth in the number of Latino eligible voters has helped make the U.S. electorate more racially and ethnically diverse than ever this year. According to Pew Research Center projections, a record 27.3 million Latinos are eligible to cast ballots, representing 12% of all eligible voters. 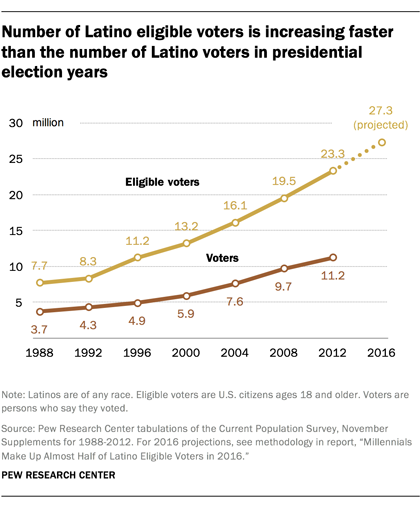 Latinos have favored the Democratic Party over the Republican Party in every presidential election since at least the 1980s, but their electoral impact has long been limited by low voter turnout and a population concentrated in non-battleground states. Despite large growth in the number of eligible Latino voters, it remains to be seen whether their turnout will set a record in November.

Here are key facts about the Latino vote in 2016. 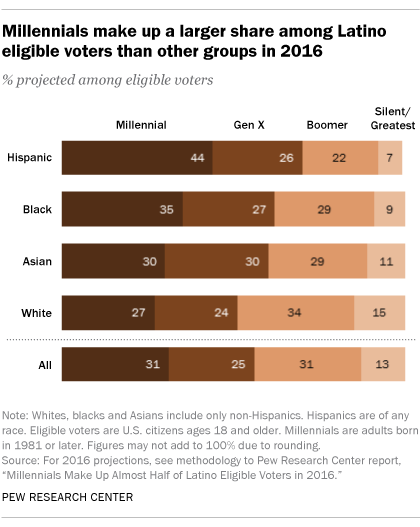 2Among Latino registered voters who are “absolutely certain” they will vote, one-in-five will be voting for the first time, according to Pew Research Center’s National Survey of Latinos, published this month. Among Millennial voters, 36% say they will be casting a ballot for the first time, compared with 9% of non-Millennial voters ages 36 and older.

3There are only a handful of competitive states in this year’s presidential election where Latinos account for a significant share of the vote. Out of seven competitive states, Latinos have a significant presence in three: Arizona (22%), Florida (18%) and Nevada (17%). Latinos make up 5% or less of eligible voters in each of the remaining four: Georgia, Iowa, North Carolina and Ohio. At the same time, the impact of the Latino vote on the presidential race is lessened by the fact that more than half (52%) of all Latino eligible voters live in the non-battleground states of California, Texas and New York. 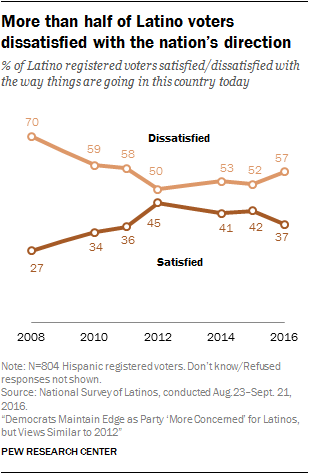 5A slightly lower share of Latino registered voters say they are sure they will vote this year compared with four years ago. This year, 69% of Latinos are “absolutely certain” they will vote in November, down from 77% in 2012. In past elections, the Latino voter turnout rate has lagged that of other groups. For example, in 2012 Latinos had a turnout rate of 48%, compared with 67% for blacks and 64% for whites.

8Three-quarters of Hispanic registered voters say they have discussed Trump’s comments about Hispanics or other groups with family, friends or coworkers. Those who have discussed Trump’s controversial comments on Hispanics, Mexican immigrants and other groups in the past year have given more thought to the election and are more certain they will vote.