The number of Hispanic eligible voters has grown at one of the fastest clips of any group over the past eight years and is projected to be 40% higher in 2016 than in 2008, according to a new Pew Research Center analysis of government data. U.S.-citizen Hispanics who turn 18 are the primary source of new eligible voters as some 803,000 young U.S.-citizen Hispanics enter adulthood each year and become eligible to vote. This chapter explores the demographics and geography of Hispanic eligible voters, among other topics.

How Many Hispanic Eligible Voters in 2016? 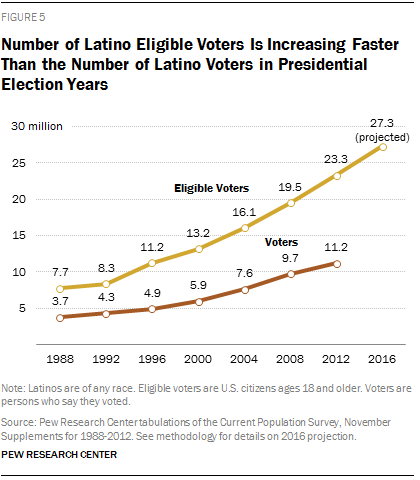 There have been other, smaller sources of growth. The first is immigrant Latinos who obtain U.S. citizenship. From 2008 to 2016, some 2.2 million foreign-born Latinos are projected to have naturalized, becoming U.S. citizens and thus eligible to vote, according to Pew Research Center projections.3 The second is a growing outmigration from Puerto Rico to the U.S. mainland. Between 2008 and 2016, a net increase of 227,000 Puerto Rican adults moved to the U.S. mainland, becoming eligible to vote in U.S. presidential elections.4 Florida has been the single largest destination state for most Puerto Rican migrants in recent years (Krogstad, 2015c). As a result, Puerto Rican migrants in Florida could have a large impact on Florida’s Latino vote (Krogstad, Lopez and López, 2015). 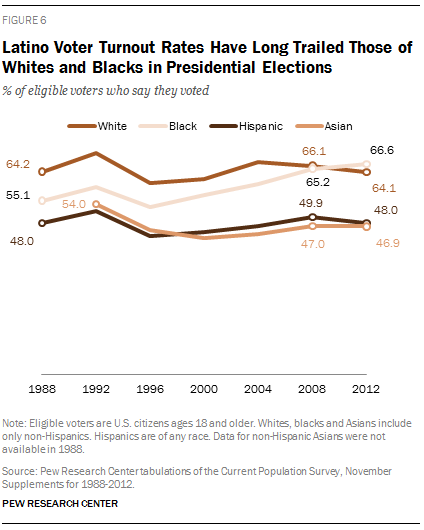 Changes in the Hispanic Electorate Since 2000

Educational Attainment on the Rise 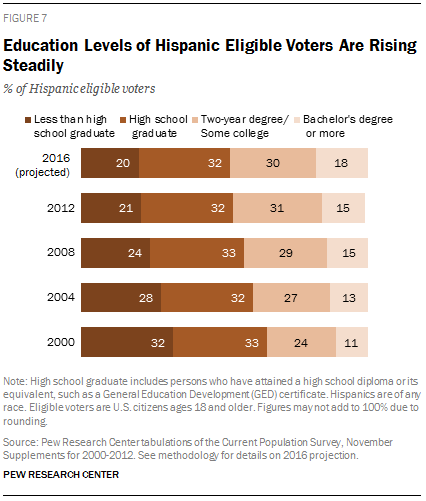 By comparison, in 2000 about equal shares of Latino eligible voters had completed at least some college and not finished high school: 36% had attended college—24% with some college experience and 11% with a bachelor’s degree, while 32% did not finish high school.

As the share of Hispanic eligible voters with at least some college experience has increased, the share with less than a high school education has declined sharply, from 32% in 2000 to a projected 20% in 2016. At the same time, the share of Hispanic eligible voters who are high school graduates has remained at about 32%. These changes reflect broader educational trends among all Hispanics as a greater number and share of young Hispanics attend college (Krogstad, 2015a). 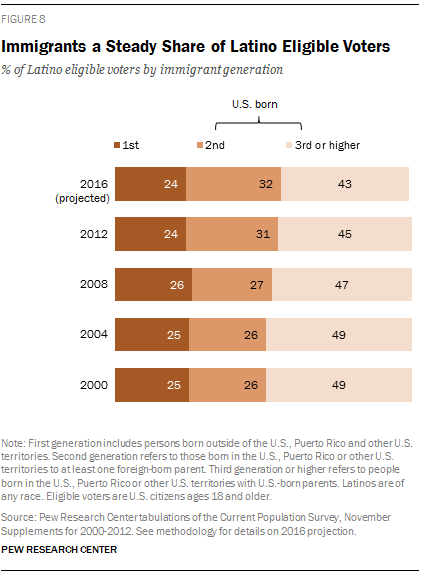 This stable share of the foreign born among Latino eligible voters contrasts with that seen among the nation’s Latino population overall. Since 2000 (Krogstad and Lopez, 2014a), the immigrant share among Latinos has declined from 40% then to 35% in 2013 as U.S. births have overtaken new immigrant arrivals as the main driver of Latino population growth (López and Patten, 2015). 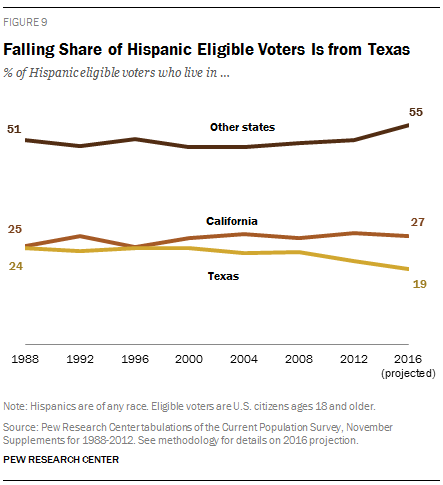 In addition to California and Texas, there are four states where Hispanics will make up at least 15% of eligible voters in 2016: Florida, Arizona, New Mexico and Nevada. 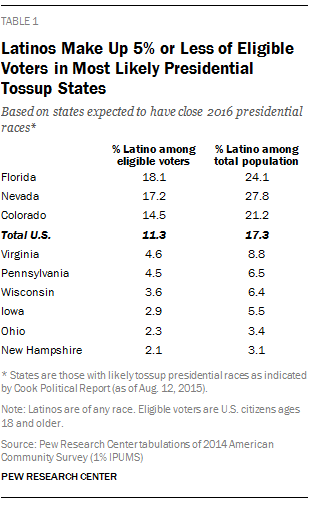 Though the 2016 Republican and Democratic presidential nominees are yet to be selected, the Cook Political Report projects that nine states—Colorado, Florida, Iowa, Nevada, New Hampshire, Ohio, Pennsylvania, Virginia and Wisconsin—that represent 115 out of a total 538 electoral votes could be tossups.

Latinos make up more than one-in-ten eligible voters in three of these key states—Florida (18.1%), Nevada (17.2%) and Colorado (14.5%). In each of these states, Latinos also represent a larger share of the electorate than the national Latino eligible voter share of 11.3%.

But in the six remaining tossup states, Latinos comprise 5% or less of the total eligible voter population. For example, in New Hampshire only 2.1% of eligible voters are Latino. 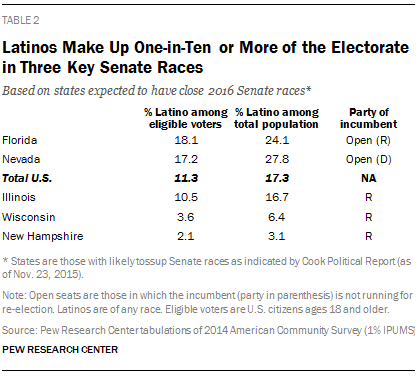 There are five Senate races that the Cook Political Report has identified as likely to have close races—Florida, Illinois, Nevada, New Hampshire and Wisconsin. In four of these states, the incumbent is a Republican. 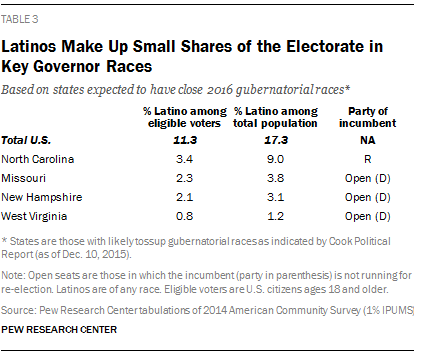 When it comes to the 12 gubernatorial races that will take place in the fall, just four—Missouri, New Hampshire, North Carolina and West Virginia—have been identified as tossups.

Each of these states has low shares of Latinos among their electorate. In West Virginia, Latinos make up 1% of all eligible voters. Latinos comprise just 2% of eligible voters in Missouri and New Hampshire, and they make up 3% of the electorate in North Carolina.

Next: 2. Looking Back to 2014: Latino Voter Turnout Rate Falls to Record Low
← Prev Page
Page1You are reading page2Page3Page4Page5Page6Page7Page8
Next Page →