Discussions of the “digital divide” often touch on race and ethnicity – and the narrative is often that whites lead in technology adoption while other racial or ethnic groups struggle to keep up. But a new analysis of four Pew Research Center surveys conducted in 2015 finds that this isn’t true for one group: English-speaking Asian Americans adopt a number of common technologies at rates that exceed the rest of the population, including whites.

Here are three key findings relating to English-speaking Asian Americans and technology use: 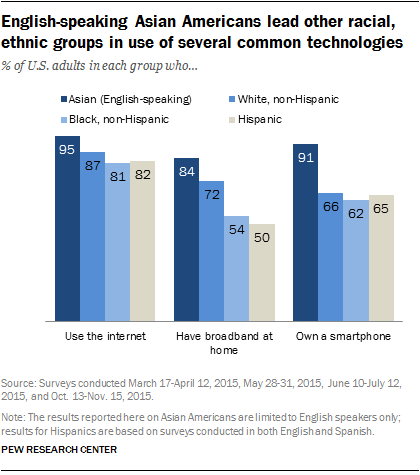 One reason English-speaking Asian Americans are adopting these technologies at higher rates may be their high levels of educational attainment and household income relative to the rest of the population. Both factors are tightly linked with technology adoption rates.

In addition, as noted above, the figures reported here are based on surveys conducted in English only among samples of Asian Americans. While Pew Research Center has not conducted surveys of Asian Americans and their technology use in languages other than English, surveys of Hispanics indicate that English-language proficiency is highly correlated with the use and adoption of various technologies.

The analysis in this blog post is based on four Pew Research Center surveys conducted March 17-April 12, 2015; May 28-31, 2015; June 10-July 12, 2015; and Oct. 13-Nov. 15, 2015. The May survey was not included in the analysis of English-speaking Asian Americans with broadband at home. The table below shows the number of surveys and interviews conducted for each subgroup of Asian Americans respectively, as well as the margin of error for each sample.