It’s less common today for American children to have a family like the ones portrayed on television in the 1950s and ’60s. One of the biggest reasons is a dramatic rise in kids living with a single parent. 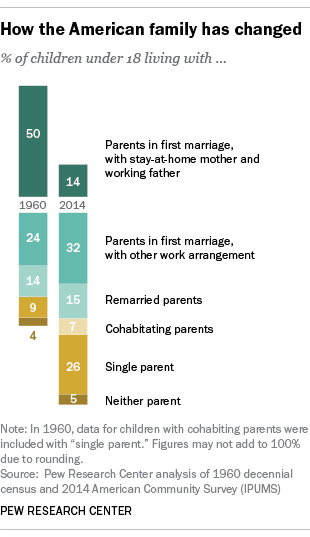 In 2014, just 14% of children younger than 18 lived with a stay-at-home mother and a working father who were in their first marriage. This marks a dramatic decline from the height of the postwar baby boom, when these kinds of households were more common.

But even then, what some people hold up as the quintessential “traditional” family type was far from universal: In 1960, just half of children were living in this type of arrangement. By 1980, the share had dropped to 26%. It continued to decline until the 1990s, and has since remained fairly stable, according to a new Pew Research Center analysis of Census Bureau data.

One of the biggest changes has been the increase in kids living with single parents – up to 26% from 9% in 1960. An additional 7% of children today are living with two parents who are not married. This, in turn, relates to increases in divorce, as well as higher shares of births occurring outside of marriage; in 1960, 5% of births occurred to unmarried women, a share that has since increased eightfold to 40%.

As more mothers enter the workforce, the share of stay-at-home moms has also declined. In the late 1960s, about half of mothers with children younger than 18 stayed at home full-time, compared with only three-in-ten today. (About 7% of fathers who live with their kids are stay-at-home dads.) 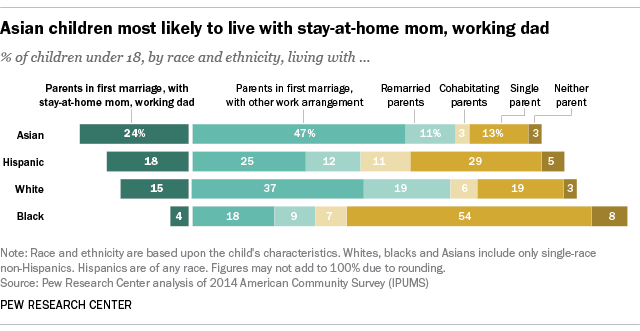 Family arrangements are linked to economic outcomes, which in turn are associated with the environment in which kids are raised, according to a Pew Research Center report. Kids living in cohabiting families or single-parent families are two to three times more likely than kids in married-parent families to be living in poverty. And those kids living with two full-time working parents are better off financially than those living with a working dad and a stay-at-home mom.

At the same time, kids from less well-off families are less likely to be living in a neighborhood that their parents deem an excellent or good place to raise children than are kids from more affluent families. The parents of less affluent children are also far more likely to worry about the physical safety of their children than more affluent parents – 47% of parents with family income below $30,000 worry that their child could get shot at some point, versus 22% of parents with family income of $75,000 or more, for instance.