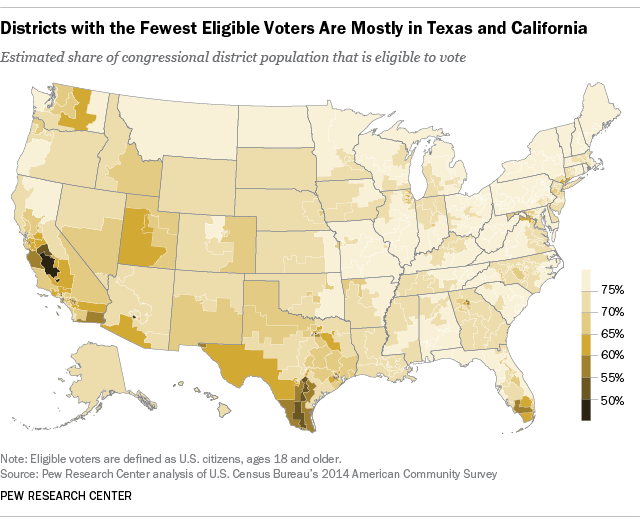 The U.S. Supreme Court heard arguments recently in a Texas case that challenges the way nearly every U.S. voting district – from school boards to Congress – is drawn. The case asks the court to specify what the word “person” means in its “one person, one vote” rule. The outcome of the case could have major impacts on Hispanic voting strength and representation from coast to coast.

Ever since a series of landmark rulings in the 1960s, districts have been drawn “as nearly of equal population as is practicable.” (As Supreme Court Chief Justice Earl Warren wrote for the majority in Reynolds v. Sims, “Legislators represent people, not trees or acres. Legislators are elected by voters, not farms or cities or economic interests.”) The high court didn’t directly say what “equal population” meant, but states and localities have almost invariably used total population figures. And that population is determined by the decennial census.

However, the appellants in the Texas case, Evenwel v. Abbott, argue that districts instead should be drawn to have equal numbers of eligible voters. (The case involves redistricting within states, not reapportioning congressional seats among states.)

The distinction between residents and voters is a big one, because in many states, districts with nearly equal total populations can have dramatically different numbers of eligible voters (that is, U.S. citizens ages 18 and older).

We approximated the disparity using 2014 demographic data for all 435 U.S. House districts from the Census Bureau’s American Community Survey. Eligible voters ranged from 81.2% of the population (Florida’s 11th District, located north of the Tampa Bay area) to 43.2% (California’s 40th District, comprising East Los Angeles and adjacent communities). California’s 40th, in fact, has barely half as many voting-age citizens (308,347) as Oregon’s 4th District (604,980, the most of any district in a multi-district state).

As the map (above) and chart (right) might suggest, there’s a strong negative correlation between share of eligible voters and share of Hispanic population. Of the 25 districts with the highest Hispanic population shares, 18 also are among the 25 districts with the lowest eligible-voter share. This is because so many Hispanics aren’t eligible to vote, either because they’re not U.S. citizens or because they’re younger than 18. By our calculations, only about 46% of the nation’s more than 55 million Hispanics are eligible to vote.

What would happen if the Supreme Court were to rule in favor of the Texas appellants (who, it should be noted, already have lost at the district-court level) is unknown. One possibility is that districts with relatively few eligible voters would be redrawn to include more of them – which could mean bringing more whites and Republicans into what are now largely Hispanic, Democratic-voting districts, or combining such districts to bring up the eligible-voter population. And that, in turn, could affect Hispanic representation in the House, which has risen from five in 1973 to 17 in 1993 and 28 in 2013. 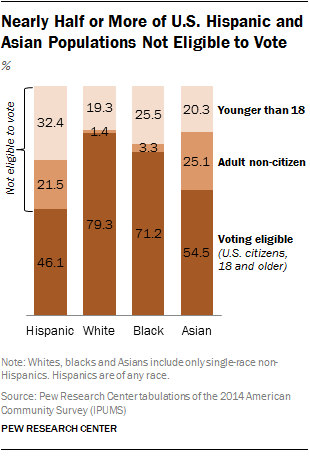 This could also have an outsize impact on the representation of Asian Americans – just 55% of the more than 16 million Asians in the U.S. are adult citizens. By comparison, large majorities of whites (79%) and blacks (71%) are citizens of legal voting age. (Asian American representation in the House has risen from two in 1973 to four in 1993 and 10 in 2013.)

All of this should be taken as illustrative rather than definitive. There are factors beyond age and U.S. citizenship that affect eligibility, such as residency rules, imprisonment, prior felony convictions and mental incompetency; our data don’t address those other factors. In addition, Americans living overseas may be eligible to vote but aren’t covered by the American Community Survey. (Two political scientists, Samuel Popkin and Michael McDonald, addressed those issues in an influential 2001 paper on turnout rates.)

Most important, while the American Community Survey asks about immigration and U.S. citizenship status, the decennial census does not. And because the decennial census counts everyone (which the ACS, being a sample-based survey, does not), it has been the only source of data for drawing district lines (a point addressed at length in an amicus brief filed by several political scientists). That means that if the Supreme Court requires districts to be drawn with equal numbers of eligible voters, it may also have to decide just how those eligible-voter numbers are to be determined.

Note: This post was originally published on June 3 and has been updated.

Most U.S. citizens report a campaign contacted them in 2020, but Latinos and Asians less likely to say so

Racial, ethnic diversity increases yet again with the 117th Congress

Black, Latino and Asian Americans have been key to Georgia’s registered voter growth since 2016