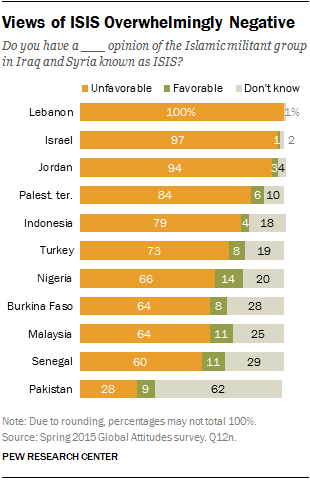 Recent attacks in Paris, Beirut and Baghdad linked to the Islamic State in Iraq and Syria (ISIS) have once again brought terrorism and Islamic extremism to the forefront of international relations. According to newly released data that the Pew Research Center collected in 11 countries with significant Muslim populations, people from Nigeria to Jordan to Indonesia overwhelmingly expressed negative views of ISIS.

One exception was Pakistan, where a majority offered no definite opinion of ISIS. The nationally representative surveys were conducted as part of the Pew Research Center’s annual global poll in April and May this year.

In no country surveyed did more than 15% of the population show favorable attitudes toward Islamic State. And in those countries with mixed religious and ethnic populations, negative views of ISIS cut across these lines.

In Lebanon, a victim of one of the most recent attacks, almost every person surveyed who gave an opinion had an unfavorable view of ISIS, including 99% with a very unfavorable opinion. Distaste toward ISIS was shared by Lebanese Sunni Muslims (98% unfavorable) and 100% of Shia Muslims and Lebanese Christians.

Six-in-ten or more had unfavorable opinions of ISIS in a diverse group of nations, including Indonesia, Turkey, Nigeria, Burkina Faso, Malaysia and Senegal. 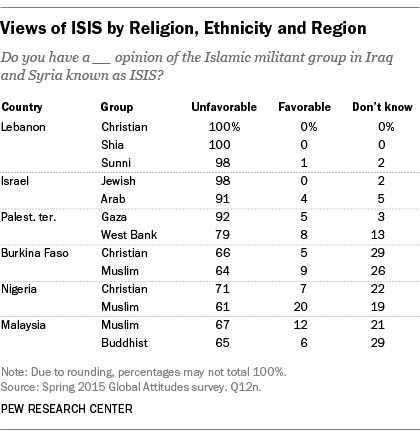 In Nigeria, there was somewhat more support for ISIS (14% favorable) compared with other countries, but attitudes differed sharply by religious affiliation. An overwhelming number of Nigerian Christians (71%) had an unfavorable view of ISIS, as did 61% of Nigerian Muslims. However, 20% of Nigerian Muslims had a favorable view of ISIS when the poll was conducted in the spring of this year. The group Boko Haram in Nigeria, which has been conducting a terrorist campaign in the country for years, is affiliated with ISIS, though the two are considered separate entities.

Only 28% in Pakistan had an unfavorable view of ISIS, and a majority of Pakistanis (62%) had no opinion on the extremist group.

General concern about Islamic extremism has been growing in many Western and predominantly Muslim nations surveyed since earlier in the decade. And as a reaction to this threat, there was widespread support for U.S. military actions against ISIS in Iraq and Syria from most of the countries surveyed in the spring, including majorities in Israel (84%), France (81%), the U.S. (80%), Lebanon (78%), Jordan (77%), the UK (66%) and Germany (62%).

Note: See here for topline results on views of ISIS in these 11 nations and methodology.

Muslims and Islam: Key findings in the U.S. and around the world
U.S. international relations scholars, global citizens differ sharply on views of threats to their country
15 striking findings from 2015
6 facts about religious hostilities in the Middle East and North Africa
Majorities in Europe, North America worried about Islamic extremism