It’s a fascinating time for conversations about faith in the United States, with Pope Francis set to visit next month, a presidential election on the horizon and major trends reshaping the country’s religious landscape.

One of the most important and well-documented shifts taking place over the past decade is the steadily rising share of people who are religiously unaffiliated – from 16% in 2007 to 23% in 2014. As journalists and others gather in Philadelphia for the annual Religion Newswriters Association conference this week, here are 10 other things we’ve learned from our recent research:

1Protestants no longer make up a majority of U.S. adults. Closely tied to the rise of the religious “nones” is the decline of Christians, including Protestants. The U.S. has a long history as a majority Protestant nation, and, as recently as the 2007 Pew Research Center Religious Landscape Study, more than half of U.S. adults (51.3%) identified as Protestants. But that figure has fallen, and our 2014 study found that 46.5% of Americans are now Protestants.

2Religious switching is a common occurrence in the U.S. Depending on how “religious switching” is defined, as many as 42% of U.S. adults have switched religions. That definition counts switching between Protestant traditions, but even if Protestantism is regarded as a single group, about a third of Americans (34%) identify with a different religious group than the one in which they were raised. 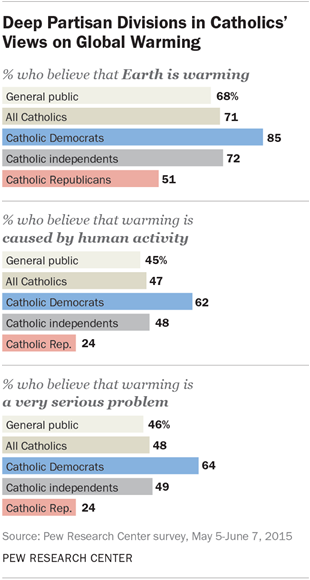 Before Pope Francis’ encyclical on the environment was published in June, U.S. Catholics’ views of climate change mirrored those of Americans overall – including major partisan divisions. While six-in-ten Catholic Democrats say global warming is caused by humans and that it is a very serious problem, only about a quarter of Catholic Republicans feel the same way.

5In a typical week, about one-in-five Americans share their faith online. This is about the same as the number who tune in to religious talk radio, watch religious TV programs or listen to Christian rock music.

6Americans have continued to become more supportive of same-sex marriage. Aggregated data from 2015 polls show that fully 55% of U.S. adults favor same-sex marriage, which is now legal nationwide following a Supreme Court ruling in June. That represents a rise of 20 percentage points over the last decade or so. Among the major religious groups, White evangelical Protestants are the least supportive of gay marriage (24%), while those without any religious affiliation are the most likely to favor allowing gays and lesbians to wed (82%).

9Frequency of religious service attendance remains a strong predictor of how people will vote in elections. In the 2014 midterm elections, exit polls showed that those who attend worship services at least weekly voted for Republicans over Democrats for the House of Representatives by a 58%-to-40% margin. Meanwhile, those who never attend services leaned heavily toward Democrats (62% vs. 36%).

10Christians continue to make up an overwhelming majority of members of Congress (92%), compared with 71% of the general public (as of 2014). At the same time, while 23% of U.S. adults are religiously unaffiliated, only one member of Congress (Rep. Kyrsten Sinema, D-Ariz.), or 0.2% of that body, claims no religious affiliation. 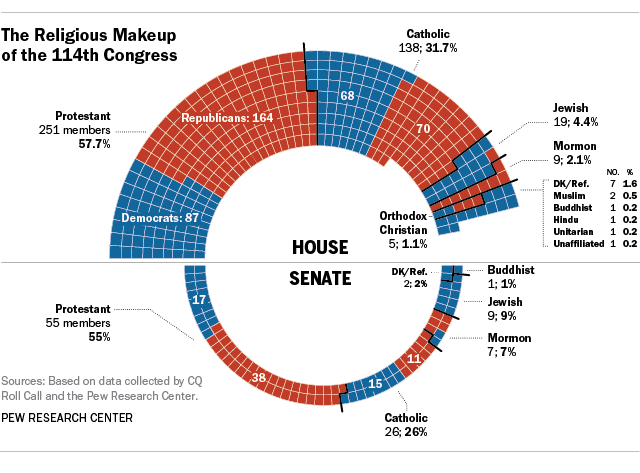