In the 2014 midterm elections, the Republican Party enlarged its majority in the U.S. House of Representatives with continued strong support from white evangelicals and people who attend religious services regularly. In addition, the GOP appears to have made inroads among some religious constituencies that traditionally have not been as supportive of Republican candidates. 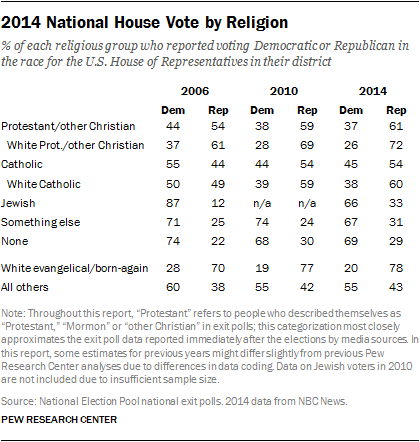 Voters who attend religious services occasionally (rather than more frequently), for instance, voted for Republican candidates at higher rates than in the 2006 midterms, the last time midterm exit polls included a comparable question about worship attendance. Jewish voters also appear to have moved somewhat in the Republican direction compared with 2006 (the last midterms that included enough Jewish voters in the exit polls to analyze). However, in 2014, Jewish voters supported Democratic congressional candidates at rates similar to those seen in the 2012 presidential election year.

National Election Pool (NEP) exit poll data reported by NBC News show that about seven-in-ten white Protestants (72%) voted for Republican candidates in their congressional districts, roughly the same share as in 2010 (69%). Among white voters who describe themselves as evangelical or born-again Christians (a group that, in addition to Protestants, includes some Catholics and members of other faiths), a strong majority (78%) voted Republican in 2014, just as they did in 2010 (77%).1

This year’s exit poll data show little to no change in the voting patterns of Catholics since the 2010 congressional elections. Catholics voted for Republican House candidates over Democratic candidates by a 54%-45% margin in 2014, and white Catholics supported the GOP over the Democratic Party by a 22-point margin (60% to 38%) this year, similar to 2010.

Groups that have traditionally voted Democratic did so again this year. Among those with no religious affiliation, 69% voted for Democrats, as did 66% of Jewish voters. However, Democrats appear to have lost some ground with Jews since the 2006 midterm cycle, the last midterm elections in which a sufficiently large number of Jewish voters were included in the exit poll to analyze their voting patterns. In 2006, Jewish voters favored Democratic candidates over Republicans by a 75-point margin (87% to 12%). In 2014, by contrast, the margin of victory for Democratic House candidates among Jewish voters nationwide was 33 points (66% to 33%). The 2006 election, however, represents the high-water mark of Jewish support for Democratic candidates in recent congressional elections. Jewish voters’ level of support for the Democratic Party in 2014 was similar to that seen in the 2012 presidential election year. 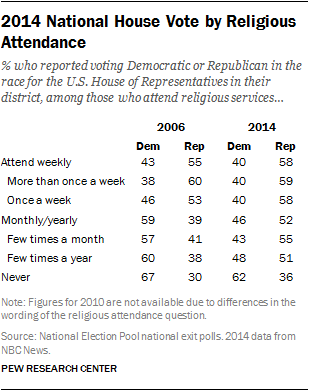 Voters who report attending religious services at least once a week favored Republicans over Democrats this year, just as they did in 2006. (During the 2010 midterms, exit polls asked a different question about frequency of worship attendance, making results difficult to compare.)

Protestants composed just over half (53%) of the 2014 electorate, while Catholics made up roughly a quarter of voters (24%); these figures are little changed compared with the 2006 and 2010 midterm elections. And despite the continued growth of religious “nones” within the population as a whole, the share of the electorate with no religious affiliation also is little changed compared with other recent midterms (12% in both 2010 and 2014).

This preliminary analysis reflects data for 2014 as published by NBC News as of 1:00 p.m. on Nov. 5, 2014. If data are subsequently re-weighted by the National Election Pool (NEP), the consortium of news organizations that conducts the exit polls, the numbers reported here may differ slightly from figures accessible through the websites of NEP member organizations.