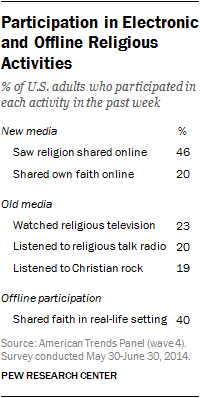 These are among the key findings from a survey conducted in May and June of 2014 that asked 3,217 adults from the Pew Research Center’s nationally representative American Trends Panel whether they had engaged in various kinds of religious activities during the previous week.

The survey suggests that religious engagement through TV, radio, music and the internet generally complements – rather than replaces – traditional kinds of religious participation, such as going to church. Americans who said they frequently attend religious services were more likely to engage in these electronic religious activities than those who said they attend religious services less often. And white evangelicals and black Protestants — two groups with high levels of traditional religious observance — shared their faith online, watched religious TV and listened to religious talk radio more often than other large U.S. religious groups.

The survey also finds that young adults (ages 18-29) are about twice as likely as Americans ages 50 and older to see people sharing their faith online. This pattern reflects broader generational differences in technology adoption and media consumption, with young adults using the internet more than older people do. By contrast, watching religious television is considerably more common among older adults than among those under 30. 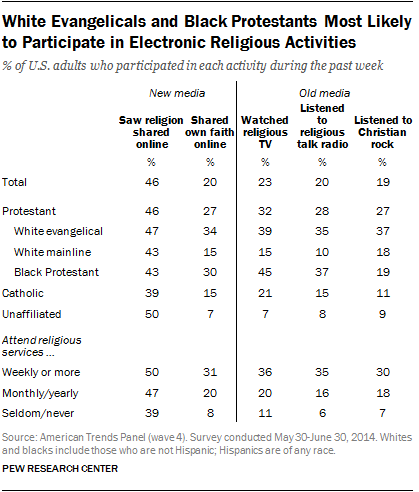 There are smaller differences between religious groups when it comes to seeing other people share their religion on social media websites or apps. For example, 50% of religiously unaffiliated adults say they saw someone else share something about their religious faith on social networking sites or apps during the past week, about the same as the share of white evangelicals (47%) and somewhat higher than the share of Catholics (39%) who report seeing someone else share their faith online. 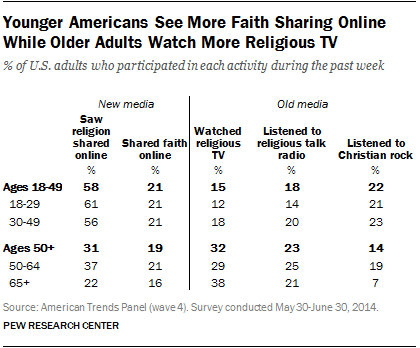 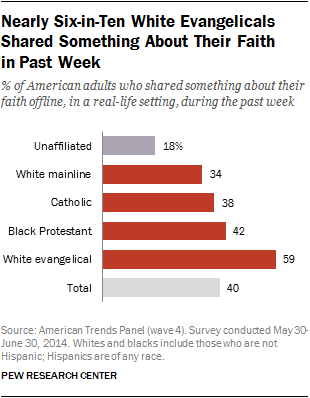 Roughly six-in-ten white evangelical Protestants report that they shared something about their religious faith offline, in a “real-life setting,” during the preceding week.1 Roughly four-in-ten black Protestants (42%) and Catholics (38%) also say they had shared their faith in the previous week, as do 34% of white mainline Protestants. Among religious “nones,” 18% say they had shared something about their religious views offline in the last week.