Texting is the most common and frequent way that teens communicate with all types of friends, from the ones they’ve just met to more established relationships. But teens haven’t abandoned phone calling. A recent Pew Research Center survey on teens, technology and friendship finds that phone calls are an important way that teens connect, particularly with their closest friends. 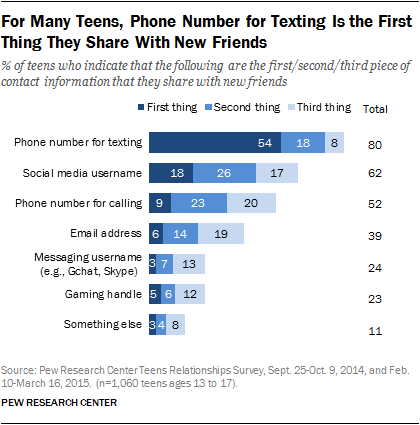 While few teens say the primary way they connect with new friends is through phone calls, teens are more likely to talk with their closest friends by phone.

Teens with close friends also provided their top three ways of reaching these friends. Text messaging was again the most popular, with 80% of teens naming it as one of their top three choices and 49% saying it is the most common way they keep in touch. But phone calls are second: 69% of teens cite phone calls as one of their top choices for talking with their best friends, including 13% who say it’s their most common way of keeping in touch. 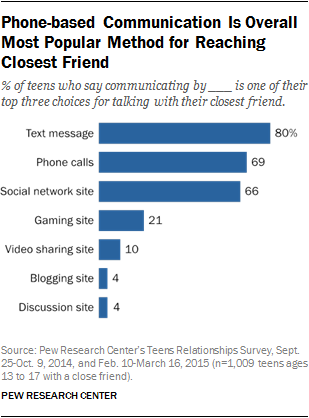 Focus-group data collected by Pew Research Center last year reinforces the notion that teens use different channels of communication depending on the closeness of a friendship. Several teens were wary of giving out their phone numbers to someone whom they had only recently met, including one middle school girl who said: “I don’t really give new people my phone number. I think that’s giving too much information.” Other teens described talking to a new friend over the phone as potentially “weird” or “awkward.”

In focus groups, teens also explained why phone calls are reserved for more intimate relationships. One high school girl said: “If it’s your best friend. You’d be on the phone with them. It’s because you have a lot to talk about. But like if it’s just a regular friend, or you guys just associate from time to time, you typically text them because you don’t really have anything to talk about.”