Benjamin Franklin popularized the sentiment that nothing is certain “except death and taxes.” But the public isn’t too keen on the current federal tax system, with 59% saying there is so much wrong that Congress should completely change it (38% say it works pretty well and needs only minor changes).

As April 15 rolls around yet again, here are five facts about Americans’ views of taxes. 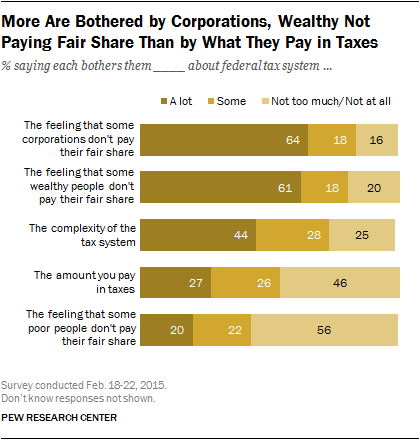 3Not everybody dreads Tax Day. In fact, about one-third (34%) like or even love doing their taxes, according to an April 2013 Pew Research survey. The most common reason that people gave for their enjoyment was the expectation of a refund. Indeed, Uncle Sam issued more than 109 million refunds during last year’s filing season, with an average refund amount of $2,792. Still, 56% said they dislike doing their taxes and most commonly cite the complicated paperwork or the inconvenience and the amount of time it takes to do their taxes. (Click here to see a sampling of people’s own words on how they feel about taxes.)

4The IRS gets mixed reviews from the public, in contrast to the favorable ratings given to many public agencies. Just 45% of Americans have a favorable rating of the IRS, compared with 48% who rate it unfavorably. (This sentiment has changed little in the last several years.) Partisans are greatly divided when it comes to the IRS. While a majority of Democrats have a positive view of the agency (62% favorable), Republicans, especially Tea Party Republicans, dislike the IRS. Among Republicans and Republican-leaning independents who agree with the Tea Party, 15% are favorable toward the IRS and 82% are unfavorable.

5Only 6% of Americans think it is morally acceptable for people not to report all their income on their taxes, according to a January 2013 Pew Research survey. The vast majority of the public (71%) says this practice is morally wrong, while 19% think failure to report income isn’t a moral issue. Few of any partisan persuasion think that not reporting their full income is morally acceptable: Republicans (5%), Democrats (7%) and independents (5%) are about as likely to say this. However, Republicans are more likely than Democrats to call this morally wrong (78% vs. 68%), while Democrats are more likely to frame it as “not a moral issue” (21% vs. 15%).