President Obama’s new policy on Cuba opens the door to establish ties with the country for the first time in a half century. But this change comes as the Cuban American population itself is changing—in its demographics, views of U.S.-Cuba policy, and its politics. 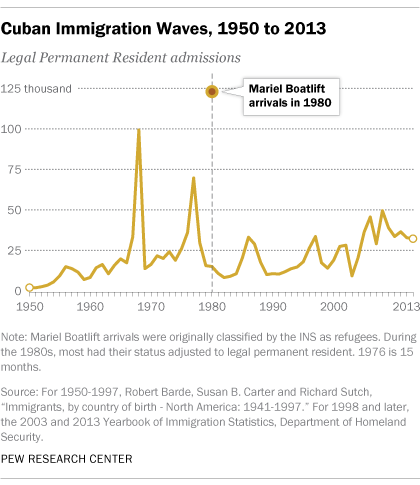 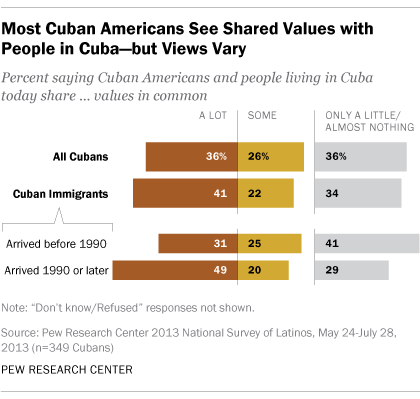 These demographic changes are impacting Cuban Americans’ views of Cuba. For example, among more recent immigrant arrivals, 49% say Cuban Americans and people living in Cuba share “a lot” of values in common, according to a new analysis of a 2013 Pew Research Center survey of Hispanics. By contrast, Cuban immigrants who arrived before 1990 hold a different view: 41% say there is “only a little” or “almost nothing” in common between Cuban Americans and people living in Cuba. (The sample size of those born in the U.S. is too small to provide reliable estimates.)

In addition, political party affiliation among Cubans registered voters has changed. Democrats have made inroads with the community, with younger Cubans leaning increasingly Democratic compared with their elders.

Shifting political party affiliation may have—or already have had—implications for the Latino vote in Florida. The state is home to two-thirds (68%) of the nation’s Cuban population, but also growing populations of Puerto Ricans and other Latino groups. For example, in 2012, 49% of Florida Cuban voters supported Barack Obama and 47% supported Republican Mitt Romney, according to the Florida exit poll. And while more Latino registered voters are Republicans than Democrats in Miami-Dade County—home to 46% of the nation’s Cuban American population—the opposite has been true statewide since 2008.

On views of U.S. relations with Cuba, a growing share of Cuban Americans in South Florida has said they oppose the U.S. embargo of Cuba. For example, a Florida International University survey of Cuban American adults in Miami-Dade county conducted earlier this year found that 52% opposed continuing the embargo, up from just 13% who said the same in 1991. (The poll also found that 48% favor keeping the embargo.) Opposition to the embargo was highest, at 58%, among Cuban immigrants who arrived in 1995 or later. As a result, Cuban American views of the U.S. embargo now mirror those of all Americans—more than a decade of polls by Gallup, through 2009, have found that about half of Americans have backed ending the embargo. A new Washington Post poll conducted after Obama’s announcement found 68% of Americans favored restoring trade with Cuba, up 11 points since 2009.

The FIU poll also found that 68% of Cubans in Miami favored re-establishing diplomatic relations with Cuba, with 80% of recent Cuban immigrant arrivals saying this. By comparison, 47% of Cuban immigrants who arrived before 1965 said the same. Among all Americans, 64% say they favor establishing diplomatic relations with Cuba, according to the Washington Post survey.

A new poll of Cuban Americans nationwide conducted by Bendixen & Amandi International for the Miami Herald, El Nuevo Herald and the Tampa Bay Times finds similar patterns by age and by immigration wave. It also finds that Cuban Americans are divided over the president’s announcement about Cuba, with 48% disagreeing with the decision to begin normalizing relations with Cuba and 44% agreeing with it.