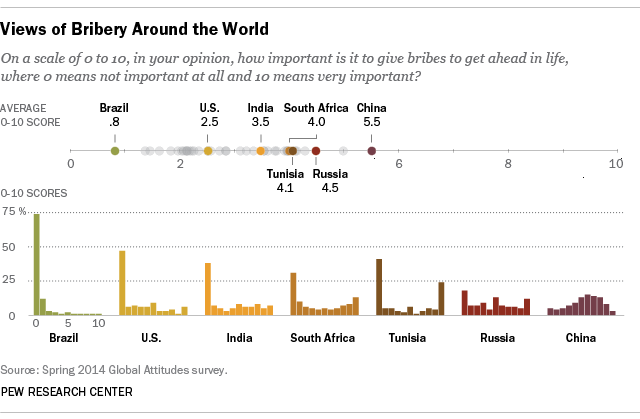 Whether it’s to cover up a scandal or score a business contract, acts of bribery are common throughout the world.

We recently asked people in 44 countries how important certain attributes are for getting ahead in life (with 0 meaning “not important at all” and 10 meaning “very important”). While “giving bribes” ranks at the bottom compared with other factors (“having a good education” tops the list), several countries stand out for their scores when it comes to greasing the palm.

In China, bribery is a recurring issue, so much so that Communist Party officials focused their 2014 plenum on anti-corruption efforts, among other rule-of-law topics. One of the most popular acts of bribery in China is gift-giving to secure government contracts, according to a 2012 World Bank survey of the Chinese business sector.

To gain more insights, we looked at the distributions of people’s responses on bribery on the 0-to-10 scale within each country’s population.

By contrast, people in Tunisia are more polarized on their views of bribery. While the average score is 4.1, more people choose either 0 or 10 than any other rating in between (41% choose 0, 24% choose 10). It’s worth noting, though, that a higher share of Tunisians choose 10 than people in any other country surveyed.