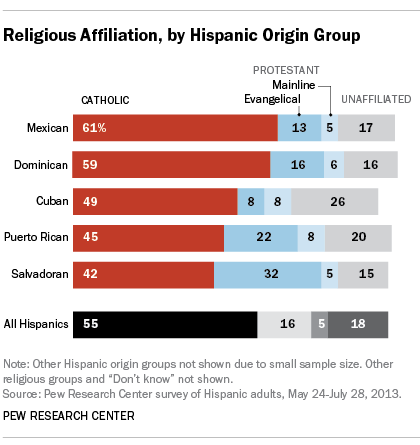 About six-in-ten Mexicans (61%) and Dominicans (59%) identify as Catholic, compared with about 49% of Cubans, 45% of Puerto Ricans and 42% of Salvadorans. Some one-third of Salvadorans are evangelical Protestants.

The differences between Hispanic origin groups fade when it comes to religious switching—the percentage of those who have left their childhood religion.  About one-third of Mexicans (30%), Puerto Ricans (34%), Cubans (33%), Salvadorans (32%) and Dominicans (34%) said they have switched from their childhood religion. About 5% of Hispanics, regardless of origin group, identify as mainline Protestant.