Same-sex marriage is now legal in Washington, D.C., and 17 states (and Arkansas will join them, if a lower-court judge’s ruling last week is upheld). Now the federal government’s task is to produce an accurate count of same-sex married couples.

Acknowledging a “very serious problem” of flawed same-sex marriage data, the U.S. Census Bureau is testing new marriage and relationship questions on its surveys in hopes of producing more accurate numbers in the next few years. According to a presentation earlier this month, the bureau found problems with the data “much worse” than the agency expected.

There is intense interest in the numbers and characteristics of same-sex married couples, as a growing number of states have legalized same-sex marriage and the federal government—reacting to a Supreme Court ruling last year—has expanded the rights of those couples. The numbers are important to know as a measure of how society is changing, to gauge the well-being of same-sex married-couple families and to help government agencies assess the need for various types of programs. For example, marital status can affect eligibility for some programs such as welfare and food stamps.

Some states that allow same-sex marriage collect their own data about the number of such unions, but the Census Bureau is the nation’s major source of numbers about both counts and characteristics of same-sex married couples. So far, it’s found the task challenging.

The Census Bureau doesn’t ask a direct question about same-sex marriage. Instead, it produces estimates of same-sex couples based mainly on respondents’ answers to questions about their sex and about how other people in a household are related to the householder (the person who fills out the census form). The current relationship question has more than a dozen answer categories, including “husband/wife,” as well as “unmarried partner,” an option added in 1990. The bureau then matches this information with the spouse or partner’s answers to the sex question to determine whether they are a same-sex or opposite-sex couple.

After the bureau released its first count of same-sex married-couple households three years ago, using data from the 2010 census, it acknowledged that the numbers were inflated and thus less than ideal to rely upon.

The new research also confirmed that the problem is much less frequent among same-sex unmarried couples, compared with married ones, in both the 2010 census and American Community Survey.

An unpublished bureau paper describing the results of the overcount research by Daphne Lofquist and Jamie Lewis, both bureau demographers and statisticians, called the inflated estimates of same-sex married couples in the American Community Survey a “very serious problem” and “much worse than we expected.” The paper also reported on results of its tests of reworded relationship questions on census surveys that ask directly about same-sex relationships, which the bureau hopes will provide a check against mismarks in the sex question. In the relationship question, they experimented with replacing “husband/wife” and “unmarried partner” with four new options: “Opposite-sex husband/wife/spouse,” “opposite-sex unmarried partner,” “same-sex husband/wife/spouse” and “same-sex unmarried partner.” 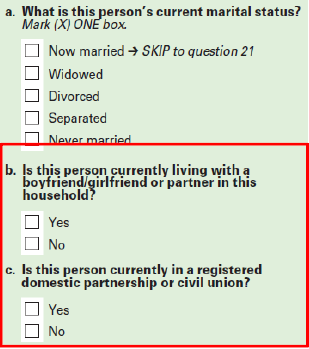 The bureau also is testing an expanded question about marital status. Now, people can choose “now married,” “widowed,” “divorced,” “separated,” or “never married.” The agency is considering adding questions about whether someone is “living with a boyfriend/girlfriend or partner,” or is “currently in a registered domestic partnership or civil union.”

However, the new questions did not eliminate the basic problem of mismatches between answers to the sex question and the relationship question among the same-sex married couples who were counted—about 56% in the American Housing Survey, which the bureau conducts for the Department of Housing and Urban Development. The results were “not encouraging,” the paper said, and indicate that opposite-sex couples are mistakenly marking the sex or relationship categories.

Bureau officials are continuing their research, and seeking advice from statistics officials in three other countries—Canada, New Zealand and the United Kingdom—that have experience in counting same-sex married couples. “It is difficult to know at this point exactly why we are seeing this result,” their paper said.

The bureau paper did report good results when analysts used a list of first names, categorized by sex, to verify the accuracy of the sex boxes people checked on survey forms. That method was what the bureau used to produce its lower revised 2010 census numbers for same-sex married couples.

Bureau officials plan to apply this name-check method in a limited way to 2013 American Community Survey data, which will be released in the fall, but only for married couples who did not fill in their sexes. (Census officials have changed people’s reported sex in the past; for example, in the 1990 census, if two people of the same sex reported being married, the bureau changed the sex of one of them because same-sex marriage was not legal at the time.)

The bureau also reported some positive results from its question experiments. Relatively few people complained about the new wording. The reworded questions did not dampen survey response rates, and responses to the relationship question were consistent with answers to the marital-status question.

Another factor that could influence the count of same-sex couples is whether they are willing to identify as such on a government questionnaire. The Census Bureau has worked with gay and lesbian advocacy groups to assure their constituencies that census information is confidential. Rising public acceptance of homosexuality and gay marriage also may play a role in influencing people’s decisions on what to say on their census forms. On the other hand, Census Bureau research also indicates some same-sex couples may describe themselves as married even though they are not, especially if they live in states that do not allow same-sex marriage.

The bureau hopes to implement a revised relationship question in its Current Population Survey in 2015, on the American Community Survey in 2019 and on the 2020 Census. The changes would require approval from the Office of Management and Budget.