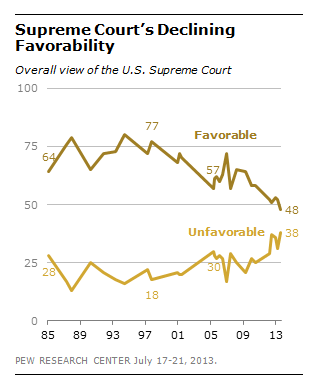 The Supreme Court began its new term today after a year in which it rendered far-reaching decisions on same-sex marriage and the Voting Rights Act. The previous term was one that left the high court with the lowest favorability ratings registered in nearly three decades of Pew Research Center polling.

In our most recent survey in July, 48% of Americans expressed a favorable view of the court while 38% regarded it unfavorably, the first time the positive number had edged below the 50% mark. Prior to the decisions handed down in June, a March survey found 52% viewed the court favorably while 31 % had an unfavorable opinion. As recently as 2007, nearly three-quarters (72%) of Americans had viewed the court positively. 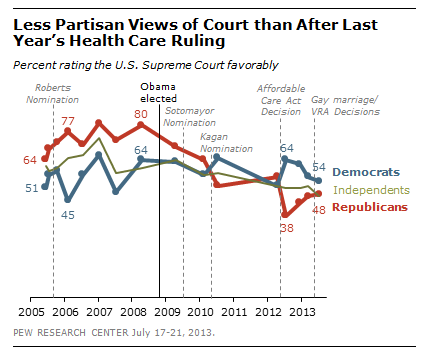 While the court’s favorability declined this year, partisan differences in opinions about it narrowed. Overall, 54% of Democrats in the July survey had a favorable view of the court as did 48% of Republicans, with 47% of independents sharing that view. In a July 2012 survey, after the court upheld the new health care law, the number of Republicans holding a favorable view of the court dropped to 38% compared to 56% who had a positive view in April. After the health care decision, the number of Democrats expressing a favorable view increased 12 points, from 52% to 64%.

The July survey found the public had mixed opinions about the ideology of the court. About four-in-ten (42%) considered the justices middle-of-the-road, while 26% said the court was liberal and 23% said it was conservative.

Opinion of the court among blacks plummeted after the June decisions, which included the closely-watched voting rights case. In March, 61% of blacks regarded the court favorably, a number that dropped to 44% in July. This was among the lowest favorable ratings for the Court among blacks in polling dating to 1985.

The court will return to the issue of campaign finance when it hears arguments on Tuesday in a case that challenges limits on political contributions to candidates. One of the last major campaign finance rulings by the court was its Citizens United decision in 2010 in which it held the government could not keep corporations or unions from spending money to support or denounce individual candidates.

A January 2012 survey found that, among those voters who were aware of the Citizens United decision, 65% said the ruling allowing independent expenditures had had a negative effect on the that year’s campaign compared to 16% who said the effect was positive.

It will hear a case challenging President Obama’s ability to bypass the Senate by making recess appointments, an highly partisan issue. There are two abortion cases on the docket, one involving a Massachusetts law restricting protests near reproductive health care facilities and the other on whether states can limit the use of abortion-inducing drugs. The court will also hear an affirmative action case involving a Michigan voter initiative that banned the use of racial preferences in admissions to state public universities.