A Pew Research Center survey in early May found that 41% of adults reported having a gun in their household: 27% said they personally owned a gun, and 14% said the gun or guns in their home were owned by someone else. 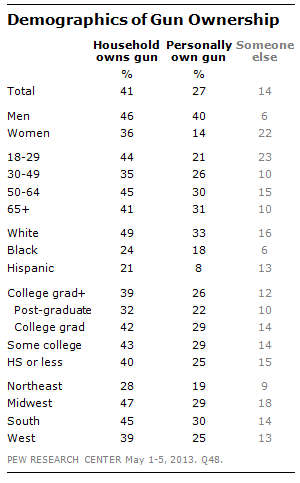 There is a substantial gender gap when it comes to gun ownership: men are almost three times as likely as women (40% vs. 14%) to personally own a gun. However, women are more likely than men (by 22% to 6%) to live with someone else who owns a gun. Overall, 46% of men live in a gun-owning household compared with 36% of women.

A third of whites own a gun, which is much greater than the rates of gun ownership among blacks (18%) and Hispanics (8%).

Gun ownership also differs substantially by region. Higher percentages in the Midwest (29%) and South (30%) say they own a gun. It’s less common in the Northeast (19%) and the West (25%).

Why Own a Gun? Protection Is Now Top Reason