In a difficult advertising environment for the magazine industry overall, newly-released numbers from the Association of Magazine Media (MPA) show the nation’s news magazines being hit particularly hard. 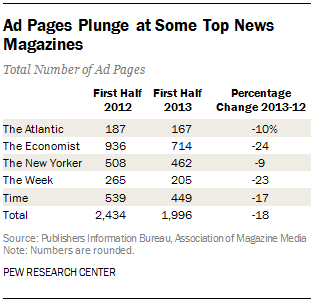 Total consumer magazine ad pages dropped 4.9% compared with the first half of 2012, according to MPA data for the first six months of 2013, released July 9. But the drop in ad pages for five major news magazines—Time, The Economist, The Atlantic, The Week and The New Yorker—was far steeper, a combined 18% in the first half of 2013 compared with the same period a year earlier. In one indicator of the difficulties facing news magazines, Newsweek—which saw ad pages decline by 60% from 2002 to 2012—discontinued its print edition at the end of 2012. (Read more on the status of Newsweek here).

Ad pages are considered a more reliable indicator of the financial health of a magazine than ad dollars because the dollar figures are based on rate card pricing that often does not reflect what an advertiser really pays.

The steep decline in magazine ad pages began as the recession struck. From 2008 through 2012, ad pages were down an average of 32% in the magazine industry overall and 27% among the news magazines, not including Newsweek. Numbers for the first half of 2013 suggest more hard times for the news magazines.

In the new figures, the Economist took the biggest tumble among news magazines in the first half of 2013, suffering a 24% drop in ad pages. The Week was close behind with a 23% drop in ad pages. Declines at Time and The Atlantic, while less severe, still reached double digits, at 17% and 10% respectively. Only The New Yorker managed to keep its ad page losses to single digits, with a drop of 9%.

While these numbers highlight a difficult print advertising climate, they don’t tell the whole story. MPA President Mary Berner says magazines are increasingly generating digital revenue. Initial industry monitoring of iPad ad units (the rough equivalent of print ad pages) for some magazine versions found that sales increased about 25% in the first half of 2013. Berner called those gains “encouraging” and added that later this year, about 100 magazines will be reporting some iPad ad unit results. In addition, some news magazines, most notably The Economist and The Atlantic, have begun diversifying revenue streams with such initiatives as events, conferences and creation of niche content. 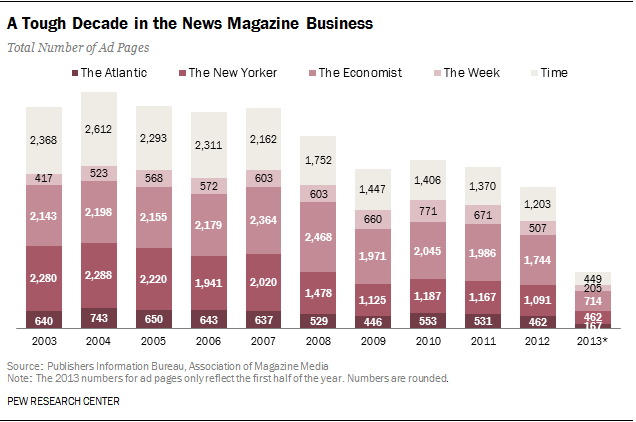 Correction: This post has been updated to reflect the fact that the magazine industry is monitoring the sale of iPad ad units rather than actual digital ad revenue.