A more recent discussion of our methodology for estimating the unauthorized immigrant population is available here. 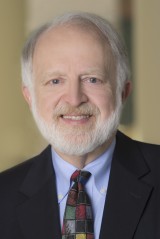 As a broad new immigration proposal crafted by a bipartisan group of senators has taken shape — with some of the most sweeping changes in a quarter-century — one statistic has been at center stage: the estimate that there are currently 11.1 million immigrants living illegally in the U.S. This is the group for whom proposed legislation would provide a path to citizenship for most.

How Pew Research calculates this number is the product of decades of work by Jeffrey S. Passel, a senior demographer, along with former colleagues at the U.S. Census Bureau and the Urban Institute. Passel has written numerous studies on the demography of immigration and on immigration issues. We talked to him about the research techniques used to derive the unauthorized immigrant population estimate and what we know about the unauthorized population living in the U.S. in the context of the current immigration debate.

What were the challenges in developing the estimate of unauthorized immigrants?

I’ve been working on this problem since roughly 1979. So, it’s not a new one. When we started, there really wasn’t very good information at all. The numbers available were speculative, with a very broad range. People were talking about maybe 6 million, maybe 12 million. I was working at the Census Bureau and it was important to get some sound, empirical information on this population. We needed the numbers for a lot of different purposes at the time. The challenge was finding data sources that included unauthorized immigrants. We weren’t sure they were showing up in the census and our surveys but as we looked into the issue, it became apparent that our standard data sources did include unauthorized immigrants. That discovery led us to a variation of the methodology we’re still using.

Walk us through the steps of how you make the estimate now. 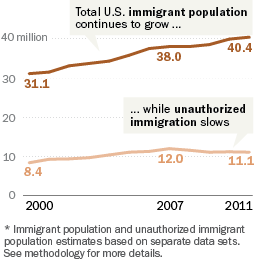 The methods have been refined and tinkered with as we’ve learned more and as we’ve gotten more and better data. A census or a national survey gives us a measure of how many immigrants (legal and unauthorized combined) are living in the United States. We then use a variety of data sources, mainly from the government, to estimate how many immigrants are living in the country legally.

The data we have on legal immigrants is a pretty solid set of numbers. Each year, the government admits two groups of legal immigrants. We admit people with so-called green cards for permanent residence. We get a count of those people and we know what countries they’re from, how old they are and a lot of other demographic characteristics. Those numbers now come from the Department of Homeland Security; before that, they came from the old INS, the Immigration and Naturalization Service. The other group of people we admit are refugees and we get these counts from the Office of Refugee Resettlement which is part of the Department of Health and Human Services.

What we do with those counts is that develop a population estimate with standard demographic techniques that account for deaths, departures and new arrivals each year. We’ve built up that estimate with data going back to 1980.

Talk about the next step in analyzing the unauthorized immigrant population once you’ve done that initial calculation you described.

There have been several studies done by demographers looking at coverage. We draw on data from Census Bureau studies of the under-count. We use information from a couple of surveys focused on Mexicans in the United States that asked them whether they participated in the census or not. And, perhaps our most useful set of data comes from surveys and censuses done in Mexico. Mexicans account for almost 60% of the unauthorized immigrants in the United States so we feel if we can get a good handle on how well they’re counted, we can generalize to other groups of people. Mexico has its own censuses, they have a number of large-scale surveys of Mexicans in the country, they have good historical data. Essentially, almost all of the Mexicans in the world are either in Mexico or the United States, so by looking at the number of the two countries combined, we can make some inferences on how good the data is in the U.S. and place some limits on how many Mexican immigrants might be missed in U.S. data sources.

We end up making upward adjustments to our estimates for under-count that fall in the range of 10% to 15%.

There are others who also make estimates such as these. Is there something that Pew Research does that others don’t?

What I do here is an extension of work that was developed when I was at the Urban Institute and worked very closely with a researcher named Rebecca Clark to develop these methods. At the end of doing the estimates, they tell us that there are 11 million unauthorized immigrants who appear in the survey. What Rebecca and I did was to take it another step and ask which of the respondents in the Census Bureau’s Current Population Survey) are the ones most likely to be unauthorized immigrants.

The CPS says there are about 40 million immigrants in the country, and we have individual level data representing them. Our methods allow us to sort the immigrants in the survey to determine which are most likely to be unauthorized immigrants by looking at where they were born, when they came to the U.S., how old they are, how they are related to other people in their households, what kinds of jobs they have, what kinds of income and whether they are getting government benefits, among other factors.

From what we know is being proposed in the Senate about a path to citizenship, do we have an idea of how many of the 11.1 million would be eligible?

If the cutoff date for being in this country is Dec. 31, 2011, then based on our latest published estimated for March 2011, all 11 million would be eligible to apply. We don’t know how many will apply and certainly not all will qualify because there are other requirements beyond just having been in the country.

What we can tell from our data that, to a degree is not widely appreciated, the unauthorized immigrant population is made up of young working families. The majority of unauthorized immigrant adults are here with family members — spouses and children. Our estimates are that unauthorized immigrants have between 4.5 million and 5 million children under 18 who are U.S. citizens because they were born here. Those children are affected by this proposed legislation because their parents have the potential of being able to remain here legally and not be subject to deportation.

In addition, the unauthorized families include roughly three-quarters of a million adults who are either immigrants here legally or U.S. citizens who are family members of these unauthorized immigrants. Some may be spouses, some of them are children who are older than 18. So that means that the total number of people who might be affected by the proposals is much larger, probably between 16 million and 17 million people. This demographic dynamic is not well-known or widely-appreciated. It’s often a big surprise to people.

Does the research we have indicate anything about how many unauthorized immigrants might take advantage of a path to legal status.

We have some data from the legalization programs tied to the Immigration Reform and Control Act of 1986 in the late 1980s. DHS has tracked these immigrants through the naturalization system and put out data that tells us how many have become U.S. citizens. And, ultimately, after about 20 years, around 40% of the people who gained legal status under IRCA became U.S. citizens. This was a group that was overwhelmingly Mexican. Mexican immigrants as a group have one of the lowest rates of naturalization among all of the legal immigrants — around 35% to 40% of Mexicans who are eligible to become U.S. citizens have done so. The rates have gone up substantially in the last 15 years, from less than 20% in the mid-1990s. Even though it’s up to 35% to 40% for Mexican legal immigrants, their rates are still much lower than the overall rate, which is over 60%. We really don’t know what’s going to happen with these new people; it’s a rather lengthy process to go through if it’s enacted. (See “The Path Not Taken: Two-thirds of Legal Mexican Immigrants are not Citizens,” Feb. 4, 2013).

How long have most of the unauthorized immigrants been in the U.S.?

The dynamics of unauthorized migration changed a lot over the last decade. In 2000, inflows were probably the highest they’ve ever been. Between 1990 and mid-2000s, the unauthorized population grew by an average of a half-million a year, meaning that the annual in-flows exceeded a half-million significantly. The peak was right around 2000. After 2007, with the onset of the recession, the number of new unauthorized immigrants coming plummeted and, for a couple of years, the numbers leaving the U.S. may have gone up too. (See “Net Migration from Mexico Falls to Zero — and Perhaps Less,” April 23, 2012). When we look at the unauthorized immigrant population today, there are a lot of people who came more than 10-15 years ago, and not a lot from the last five years. Two-thirds have been here more than 10 years.