Fox News host Glenn Beck’s Aug. 28 rally — “Restoring Honor” — on the National Mall as well as his recent criticisms of President Obama have focused strongly on religion, and specifically Christianity. On an Aug. 24 broadcast, for example, Beck characterized Obama’s religious beliefs as “liberation theology,” which he called a “perversion of the gospel of Jesus Christ as most Christians know it.” But Beck has also acknowledged that many U.S. Christians may question whether his own denomination — the Church of Jesus Christ of Latter-Day Saints, or Mormons — is a Christian group. In an interview with Chris Wallace on “Fox News Sunday,” Beck said, “[L]ook, I’m Mormon, and most Christians don’t recognize me as a Christian….” 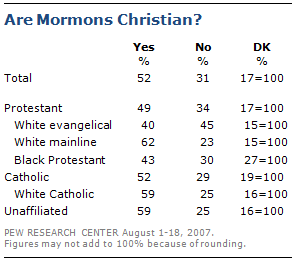 It would be incorrect to state that “most” Christians do not view Mormonism as a Christian religion. A 2007 survey by the Pew Research Center reported that a majority of Catholics (52%) say that Mormons are Christian; 29% say they are not. Among all Protestants, more say Mormonism is a Christian religion than say it is not by a 49%-to-34% margin. This includes 62% of white mainline Protestants who say Mormons are Christians.

Of the major Christian groups, white evangelical Protestants are the most likely to say Mormonism is not a Christian religion: 45% say Mormons are not Christians, while 40% say they are Christians.

While many Christians see Mormonism as a Christian religion, most Christians do not see their faith having much in common with Mormonism. Among all non-Mormon Americans who express a religious preference (most of whom are Christians themselves), fully 62% say that Mormonism and their own religion are “very different.” This opinion is held by 67% of white evangelical Protestants, 61% of white non-Hispanic Catholics and 56% of white mainline Protestants.

For more details about public attitudes toward Mormons, see these reports and commentaries from the 2007 survey: