While most Americans give positive ratings for how well the K-12 public schools teach reading, writing and mathematics, public assessments of STEM education for U.S. students in grades K-12 are middling. A large majority of Americans say such education is no better than average compared with other developed nations. Views of higher education in science, technology, engineering and math are a bit more positive, but there, too, only a minority of the public considers U.S. STEM education to be at least above average compared with other industrialized nations. 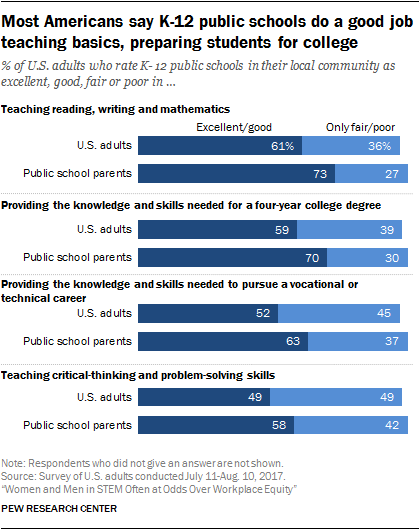 A majority of Americans say problems for K-12 STEM education can be attributed to limited parental involvement as well as failings in student work ethic and diminished interest in learning. But, at the same time, many adults believe such problems are the result of teaching methods and curriculum emphasis on meeting state standards.

People with children in public schools generally give positive ratings of K-12 public education in their local community, as do Americans overall. Some seven-in-ten parents say local K-12 public schools do an excellent or good job teaching reading, writing and math (73%) and preparing students for college (70%). Smaller majorities of parents say local schools do an excellent or good job preparing students for technical careers (63%) and teaching critical-thinking and problem-solving skills (58%).

Fewer than half of the public consider STEM education in the U.S. to be at least above average when compared with other developed nations 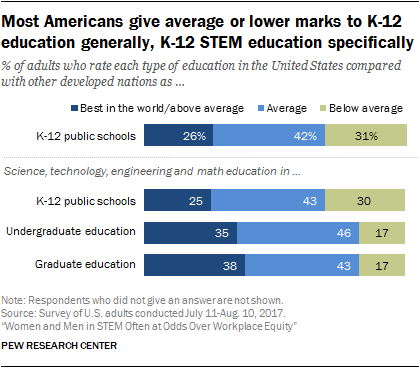 These relatively low ratings of STEM education for primary and secondary students are broadly in keeping with a 2015 Pew Research Center survey, which used slightly different wording. 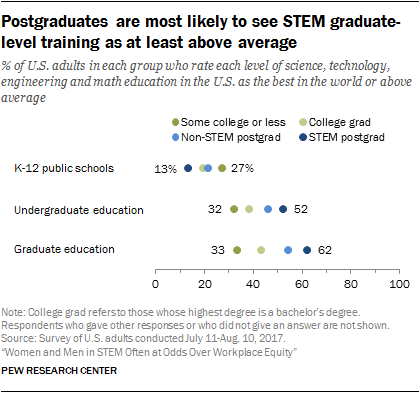 Americans spread the blame widely when it comes to problems with STEM education in K-12 public schools, with many seeing problems that originate from parents and students as well as teachers and school curricula.

In all, 55% of Americans see emphasis on prepping students for standardized state tests as a big problem, while some 53% fault teachers for not emphasizing the practical uses of these subjects. 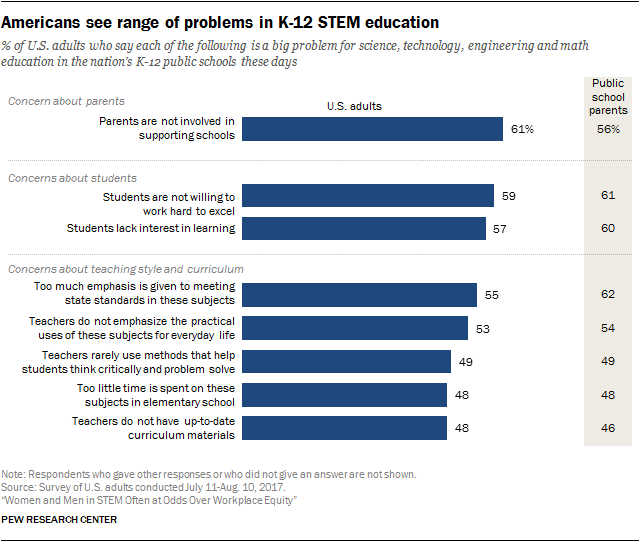 Roughly half of the public says a big problem for STEM education comes from teachers rarely using methods that help students think critically and problem solve (49%), spending too little time on these subjects in elementary school (48%) or not having up-to-date curriculum materials (48%).38 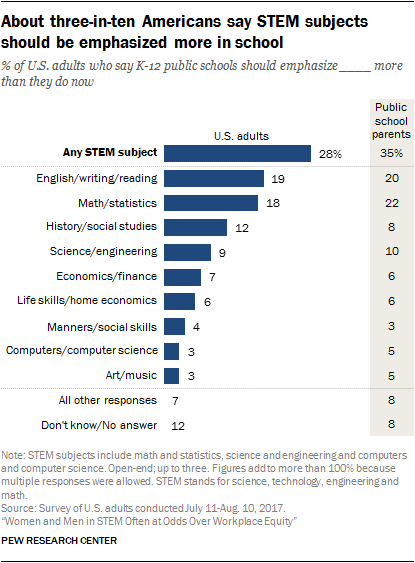 Those who have a postgraduate degree in a STEM field tend to hold similar views about the problems facing K-12 STEM education. But, this group is especially likely to attribute flaws in such education to an underuse of teaching methods that promote critical thinking and problem solving (68% of those with a postgraduate-level STEM degree say this).

When asked in an open-ended format which subject schools should emphasize more today, 28% of adults named a STEM subject. Specifically, 18% mentioned math or statistics, 9% mentioned science or engineering, and 3% mentioned computers or computer science.

Other subjects mentioned include English (19%) and history or social studies (12%).

Parents with children in public schools are modestly more likely than all U.S. adults to name a STEM subject as needing more emphasis (35% vs. 28%, respectively).

People with a postgraduate degree in a STEM field are particularly likely to volunteer that K-12 public schools should emphasize a STEM subject more than they do now – 42% say this, compared with 25% of those with some college or less education.

Next: 6. Many Americans say they liked math and science in school, thought about a STEM career
← Prev Page
Page1Page2Page3Page4Page5You are reading page6Page7Page8Page9Page10
Next Page →

Women and Men in STEM Often at Odds Over Workplace Equity 1. Diversity in the STEM workforce varies widely across jobs 2. Most Americans believe STEM jobs pay better, but few see them as offering more flexibility for family time 3. Women in STEM see more gender disparities at work, especially those in computer jobs, majority-male workplaces 4. Blacks in STEM jobs are especially concerned about diversity and discrimination in the workplace
5. Most Americans evaluate STEM education as middling compared with other developed nations
6. Many Americans say they liked math and science in school, thought about a STEM career Acknowledgments Methodology Appendix: Detailed tables and charts

7 facts about the STEM workforce