Most of the analysis in this report is based on telephone interviews conducted May 25 to June 29, 2016, among a national sample of 5,006 adults, 18 years of age or older, living in all 50 U.S. states and the District of Columbia (1,253 respondents were interviewed on a landline telephone, and 3,753 were interviewed on a cellphone, including 2,301 who had no landline telephone). The survey was conducted by interviewers at Princeton Data Source under the direction of Princeton Survey Research Associates International (PSRAI). Interviews were conducted in English and Spanish. For detailed information about our survey methodology, see https://www.pewresearch.org/methodology/u-s-survey-research/

A combination of landline and cell phone random digit dial (RDD) samples was used; both samples were provided by Survey Sampling International. Respondents in the landline sample were selected by randomly asking for the youngest adult male or female who was home at the time. Interviews in the cell sample were conducted with the person who answered the phone, if that person was an adult 18 years of age or older.

The combined landline and cell phone samples were weighted using an iterative technique that matches gender, age, education, race, Hispanic origin and nativity, and region to parameters from the Census Bureau’s 2014 American Community Survey and population density to parameters from the 2010 decennial census. The sample also was weighted to match current patterns of telephone status (landline only, cell phone only, or both landline and cell phone), based on extrapolations from the July-December 2015 National Health Interview Survey. The weighting procedure also accounts for the fact that respondents with both landline and cell phones have a greater probability of being included in the combined sample and adjusts for household size among respondents with a landline phone.

A second telephone survey was conducted Sept. 1 to 4, 2016, as part of the PSRAI September 2016 Week 1 omnibus. This survey was conducted among a nationally representative sample of 1,004 adults ages 18 or older living in the continental United States (503 respondents were interviewed on a landline telephone, and 501 were interviewed on a cellphone, including 294 who had no landline telephone). Interviews were conducted in English and Spanish. The margin of sampling error for the weighted data is ± 3.8 percentage points.

Coding of industries and occupations

Questions 20a and 20b in the main survey asked employed respondents what industry/field they work in and what kind of work they do (see topline for exact question wording and filters). These open-ended responses were coded using the net categories in the latest U.S. Census Bureau codes for industry and occupation, as reported by IPUMS.

Coding was conducted by PSRAI. The industry and occupation categories mentioned in the report are not exhaustive; only those with the largest shares of respondents are used in the analysis.

This section describes the data and methods used to measure the workplace trends presented in Chapter 1 of the report. A key aspect is the analysis of employment and wage trends in occupations grouped by job skills and preparation. That analysis is based on the combination of job skills and preparation data from the U.S. Department of Labor’s Occupational Information Network (O*NET) and occupational employment and wage data from the Current Population Survey (CPS).30 The CPS is also the data source for most of the other measures of workplace trends, such as health and retirement benefits, hours worked, job tenure, and self-employment.

Occupational Information Network (O*NET): The O*NET database provides a variety of information related to the requirements of more than 950 occupations. Among other things, O*NET includes information on the specific skills required (mathematics, for example) by occupations, the more general abilities of workers in different occupations (such as stamina), the activities to be performed on the job (interacting with computers, etc.), and the job preparation required (a combination of education, experience and training.) A key piece of information is that each skill, ability or activity is rated on a scale of one to five measuring its importance to job performance, from not important to extremely important. Job preparation is also rated on a scale of one to five, from little or no preparation needed to extensive preparation needed. The ratings are based on ongoing surveys of a nationally representative sample of workers as well as occupation information generated by trained job analysts. This report used the most recent version of O*NET database available at the time (version 20.3, released April 2016). The ratings are mostly from within the past decade, reflecting the current level of importance of a skill to an occupation. Any change in these ratings over time is not observed in the current analysis. The occupations included in O*NET are classified according to a coding scheme that is consistent with the 2010 Standard Occupational Classification.

Current Population Survey (CPS): Conducted jointly by the U.S. Census Bureau and the Bureau of Labor Statistics, the CPS is a monthly survey of approximately 55,000 households and is the source of the nation’s official statistics on unemployment. In this report, 12 monthly CPS files in each year were combined to generate annual estimates of occupational employment in 1980, 1990, 2000, 2010 and 2015. Wages are estimated from the annual outgoing rotation group (ORG) files which consist of the sample of workers from whom wage information was collected. Additional analysis is based on the Annual Social and Economic Supplements (ASEC), conducted in March every year, and other relevant supplements to the CPS. Most of the CPS microdata files used in this report are the Integrated Public Use Microdata Series (IPUMS-CPS) provided by the University of Minnesota.31

This report focuses on the changing demand for three major families of job skills – social, analytical and physical. In general terms, social skills include interpersonal skills, written and spoken communications skills, and management or leadership skills. Analytical skills pertain to facility with computers and mathematics, critical thinking and the like. Physical skills describe the ability to work with machinery or equipment, manipulate tools, and to do physical or manual labor. 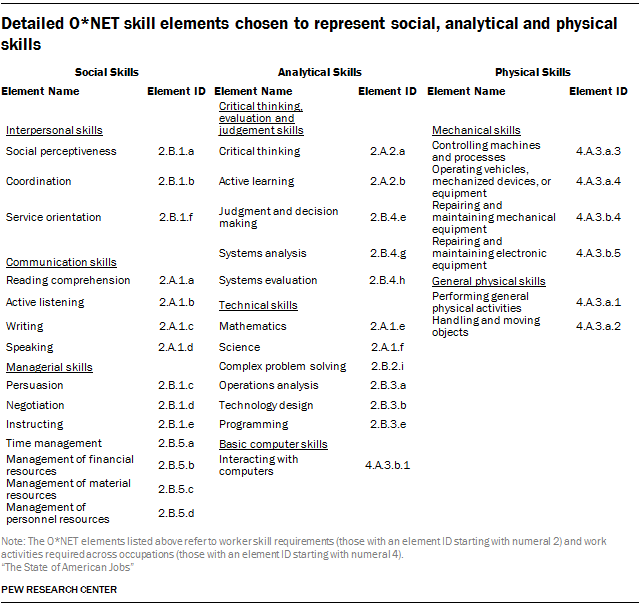 The job preparation rating for an occupation is as directly recorded in O*NET in job zones. For example, chief executives have a numerical rating of five on job preparation (“extensive preparation needed.”) This rating means that the occupation typically requires a graduate school level of education and extensive skill, knowledge and experience.

Because O*NET does not contain employment or wage information for occupations it is necessary to match the skills data to CPS data. Although both O*NET and the CPS use the 2010 standard occupational classification there is one key difference: O*NET lists more than 950 occupations coded at the eight-digit level, the finest detail possible, whereas the CPS lists fewer than 500 occupations coded at the four-digit level. In other words, an occupation listed in the CPS typically encompasses more than one occupation listed in O*NET. Thus, occupational data in O*NET must be aggregated to match up to the CPS data. This was done in three steps, as detailed below:

Step 3: Because occupational classifications are frequently revised, an additional step was necessary to match the job skills and preparation ratings to a harmonized occupation coding scheme that could be used to trace employment and wage trends going back in time. This was done using the scheme available in the IPUMS-CPS data (OCC2010) that provides a consistent, long-term classification of occupations based on the 2010 standard occupational classification. Because of some inconsistencies between the latest CPS occupational codes and the harmonized occupation coding in OCC2010, additional aggregation and recoding was needed to maximize the number of occupations with valid skill ratings. For example, job skills and preparation ratings for advertising and promotions managers, marketing and sales managers, and public relations managers – three distinct four-digit occupations in the current CPS – were averaged using employment weights to estimate the ratings for managers in marketing, advertising, and public relations – a single occupation in the time-consistent OCC2010 classification. The final dataset with job skills and preparation data from O*NET includes 431 occupations, of which employment and wage data from the CPS were available for 430 occupations.

Simple averages of the ratings for social, analytical and physical skills for the 431 occupations for which skills and preparation data could be tabulated are used to divide occupations into two groups, those with average to above average skill ratings and those with below average ratings.

With respect to job preparation, the average rating across all occupations in 2015 is estimated to be 2.88. Jobs requiring this average level of preparation typically call for an associate’s degree or a similar level of vocational training, plus some prior job experience and one or two years of either formal or informal on-the-job training (e.g., electricians). Occupations with a job preparation rating of 2.88 or higher are classified as requiring higher levels of job preparation.

Estimates of hourly wages encompass all workers from whom wage data were collected in the CPS, whether or not the workers were paid on an hourly basis. For workers who are not paid by the hour, the hourly wage is calculated as weekly earnings divided by the usual numbers of hours worked in a week. Wage estimates pertain to a worker’s main job. The CPS collects data on wages from outgoing rotation groups only, which represent one-quarter of the monthly sample. Self-employed workers are excluded from this sub-sample. Wages are adjusted for inflation with the Consumer Price Index Research Series (CPI-U-RS).

The State of American Jobs 1. Changes in the American workplace 2. How Americans assess the job situation today and prospects for the future 3. How Americans view their jobs 4. Skills and training needed to compete in today’s economy 5. The value of a college education Acknowledgments
Methodology
Survey methodologyAnalyses of secondary data