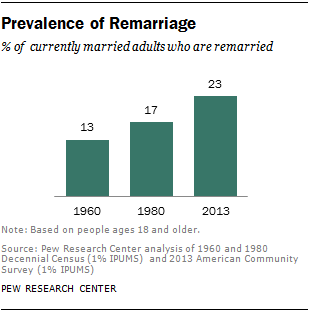 Remarriage has been on the rise for decades. Among all adults who are presently married, about one-fourth (23%) have been married before. This marks a dramatic increase from 1960, when only 13% of married adults had previously been married, and from 1980, when 17% had been. Among those married in the past 12 months, the share rises to 29%.

The trends in remarriage that are explored in this report have taken place against a backdrop of striking changes in the prevalence and stability of marriage itself. 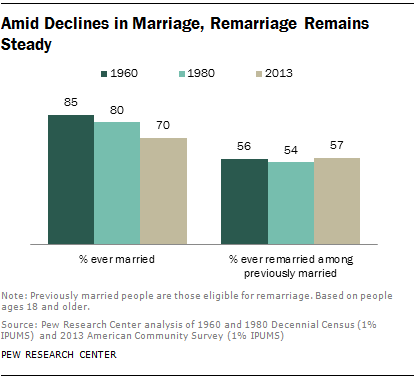 Overall, marriage has been on the decline in the U.S. for several decades.5 In 1960, 85% of adults had been married at some point in their lives. That share dropped to 80% in 1980 and to 70% in 2013. This so-called ‘retreat from marriage’ has been driven largely by delays in marriage, and by the rise in couples living together without first tying the knot.

Over the same time period, there has been a rise in the share of marriages ending in divorce or widowhood, due in part to the aging of the population.6 In 1960, 25% of ever-married adults had divorced or become widowed. By 2013 that share was 43%.

These dramatic changes in marriage and divorce ultimately led to an increase in the pool of adults who could potentially remarry. In 1960, 21% of all adults had previously been married; by 1980, the share stood at 26%; and in 2013, 30% of adults had been married previously. Among this group, the share who has remarried has been quite stable for the past 50 years, in contrast to the declining share of adults who have ever married. In 2013, 57% of previously married adults had remarried, compared with 56% in 1960.

Despite the overall stability in the likelihood to remarry, there are notable differences by age, gender, race and other factors in the share of previously married adults who marry again.

Next: Chapter 2: The Demographics of Remarriage
← Prev Page
Page1You are reading page2Page3Page4Page5Page6Page7
Next Page →

Four-in-Ten Couples are Saying “I Do,” Again
Chapter 1: Trends in Remarriage in the U.S.
Chapter 2: The Demographics of Remarriage Chapter 3: The Differing Demographic Profiles of First-Time Married, Remarried and Divorced Adults Chapter 4: Marriage and Remarriage Among Newlywed Couples Appendix A: Additional Table Appendix B: Methodology