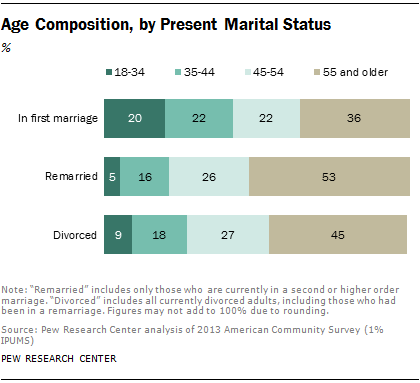 These age patterns may be contributing to differences by education, race and ethnicity across marital groups. 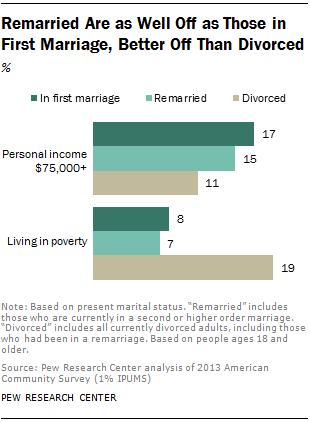 There are also stark differences across these groups in rates of homeownership. Divorced adults are much less likely than their married counterparts to own a home.17 Three-fourths of adults in their first marriage own their home, as do 79% of remarried adults. In contrast, just 58% of those who are currently divorced are homeowners.

Remarried adults are disproportionately white. While 79% of the remarried are white, this number is 69% among adults in their first marriage and 71% among the divorced. By the same token, adults in their first marriage are slightly more likely to be Hispanic (15%) than adults who are remarried (9%). Divorced adults include a relatively large share of blacks (14%), compared with each married group (8% among first-time marrieds, 9% among remarrieds). Asians, on the other hand, are particularly prevalent among adults married for the first time. Some 7% of this group is Asian, compared with 3% of remarried and divorced adults.

Next: Chapter 4: Marriage and Remarriage Among Newlywed Couples
← Prev Page
Page1Page2Page3You are reading page4Page5Page6Page7
Next Page →

Four-in-Ten Couples are Saying “I Do,” Again Chapter 1: Trends in Remarriage in the U.S. Chapter 2: The Demographics of Remarriage
Chapter 3: The Differing Demographic Profiles of First-Time Married, Remarried and Divorced Adults
Chapter 4: Marriage and Remarriage Among Newlywed Couples Appendix A: Additional Table Appendix B: Methodology