Young adults are not opposed to marriage, however. According to the new Pew Research survey, only 4% of never-married adults ages 25 to 34 say they don’t want to get married. A majority of them either want to marry (61%) or are not sure (34%). 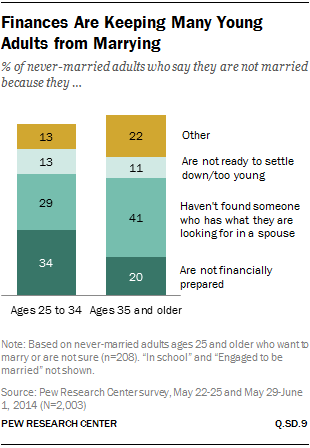 Compared with older adults who have never been married (those ages 35 and older), young adults are more likely to cite financial insecurity as the main reason they are not currently married (34% vs. 20%). An additional 29% of young never-married adults say that they haven’t found someone who has what they are looking for in a spouse. Only 13% say they are too young or are not ready to settle down. 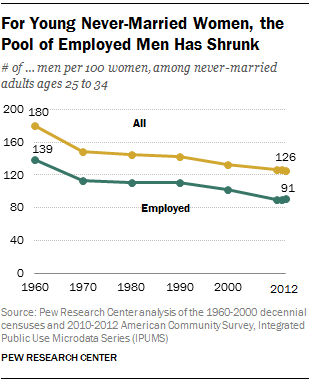 The ratio of employed men to all women among never-married young adults is much lower than the overall male-to-female ratio. It has also dropped over time – from 139 employed men per 100 women in 1960 to 91 in 2012.20 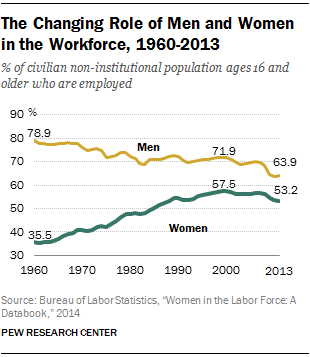 Meanwhile, young women are more likely than young men to graduate from college nowadays. Since the 1990s, women have outnumbered men in both college enrollment and college completion rates, reversing a trend that lasted through the 1960s and ’70s. By 2013, 37% of women ages 25 to 29 had at least a bachelor’s degree, compared with 30% of men in the same age range. 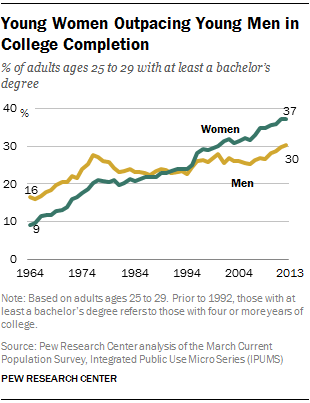 Women are also more likely to continue their education after college: 12% of women ages 25 to 34 in 2013 had a master’s, doctorate or professional degree, compared with 8% of their male counterparts.

The marriage market that young adults face today reflects changes in women’s educational attainment and employment status relative to men. People tend to marry people whose education level is similar to their own, and the degree of “educational assortative mating” has increased in the past few decades, especially among adults who have a college degree.

When men’s employment status is taken into account, the number of never-married young men per 100 women drops at every education level. The falloff is greatest among young men with a high school education or less. Within this educational cohort there are 174 men, but only 108 employed men, for every 100 women. 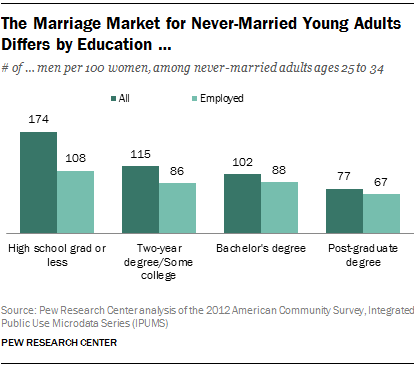 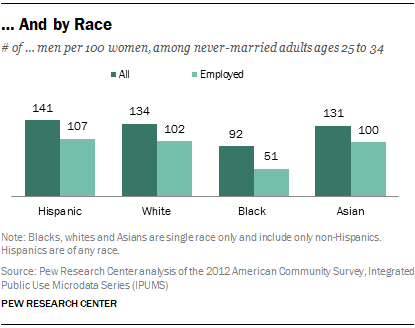 Another factor that relates to the marriage market is race or ethnicity. It is true that interracial and interethnic marriages are on the rise in the U.S., and the new Pew Research survey finds that among unmarried adults, a similar racial or ethnic background is viewed as a less important criterion for a potential spouse than finding someone with a steady job or someone with shared views about child rearing. Even so, 85% of new marriages still take place between adults whose racial or ethnic backgrounds are similar. 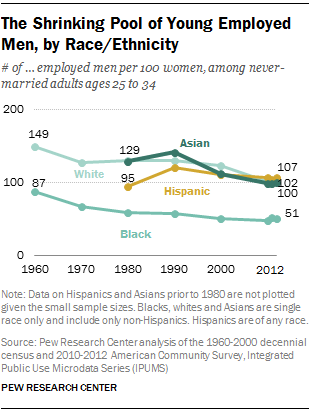 Next: Chapter 5: The Changing Demographics of Never-Married Americans
← Prev Page
Page1Page2Page3Page4You are reading page5Page6Page7
Next Page →