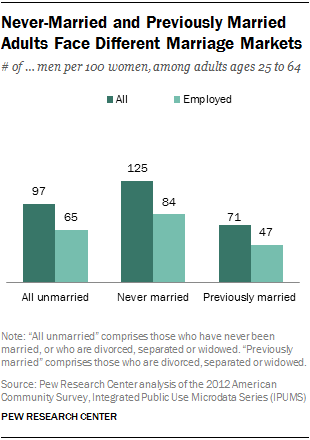 Economist Gary Becker argued many decades ago that marriage can be analyzed within an economic framework. Marriage is voluntary, and men and women compete when they try to find the best mate.14 Borrowing Becker’s concept, this chapter looks at the “supply” side of the marriage market and focuses on the sex ratio (number of males to number of females) among unmarried adults. In other words, how many eligible men and women are there, and how do they compare in terms of key demographic characteristics?

Both quantity and quality of available unmarried adults are likely to matter on the marriage market. Previous research suggests that the pool of economically attractive men is linked to marriage formation patterns.15 Taking that into consideration, this analysis also includes the ratio of employed unmarried men to all unmarried women.

Looking at the overall marriage market, which includes both never married and previously married adults (those who are divorced, separated or widowed), the sex ratio is fairly balanced.16 Among unmarried Americans ages 25 to 64, there are 97 unmarried men ages 25 to 64 for every 100 unmarried women in that age group.

Within this broader unmarried population, there are sharp differences between the pool of adults that has never been married and those who were previously married. Men outnumber women by a large margin among never-married adults (125 men for every 100 women), but men are outnumbered by women among previously married adults (71 men for every 100 women). This is mainly because women are more likely than men to be divorced or widowed. In 2012, 15% of women ages 25 to 64 were divorced, compared with 12% of men in the same age group. Some 3% of women and 1% of men in this age group were widowed.

The new Pew Research survey findings suggest that today’s unmarried women place a high premium on finding a spouse with a steady job: 78% of never-married women say this is very important, compared with 46% of men. And much of the research that has been done on marriage markets has focused on the ratio of employed men to women. When the employment status of unmarried men is taken into account, the number of men compared with women decreases dramatically. Among all unmarried adults, the ratio of employed men to all women goes down—for every 65 employed unmarried men, there are 100 unmarried women. Among those who have never been married, the ratio is 84 employed men per 100 women, and for those who have previously been married it is 47 employed men for every 100 women. 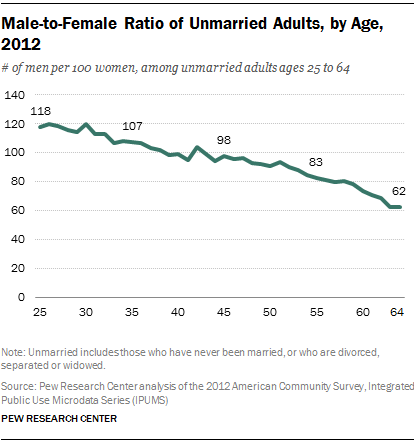 Ratios presented here illustrate how men and women on the marriage market compare only in terms of key demographic characteristics. The actual marriage market is much more complex than these ratios. As the Pew Research Center survey finds, only about half of never-married adults (53%) say they want to get married, and a much lower share of previously married adults (21%) say they would like to marry again. Moreover, 17% of unmarried adults ages 25 and older are currently living with a partner.17 In reality, the pool of eligible men and women on the marriage market could be much smaller than the one presented here.

In addition, individuals’ choices on the marriage market are not bound by demographics. Never-married adults are not necessarily restricting their choices to those who have never been married before. Young adults might marry someone who is not in their age group. Location also matters in the mate selection process, as people often search within the area where they live, and the sex ratio and job market can be quite different from one geographic area to another.