Rather than focusing on households headed by young adults, let’s examine the adjusted household incomes of all young adults. Following Bell, Burtless, Gornick, and Smeeding (2007), the most serious shift in living arrangements that might undermine the tabulations based on heads of households is that greater proportions of Millennials are living with mom and/or dad compared with earlier generations.18 Fewer Millennials are married, but that is largely offset by the fact that more Millennials have unmarried partners. 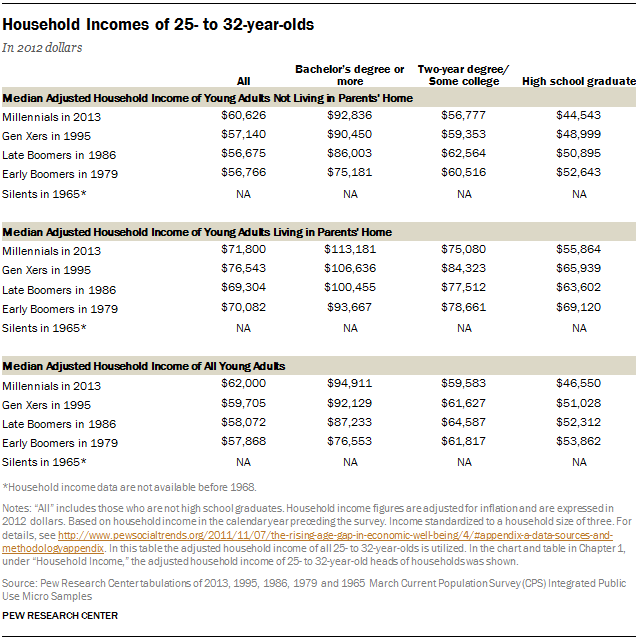 Rather than examining household incomes, the personal incomes of young adults can be examined. These are presented in the second panel of the table in Chapter 1, under “Household Income.” Personal incomes simply reflect the total income (including sources of income other than earnings) of the young adult. Personal incomes do not account for the income contributed by other members of the household. Nor do they account for any dependents the young adult may have. Conventional measures of economic well-being (for example, poverty) are household-based and recognize that economic gains can be realized from shared living arrangements (for example, two can rent an apartment cheaper than one) and that dependents may entail some economic costs.19

Next: References
← Prev Page
Page1Page2Page3Page4Page5You are reading page6Page7
Next Page →

The Rising Cost of Not Going to College Chapter 1: Education and Economic Outcomes Among the Young Chapter 2: Public Views on the Value of Education Appendix A: Additional Charts on the Labor Market Appendix B: Data Sources
Appendix C: Young Adult Living Arrangements and Household Incomes
References