A major factor explaining the relative economic well-being of cohabiters of different levels of educational attainment is the level of labor market participation and number of earners in a household. Most notably, college-educated cohabiters are more likely to work than college-educated married adults, but cohabiters without college degrees are less likely to work than married adults without college degrees. 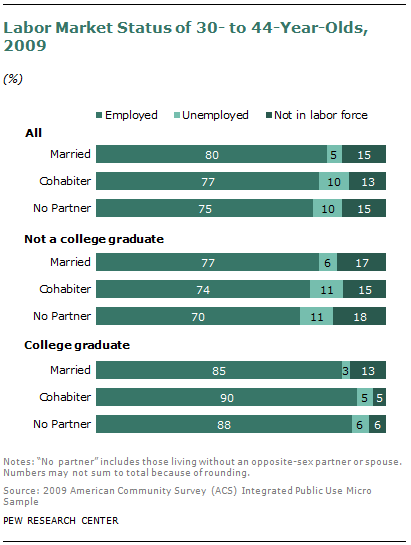 Research indicates that one quality that adults seek in a spouse or partner is a “good provider”–although that is valued more for men than women. In a recent Pew Research Center survey, 67% of respondents say that in order to be ready for marriage, it is very important for a man to be able to support a family financially; 33% say the same about a woman.

Adults with a high school education or less were more likely than those with a college education to say it is very important for a man (75% vs. 55%) or a woman (39% vs. 30%) to be able to support a family financially before marrying. 4

Other research has found that when young couples decide whether to marry, that choice is linked to economic circumstances, especially men’s employment, earnings and educational attainment. Among young couples without college degrees, many believe that marriage is a sign of an adequate level of economic achievement. (Smock et al., 2005)

Consistent with this, married adults overall tend to have greater success in the labor market—measured by employment and wages—than their unmarried counterparts. Cohabiters are more likely to have a job than are adults not living with a spouse or partner of the opposite sex.

Among the college-educated, married adults (85%) were slightly less likely to be employed than cohabiting adults (90%) or those without opposite-sex partners (88%). A notable 13% of married college-educated adults were not in the labor force, perhaps because of child-raising responsibilities.

Among adults without college degrees, 77% of married adults had jobs in 2009, compared with a slightly lower 74% of cohabiting adults and 70% of adults without a partner. All categories of adults—whether married, cohabiting or not living with an opposite-sex partner—had similar rates of not participating in the labor force. 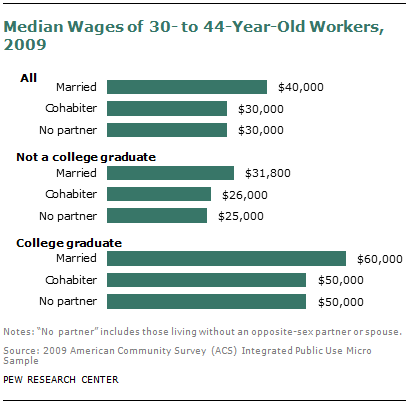 Wages are the most important source of household income for 30- to 44-year-olds and married adults have the edge by this measure. As shown, married workers tend to earn the most at each level of educational attainment. Overall, they earned a median $40,000 in 2009, compared with $30,000 for the unmarried. Among the college-educated, median wages were similar for cohabiters and adults living without opposite-sex partners. Among adults without college degrees, cohabiters had slightly higher median wages than adults living without opposite-sex partners.

The reason for the wage disparity between married and unmarried adults is the subject of a large body of research. In part, the higher pay of married people reflects the reality that adults want to marry others who are economically successful, and the economically successful are more likely to marry. But being married may also have causal impacts on earnings in that marriage may make people, particularly men, more productive (Nock, 2005).

As shown, among adults ages 30 to 44, the greater employment rate of college-educated cohabiters helps offset their lower earnings relative to the earnings of married adults. In the instance of cohabiters without college degrees, they are less likely to be employed, and when they are, they tend to be paid less than married adults without college degrees.

Complementing the levels of labor market participation of the individuals are the patterns of dual-earner relationships. 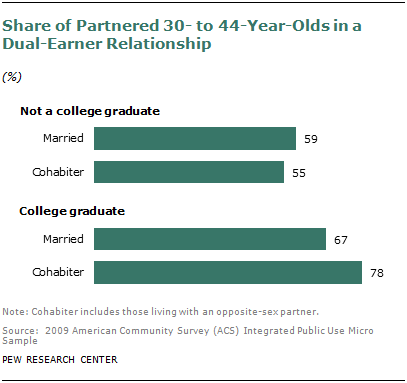 Among the college-educated, 78% of cohabiting adults in 2009 were in a relationship in which both partners were employed. Perhaps reflecting greater parental and family responsibilities, only 67% of college-educated married adults were in a two-earner marriage.

In some cases, this could indicate that one spouse has pulled back from the job market, perhaps to devote time to child care. This helps counter the wage advantage for married adults compared with cohabiters.

Next: IV. The Households and demographics of 30- to 44-Year-olds
← Prev Page
Page1Page2Page3You are reading page4Page5Page6Page7
Next Page →