The economic well-being of adults ages 30 to 44 is influenced not just by their own labor market characteristics and those of any partners, but also by the nature of their households.

The measure of economic well-being used in this analysis already takes account of differences in the size of the household, but the makeup of the household matters as well. The presence of children and other family members has important consequences for the amount of effort adults devote to the labor market and the number of earners in the household. 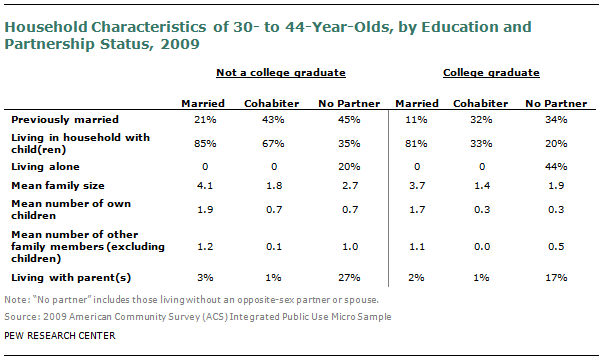 There are sharp differences by educational attainment, however, in the share of cohabiting couples with children in the household. Only a third of college-educated cohabiters live with at least one child, compared with two-thirds of less-educated cohabiting adults.

For example, among 30- to 44-year-old women who gave birth in the past year, fewer than one-in-ten of college-educated women was unmarried, according to data from the 2008 American Community Survey. The shares were notably higher—ranging from 21% to 34%—for women with some college education, a high school diploma or no high school diploma. Births to unmarried women include births to women who are cohabiting; they accounted for 2.2% of births to college-educated women ages 30 to 44 and 6% to 7% of births to women in that age group without college degrees (Dye, 2010). 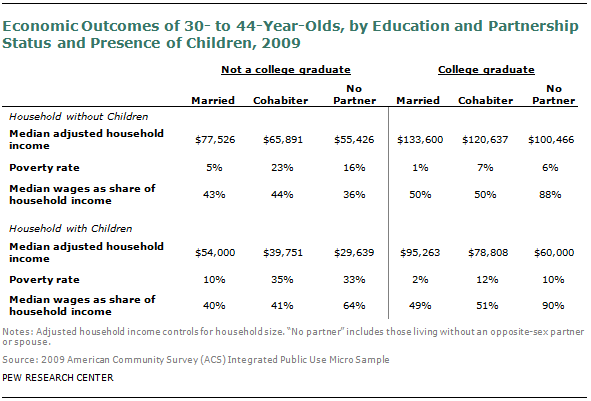 The presence of children detracts from economic well-being because children require time and care; they likely lead to a reduction in hours devoted to paid work on the part of the parent or the partner of the parent. They also increase household size, but the measure of median adjusted household income accounts for differences in household size.

Thus, a basic reason that cohabitation seems to economically benefit college-educated adults but yields much lower economic dividends for less-educated adults is due to household composition. Among the college-educated, cohabitation is much less likely to involve living with children, and, perhaps as a result, these cohabiters are likely to be members of dual-earner couples. Cohabitation among the less-educated two-thirds of the time involves parenthood on the part of at least one of the cohabiters, and children tend to reduce measured economic well-being.

Given that less-educated adults without a spouse or partner often reside with other adult family members, cohabitation offers less of a potential economic windfall to them. By moving in with a partner, they may have the benefit of that partner’s income. But by moving out of a household with other family members, they lose the economic resources those other family members contribute. Cohabitation does not necessarily produce net additional earners for the households of less educated adults as it does for college-educated adults without a spouse or partner.

Goodwin, P.Y., W.D. Mosher, and A. Chandra. 2010. “Marriage and Cohabitation in the United States: A Statistical Portrait Based on Cycle 6 (2002) of the National Survey of Family Growth.” February. Vital and Health Statistics, vol. 23, no. 28. Hyattsville, MD: National Center for Health Statistics.

Garner, Thesia, Javier Ruiz-Castillo, and Mercedes Sastre. 2003. “The Influence of Demographics and Household-Specific Price Indices on Consumption-Based Inequality and Welfare: A Comparison of Spain and the United States,” Southern Economic Journal, vol. 70, no. 1: 22-48.

Kenney, Catherine T. 2006. “The Power of the Purse: Allocative Systems and Inequality in Couple Households,” Gender and Society, vol. 20, no. 3, June.