Cohabitation has become increasingly commonplace among all U.S. adults, and research suggests that most women who marry for the first time cohabit first. However, there are notable differences by educational attainment: Cohabitation is more prevalent among the less educated and its rise in this group has been accompanied by a decline in marriage rates. This is not the case for college-educated adults, whose marriage rates have held steady as cohabitation has grown.

In 2009, there were 60.4 million U.S. adults ages 30 to 44, including about 4.2 million (7%) living with an unmarried partner of the opposite sex. 1 The majority (58%) were married and living with spouses. The remaining 35% did not live with an opposite-sex spouse or partner; a significant share of this group (42%) had previously been married. 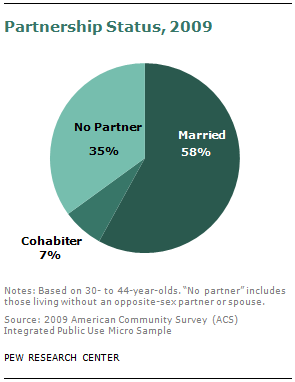 The rate of cohabitation has more than doubled in this age group over the past 15 years. The 7% of adults ages 30-44 who cohabited in 2010 compared with 3% who did so in 1995, according to data from the Current Population Survey. 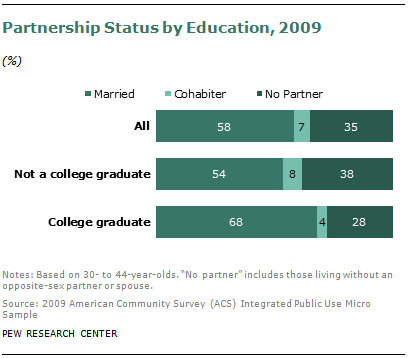 Cohabitation has doubled since 1995 among both college-educated 30- to 44-year-olds and those without a college degree (table on page 10). However, there is an important difference in partnership trends between these two populations.

Among less-educated adults, however, the share currently married declined as cohabitation (and living without a partner) has grown. In 2010, only 56% of adults without a college degree were married, according to the Current Population Survey, a decline from 63% in 1995. In 2010, 36% of the less educated were neither married nor cohabiting with an opposite-sex partner, an increase from 33% in 1995.

Fewer than one-in-ten adults currently lives with an unmarried opposite-sex partner, but a much greater share of adults report cohabiting at some point. Recent estimates from the 2006-2008 National Survey of Family Growth indicate that nearly 70% of women in their early 30s had ever cohabited (National Center for Marriage and Family Research, 2010). These days, the transition from courtship to marriage more often than not includes a spell of cohabitation. More than half (58%) of women aged 19-44 who marry for the first time had lived with their husbands before the wedding (Kennedy and Bumpass, 2008).

It is beyond the scope of this report to analyze by educational attainment the proportion of adults who ever have cohabited or the share who married after cohabiting, but other research suggests that there are important differences. As might be expected from current cohabitation rates, women without college degrees also are most likely to have cohabited at some point in their lives. Among women ages 19-44, 73% of those without a high school education have ever cohabited, compared with about half of women with some college (52%) or a college degree (47%) (National Center for Marriage and Family Research, 2010).

Survey findings by the Pew Research Center indicate that most, but not all, adults who cohabit view it as a step toward marriage. In a 2010 Pew Research Center survey, nearly two-thirds (64%) of respondents who ever have lived with an unmarried partner say they thought of it as a step toward marriage. Among those currently living with a partner, 53% say so, compared with 67% of those who cohabited sometime in the past 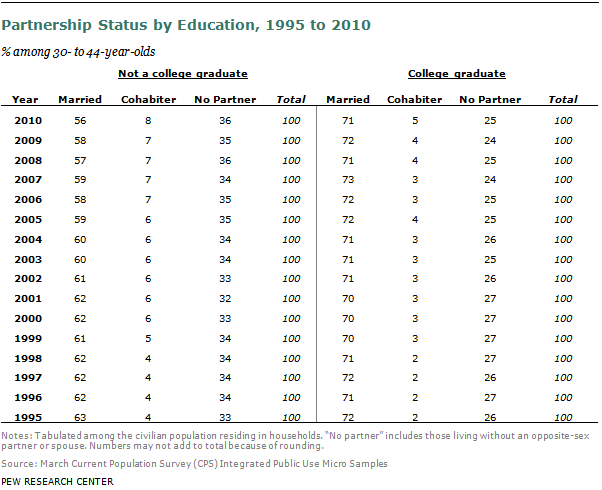 There are no differences by education level on whether cohabitation is viewed as a step toward marriage, but there are some differences by income level. The most affluent respondents (with household incomes of at least $75,000) are more likely than the least affluent (with household incomes of less than $30,000) to say they thought of cohabitation as a step toward marriage (69% to 59%).

Public opinion research indicates that Americans have become more accepting of unmarried couples than in the past but that a notable minority disapproves. 2 The same 2010 Pew Research Center Survey that interviewed current and past cohabiters also found that among the general public, 43% of adults believe the increase in unmarried couples living together is bad for society, while 9% believe it is good for society and 46% say it makes no difference.

Next: II. The Economics of Cohabitation
← Prev Page
Page1You are reading page2Page3Page4Page5Page6Page7
Next Page →