This section analyzes the economic well-being of 30- to 44-year-old adults, by partnership status and educational attainment, using measures of median household income and poverty rates to assess overall well-being. 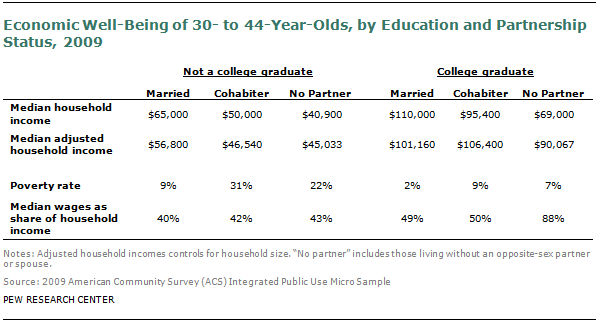 A recent Pew Research Center survey indicates that when unmarried partners decide to move in together, some base their decisions in part on financial considerations. The survey asked adults who ever lived with an unmarried partner whether household finances played a role in their decision to move in together. Overall, 32% say finances did play a role, and 66% say they did not. There are no notable differences between those with and without a college degree on this question.

As shown in the table above, unadjusted median household income is higher for married couples than for cohabiters or adults without partners, regardless of educational attainment. 3 Cohabiters also have notably higher household income than do adults who do not live with an opposite-sex partner.

These simple household income tabulations do not tell the full story of available economic resources, however, because they do not account for the size of the household. A person living alone can afford more on the same income than a married couple or a family of four. This analysis adjusts for household size and produces a standardized result scaled to a three-person household. The household size adjustment is not as simple as calculating the household income per household member, which would not allow for economies of scale or the notion that “two can live more cheaply than one.” Instead, the analysis uses the standard equivalence scale approach in order to compare households of different sizes on an equal basis. In measuring household well-being, the analysis assumes that a two-person household requires 1.41 times the income of a one-person household to be equally well-off (see the Appendix for further details).

Among adults without a college degree, however, marriage is associated with the highest economic status. Cohabiters are not much better off in adjusted household income terms ($46,540 in 2009) than those who do not live with opposite-sex partners ($45,033).

The adjusted household income figures suggest the amount of available economic resources, but the amount that each adult actually receives depends on how household members share those resources. There is evidence that married and cohabiting couples tend to use different money management systems, with married couples more likely to pool their money for joint use (Hamplova and Le Bourdais, 2009; Kenney, 2006).

Another measure of economic well-being is poverty rates. Among the college-educated, 9% of cohabiters lived in poverty in 2009, compared with 2% of married adults and 7% of adults without opposite-sex partners. A notable 31% of cohabiters without college degrees lived in poverty in 2009, a higher share not only than married adults (9%) but also well above the 22% rate for comparably educated adults without opposite-sex partners.

1. These 4.2 million people are members of unmarried-partner couples in households headed by unmarried partners. Cohabiting partnerships that do not include the household head cannot be identified in the 2009 American Community Survey. As discussed in the Appendix, cohabiting partnerships involving the household head account for about 80% of all cohabiters.]