The Center’s survey takes a multifaceted approach to understanding public trust in scientists.1 Respondents were asked whether scientists in each of six specialties can be counted on to act with competence, to present their recommendations or research findings accurately, and to care about the public’s best interests – or, in some cases, patients’. In addition, respondents were asked about potential sources of mistrust, including issues of transparency and accountability for mistakes or misconduct.

Together, their responses provide a rich and complex portrait of trust in scientists, suggesting that the public generally has more confidence in practitioners than researchers and that greater familiarity with these groups, as well as greater factual knowledge about science, correlates with higher levels of trust. But there is widespread skepticism of scientists when it comes to issues of transparency and accountability for mistakes. The survey also highlights concerns about misconduct, with black and Hispanic respondents more likely than whites to see it as a big problem.

Americans are often more trusting of dietitians and medical doctors than of nutrition and medical researchers, respectively 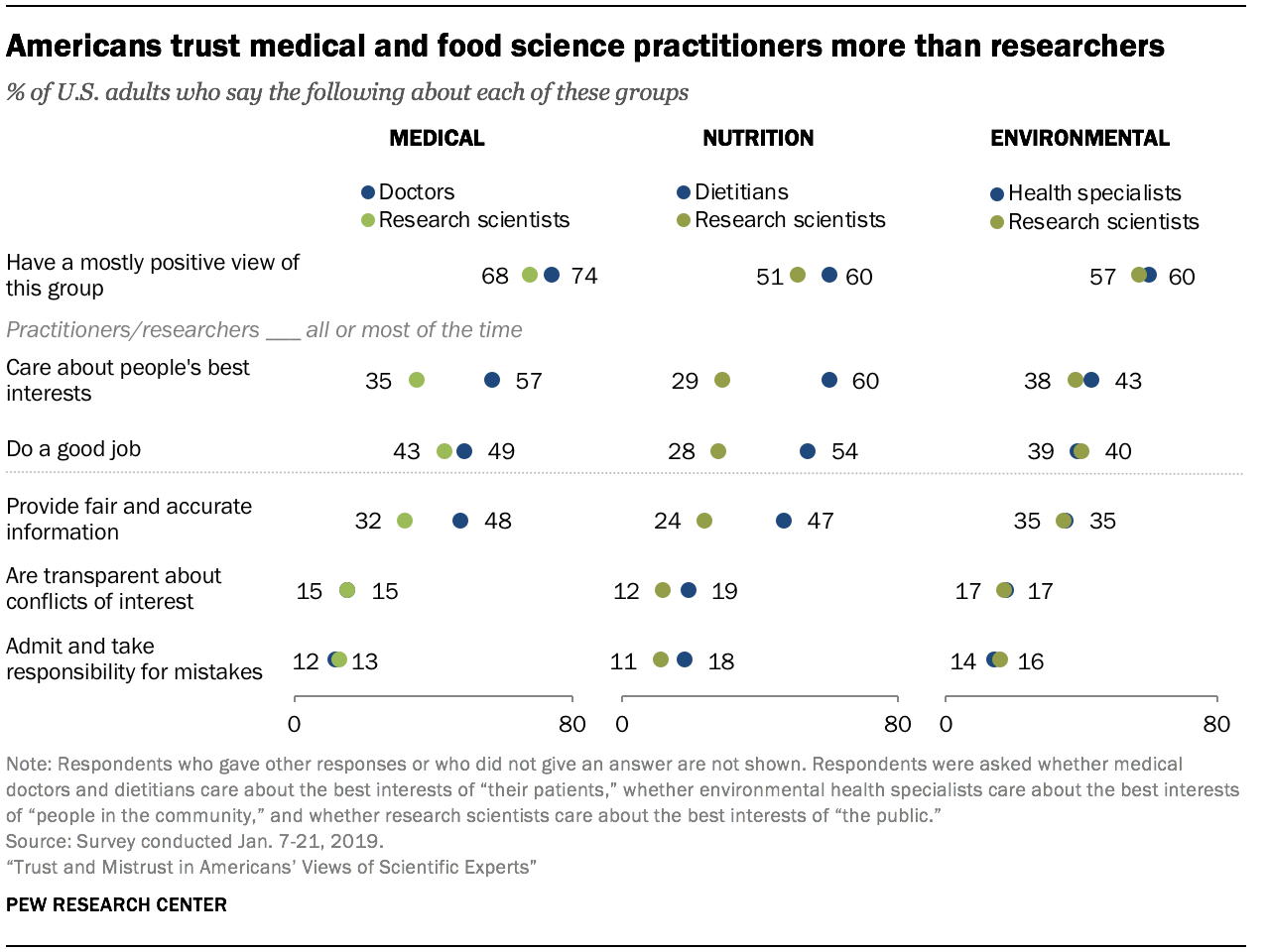 In addition, 47% say dietitians provide fair and accurate information about their recommendations all or most of the time, compared with 24% for nutrition scientists discussing their research. Six-in-ten Americans (60%) think dietitians care about the best interests of their patients all or most of the time, while about half as many (29%) believe that about nutrition researchers when it comes to concern for the public.

Similarly, the public tends to view medical doctors more positively than medical researchers when it comes to their concern for the public’s interests and providing trustworthy information. For example, 57% of Americans say doctors care about the best interests of their patients all or most of the time, compared with 35% for medical researchers. About half the public (48%) believes that medical doctors provide fair and accurate treatment information all or most of the time, compared with 32% who say this about medical researchers in discussing their findings.

Most say scientists routinely lack transparency and accountability, but views about misconduct vary 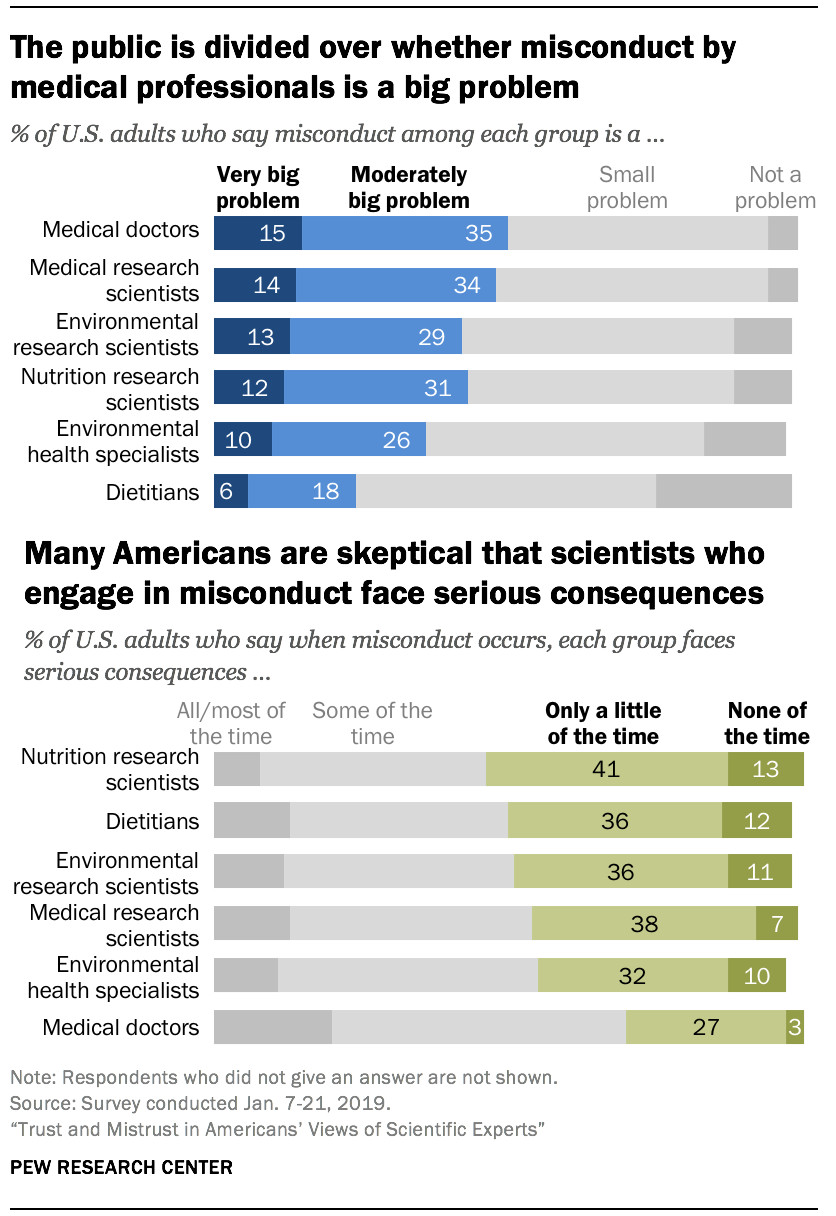 Integrity in research and practice is often considered foundational for public trust in science. The Center’s survey finds most Americans tend to be skeptical of both practitioners and researchers when it comes to potential sources of mistrust.

In addition, people with higher levels of factual knowledge about science tend to hold more positive and trusting views of scientists. (It is important to note that familiarity with scientists is not the same as factual science knowledge.)

These factors, however, have a more limited effect on public skepticism about how often scientists are transparent about potential conflicts of interest, admit to mistakes or are held accountable for misconduct.

Americans learn about scientists from a range of information sources 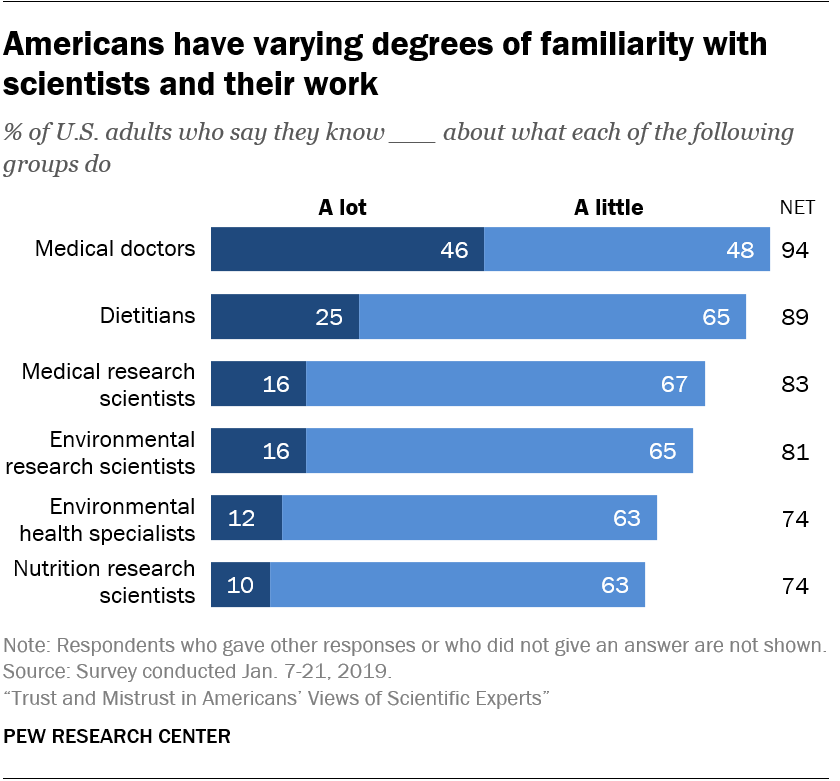 Familiarity with these specialties stems from a range of information sources. News reports are the most common source. Majorities of Americans say they know at least a little about each of these scientists because they have heard or read about their work in the news. Personal contact with these groups varies from 65% for medical doctors to 16% for nutrition research scientists. Other potential sources of information about scientists considered in the survey include school and work. 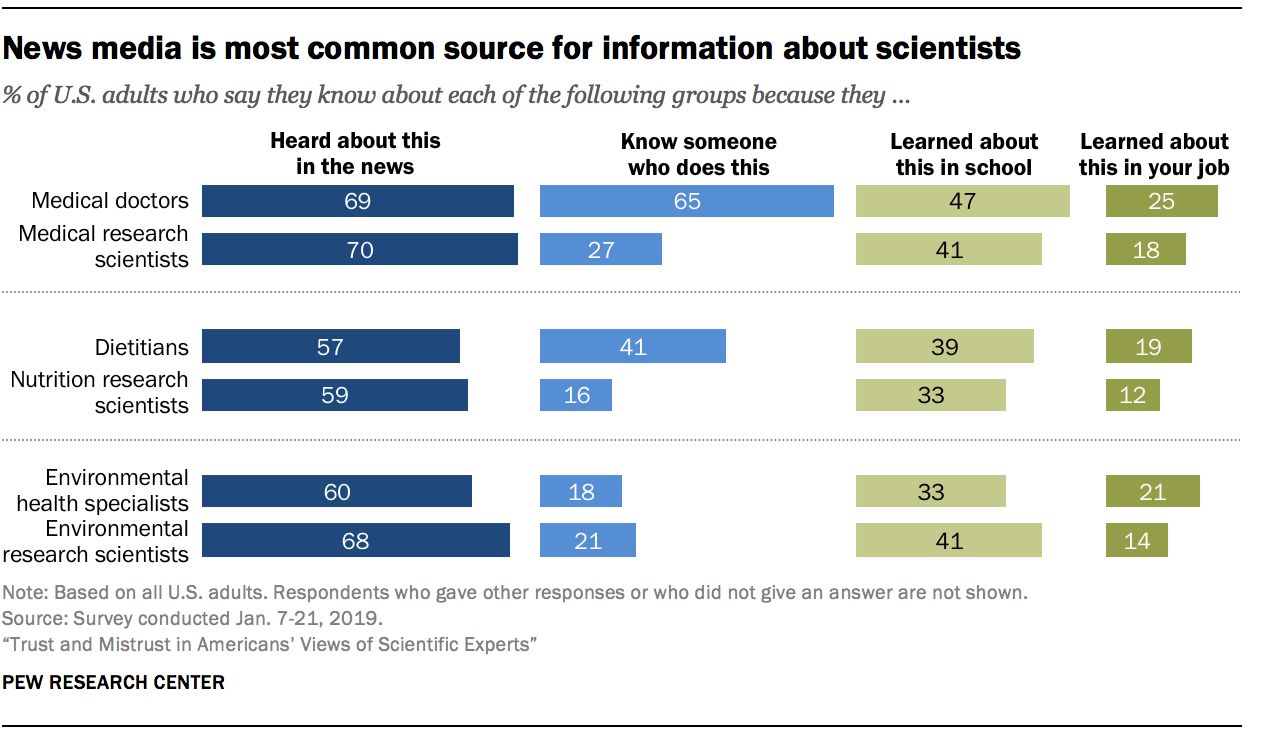 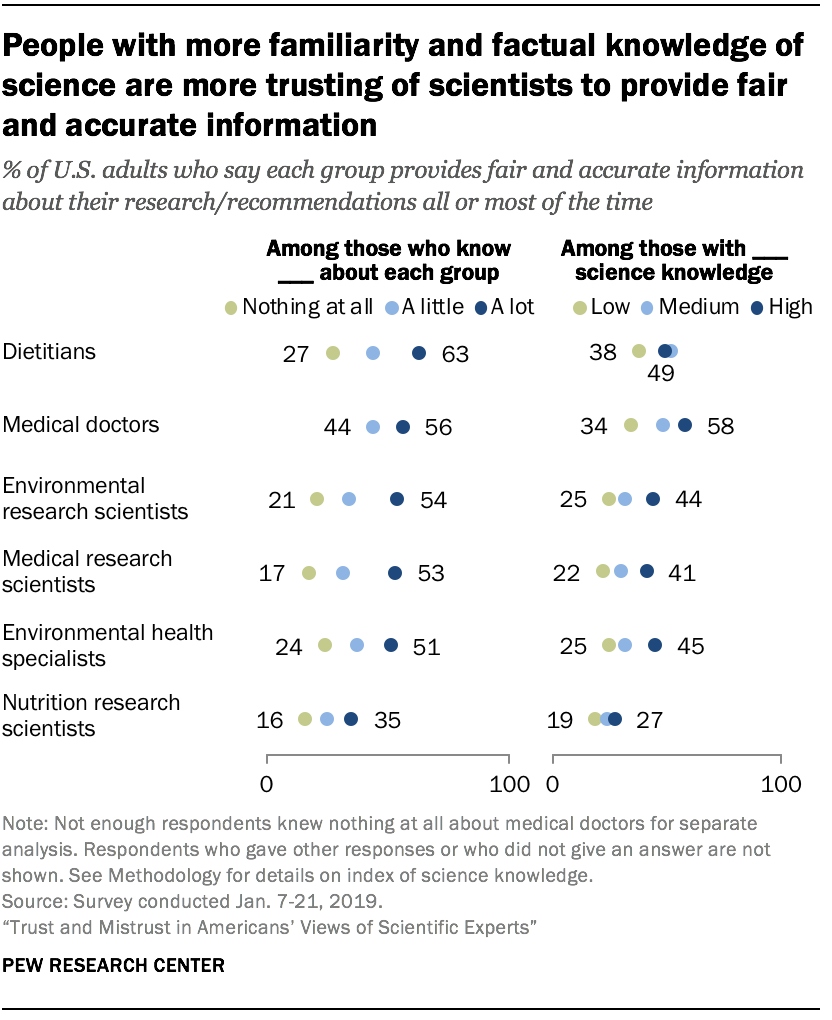 People who have higher levels of familiarity with scientists’ work are more confident that scientists can be counted on to do their job with competence, to show concern for the public and to provide accurate information. One example: 63% of those who know a lot about dietitians say they provide fair and accurate information all or most of the time, compared with 27% of those who know nothing about dietitians − a difference of 36 percentage points. 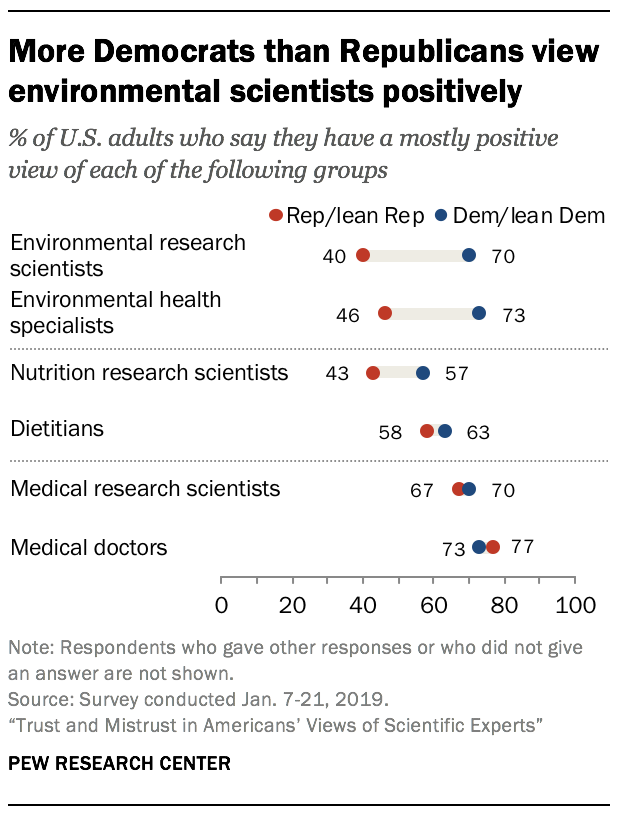 Democrats are also more inclined than Republicans to have overall positive views of nutrition research scientists, although the magnitude of difference is modest by comparison (57% vs. 43%, respectively).

There are no significant differences by political party in views of medical researchers, medical doctors or dietitians. 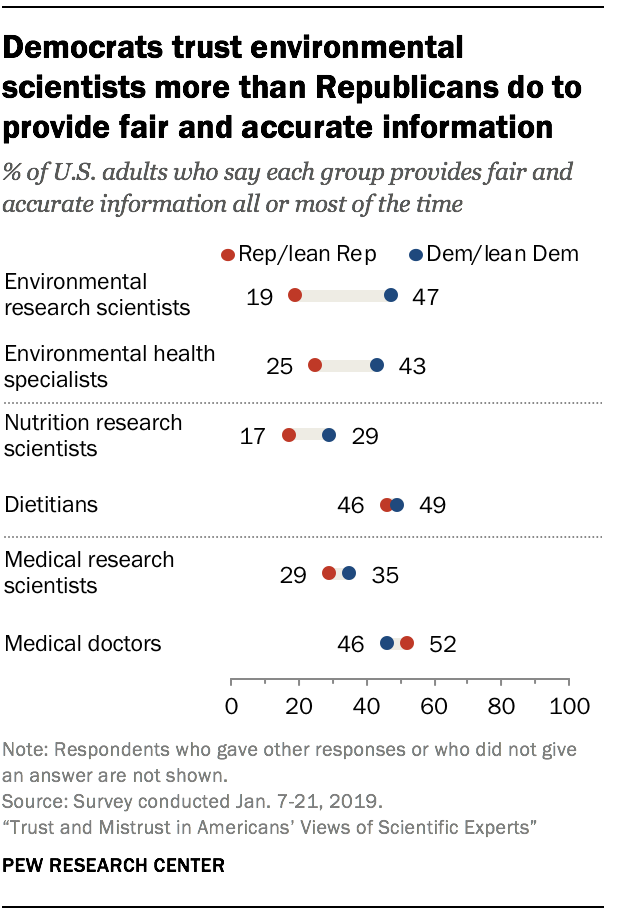 There are modest partisan differences when it comes to trust in nutrition research scientists, but both party groups have about the same levels of trust in medical doctors, medical researchers and dietitians.

And party groups tend to share skeptical views of scientists’ transparency, responsibility for mistakes and accountability for misconduct.

Black and Hispanic adults stand out as more likely than whites to see professional or research misconduct as a very or moderately big problem. 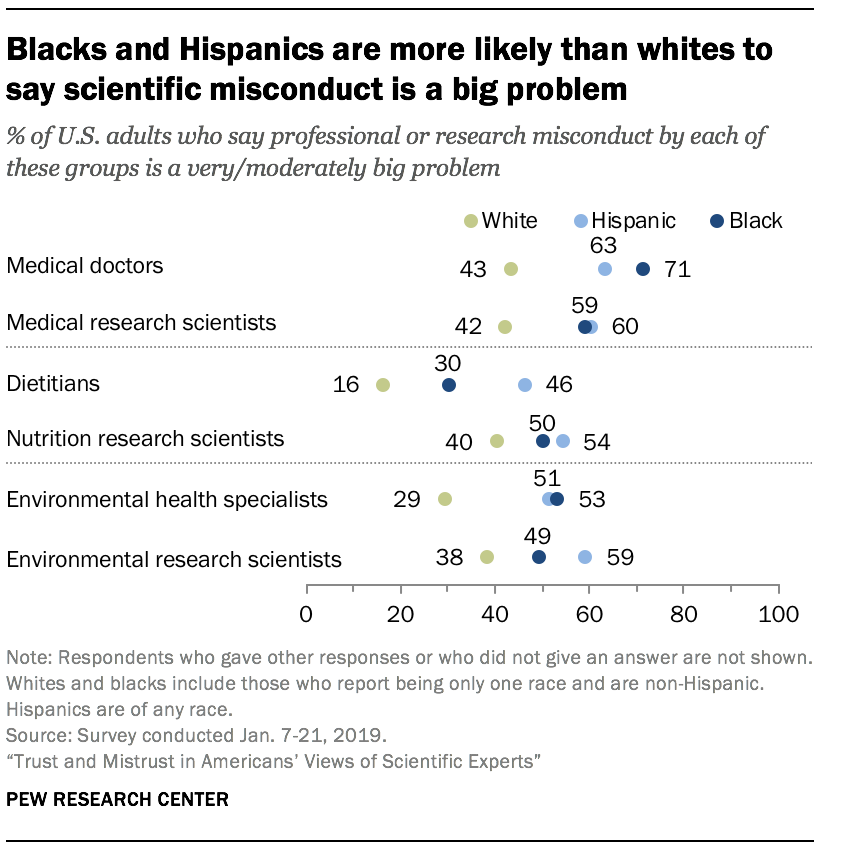 A large majority of black Americans (71%) say misconduct by medical doctors is a very/moderately big problem, compared with 43% of whites – a gap of 28 percentage points. Hispanics (63%) are also more likely than whites to describe doctors’ misconduct as a big problem. In addition, a larger percentage of blacks (59%) and Hispanics (60%) say misconduct by medical research scientists is a very big or moderately big problem, compared with 42% of whites.

These findings could be related to inequities in health care and outcomes, among other issues faced by black people and other nonwhite Americans in medical treatment and research. Examples include the “Tuskegee Study of Untreated Syphilis in the Negro Male”3 and the case of Henrietta Lacks, both of which involved individuals who were subject to research studies without their knowledge or consent.

Trust and Mistrust in Americans’ Views of Scientific Experts 1. Partisanship influences views on the role and value of scientific experts in policy debates
2. Americans often trust practitioners more than researchers but are skeptical about scientific integrity
Americans are often more trusting of dietitians and medical doctors than of nutrition and medical researchers, respectivelyMost say scientists routinely lack transparency and accountability, but views about misconduct varyPublic trust in scientists is linked with familiarity of their work and factual knowledge about sciencePartisan differences in overall views and trust in scientists occur primarily for environmental scientistsBlacks, Hispanics more likely than whites to consider scientific misconduct a big problem
3. Americans say open access to data and independent review inspire more trust in research findings 4. Americans generally view medical professionals favorably, but about half consider misconduct a big problem 5. Americans trust dietitians more than nutrition researchers but are skeptical of both groups’ transparency, accountability 6. A majority of Americans have positive views of environmental scientists, but trust in them varies by politics Acknowledgments Methodology