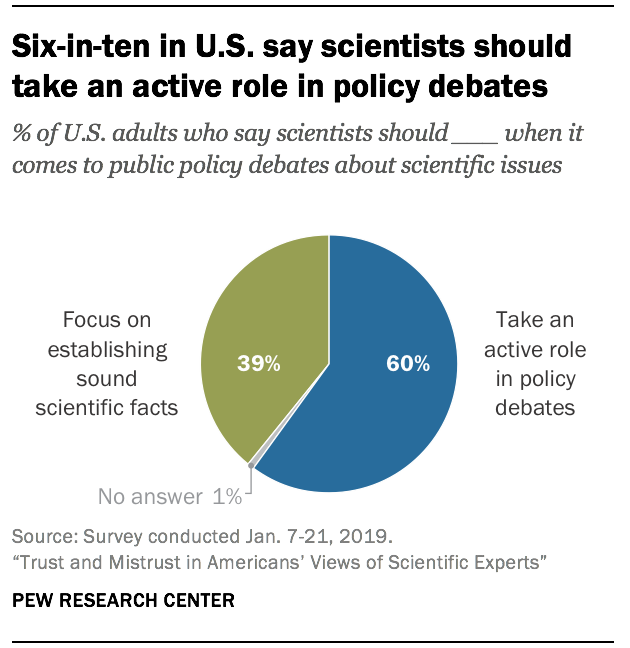 A majority of U.S. adults support the participation of scientific experts in policy debates, but Democrats are more likely than Republicans to think scientists should be involved and are more likely to value their decisions. Partisan divisions also arise in beliefs about the value of the scientific method and the likelihood of bias in scientists’ judgments. 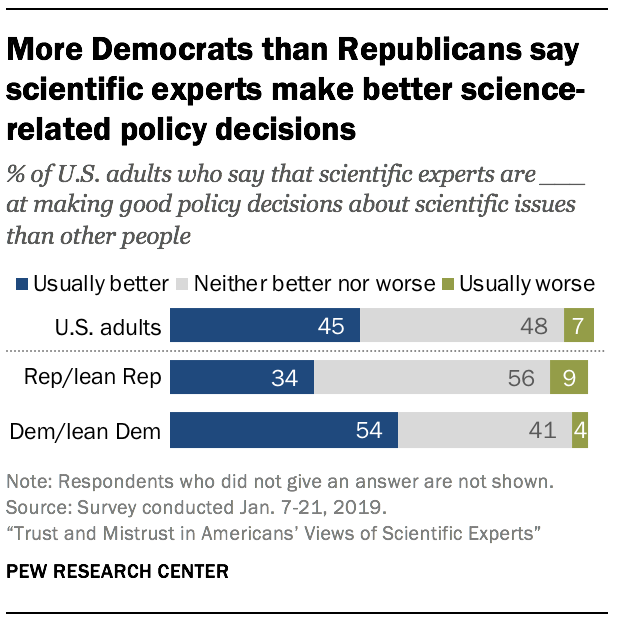 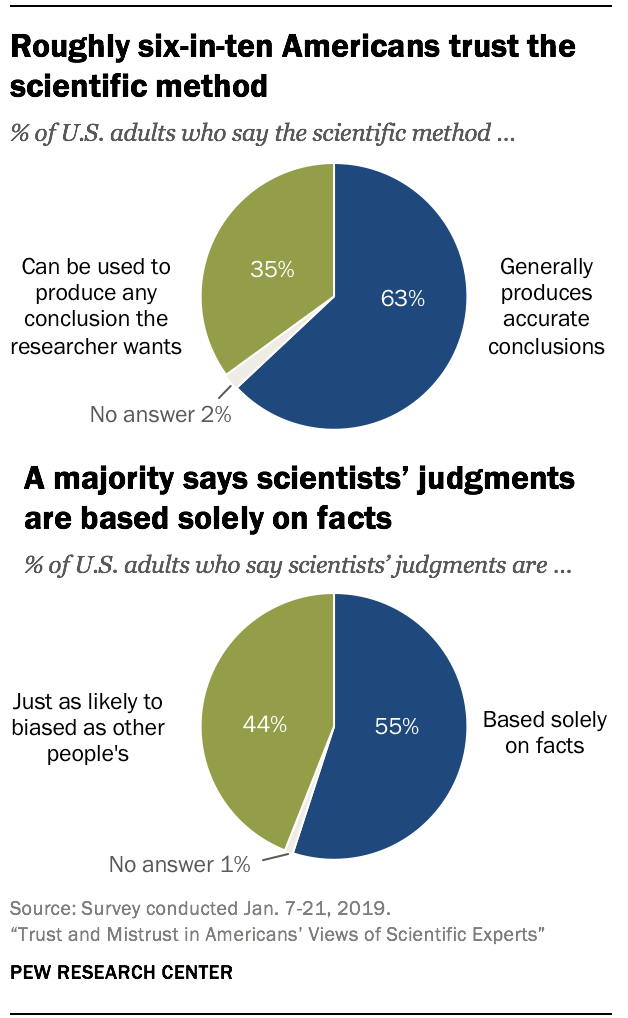 Most Americans believe the processes of science – namely, the scientific method of observing and collecting empirical evidence – are fundamentally sound.

Overall, 63% of Americans say the scientific method generally produces accurate conclusions, while a smaller share (35%) says it can be manipulated to produce a desired conclusion.

Further, a majority of U.S. adults (55%) believe scientists’ judgments are “based solely on the facts,” as opposed to scientists being “just as likely to be biased” in their judgments as other people (44%).

On average, however, more Democrats than Republicans (including independents who identify with each party) are inclined to express confidence in both the scientific method and scientists’ conclusions. 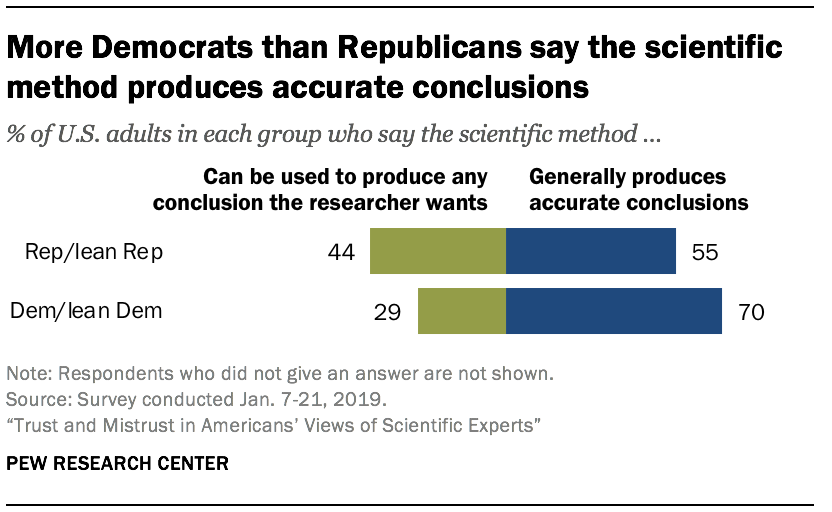 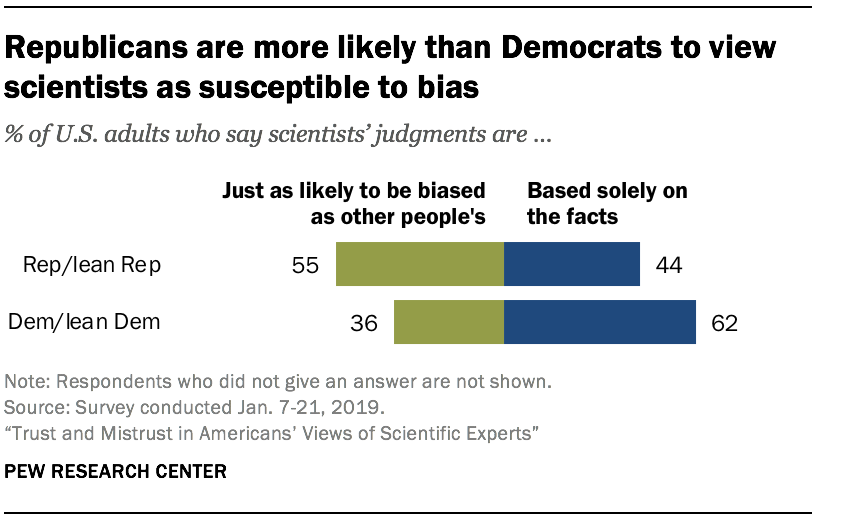 Science knowledge levels also influence people’s views on these issues, but the correlation depends on their partisanship. 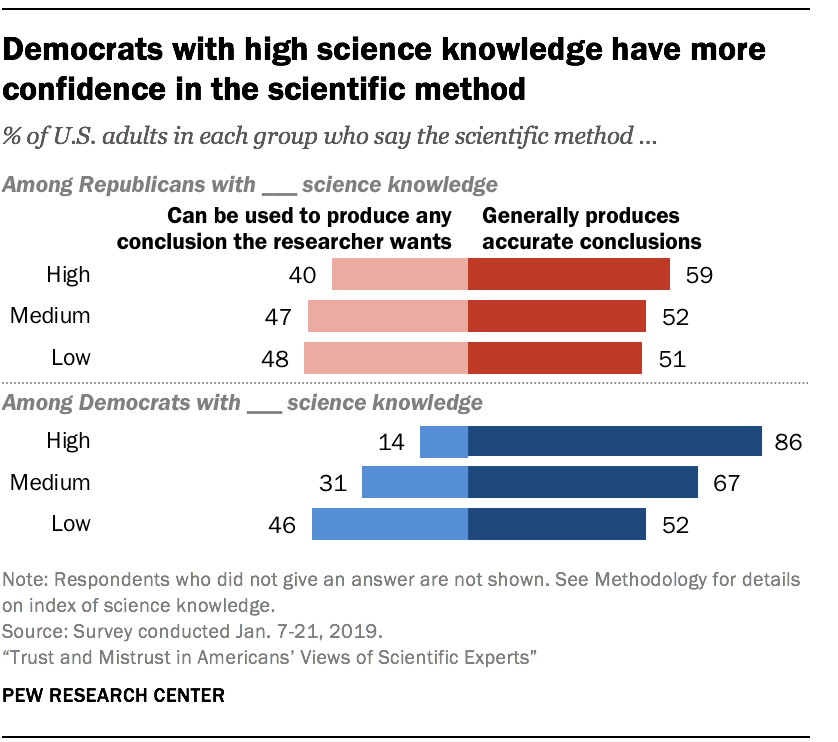 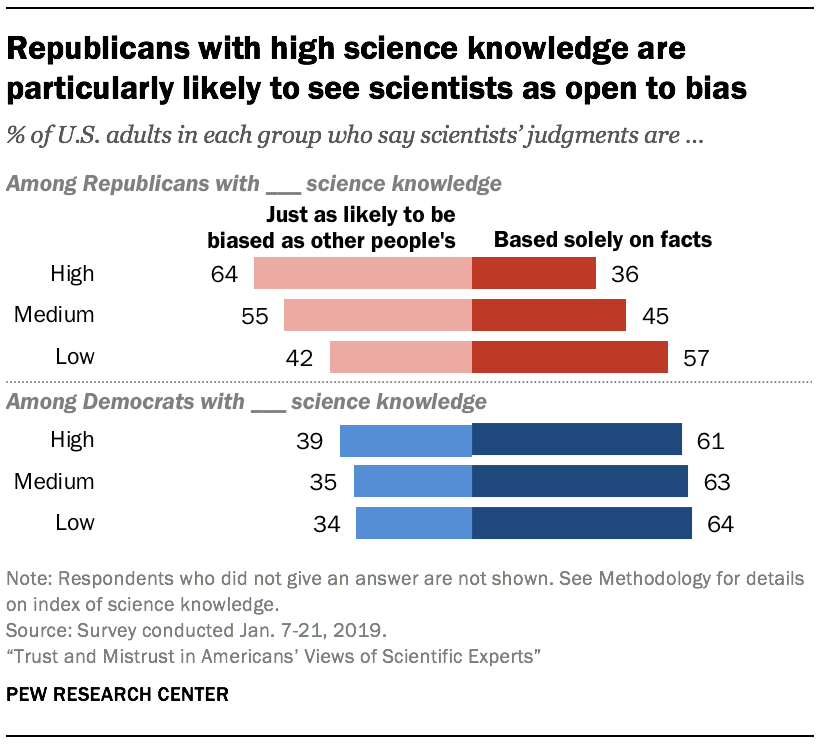 Thus, knowledge and information can influence beliefs about these matters, but it does so through the lens of partisanship, a tendency known as motivated reasoning.

Public trust in scientists is only sometimes correlated with political party

Prior Pew Research Center studies have shown wide political divides on public attitudes related to climate, energy and the environment but no differences or only modest ones when it comes to a host of other science-related issues, including beliefs about the safety of childhood vaccines and the health risks of eating genetically modified foods.

Next: 2. Americans often trust practitioners more than researchers but are skeptical about scientific integrity
← Prev Page
Page1You are reading page2Page3Page4Page5Page6Page7Page8Page9
Next Page →

Trust and Mistrust in Americans’ Views of Scientific Experts
1. Partisanship influences views on the role and value of scientific experts in policy debates
More Democrats than Republicans trust the objectivity of scientists and the scientific method
2. Americans often trust practitioners more than researchers but are skeptical about scientific integrity 3. Americans say open access to data and independent review inspire more trust in research findings 4. Americans generally view medical professionals favorably, but about half consider misconduct a big problem 5. Americans trust dietitians more than nutrition researchers but are skeptical of both groups’ transparency, accountability 6. A majority of Americans have positive views of environmental scientists, but trust in them varies by politics Acknowledgments Methodology