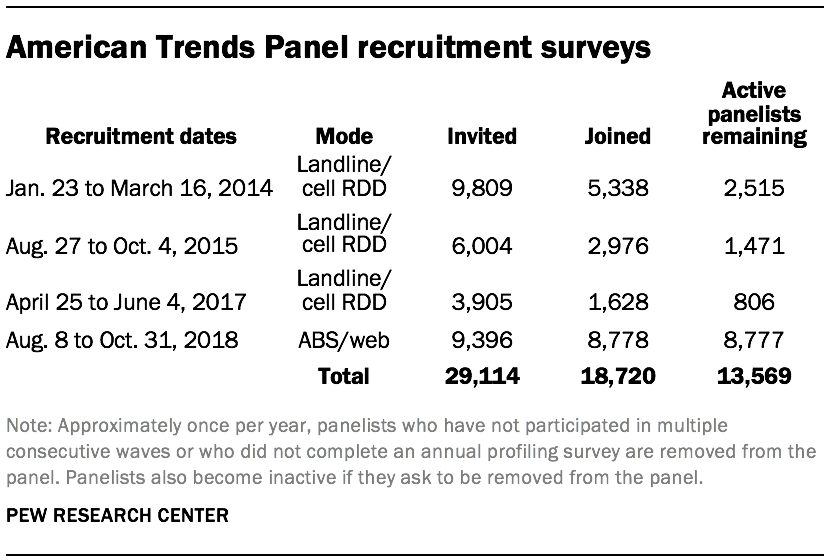 Data in this report are drawn from the panel wave conducted Jan. 7 to Jan. 21, 2019. A stratified random sample of 5,817 panelists was selected from the full panel. Of these, 4,464 panelists responded for a response rate of 77%. The subsample was selected by grouping panelists into five strata so demographic groups that are underrepresented in the panel had a higher probability of selection than overrepresented groups:

Accounting for nonresponse, the cumulative response rate to the recruitment surveys and attrition is 5.6%. The margin of sampling error for the full sample of 4,464 respondents is plus or minus 1.9 percentage points. 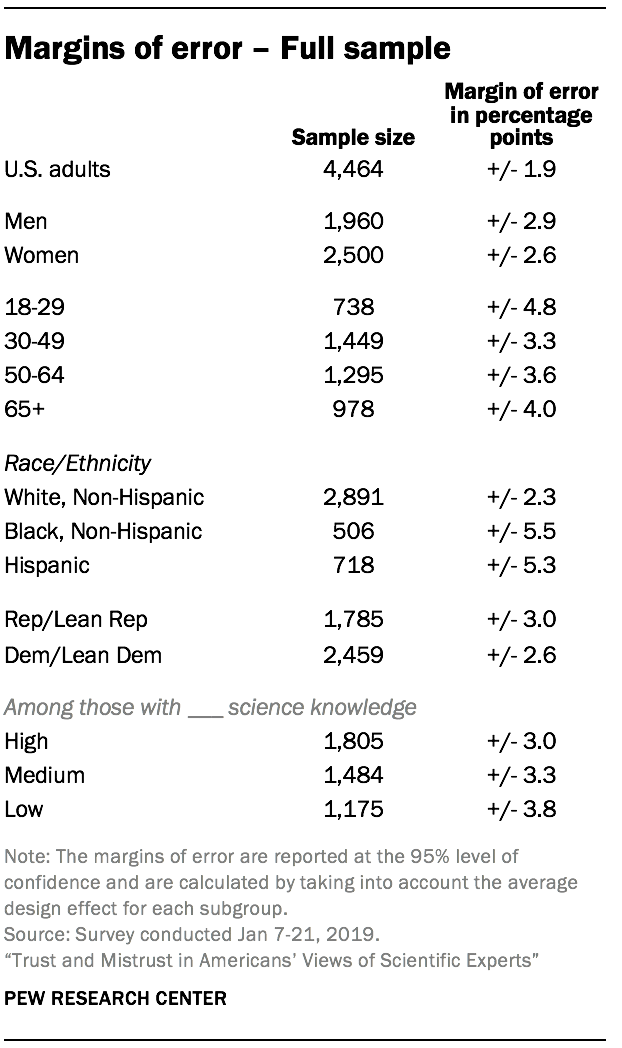 Sampling errors and statistical significance tests take into account the effect of weighting. Interviews are conducted in both English and Spanish, but the American Trends Panel’s Hispanic sample is predominantly U.S. born and English-speaking.

Respondents were also randomly assigned to complete one of two forms or sets of questions on the survey. The tables on the following pages show the unweighted sample sizes and the error attributable to sampling that would be expected at the 95% level of confidence for different groups for form 1 and form 2. 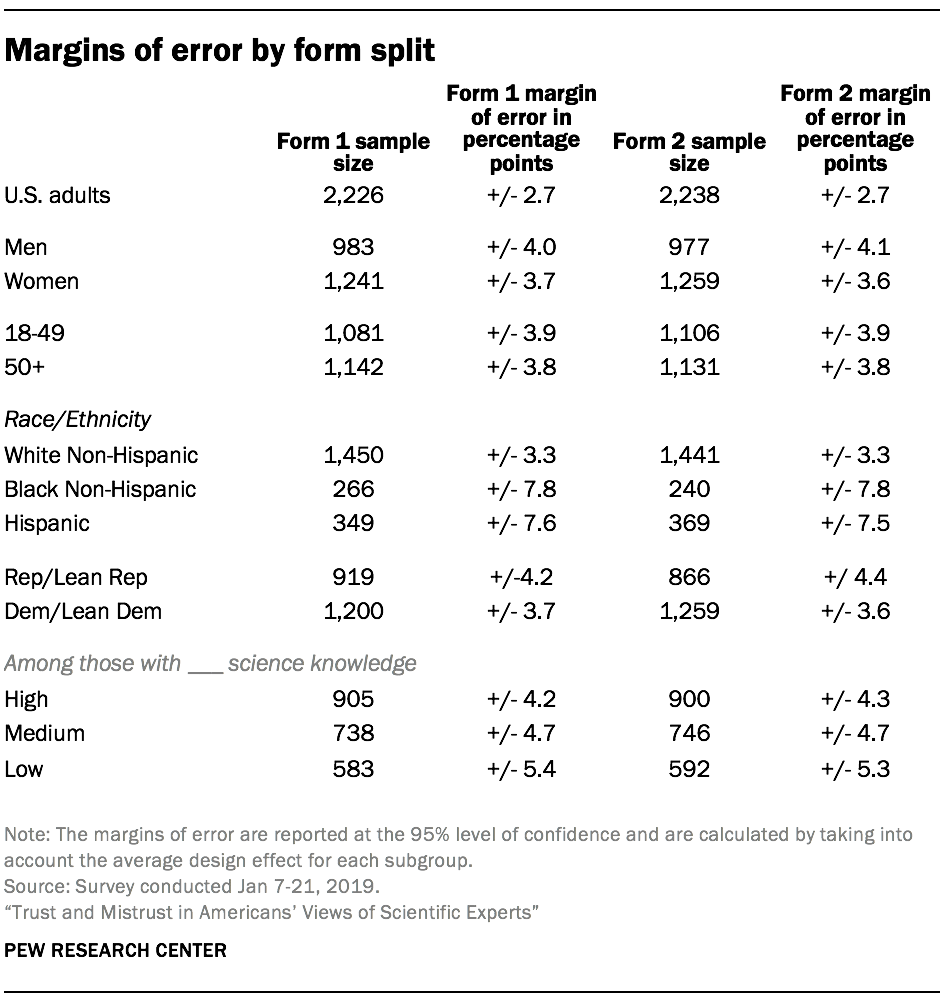 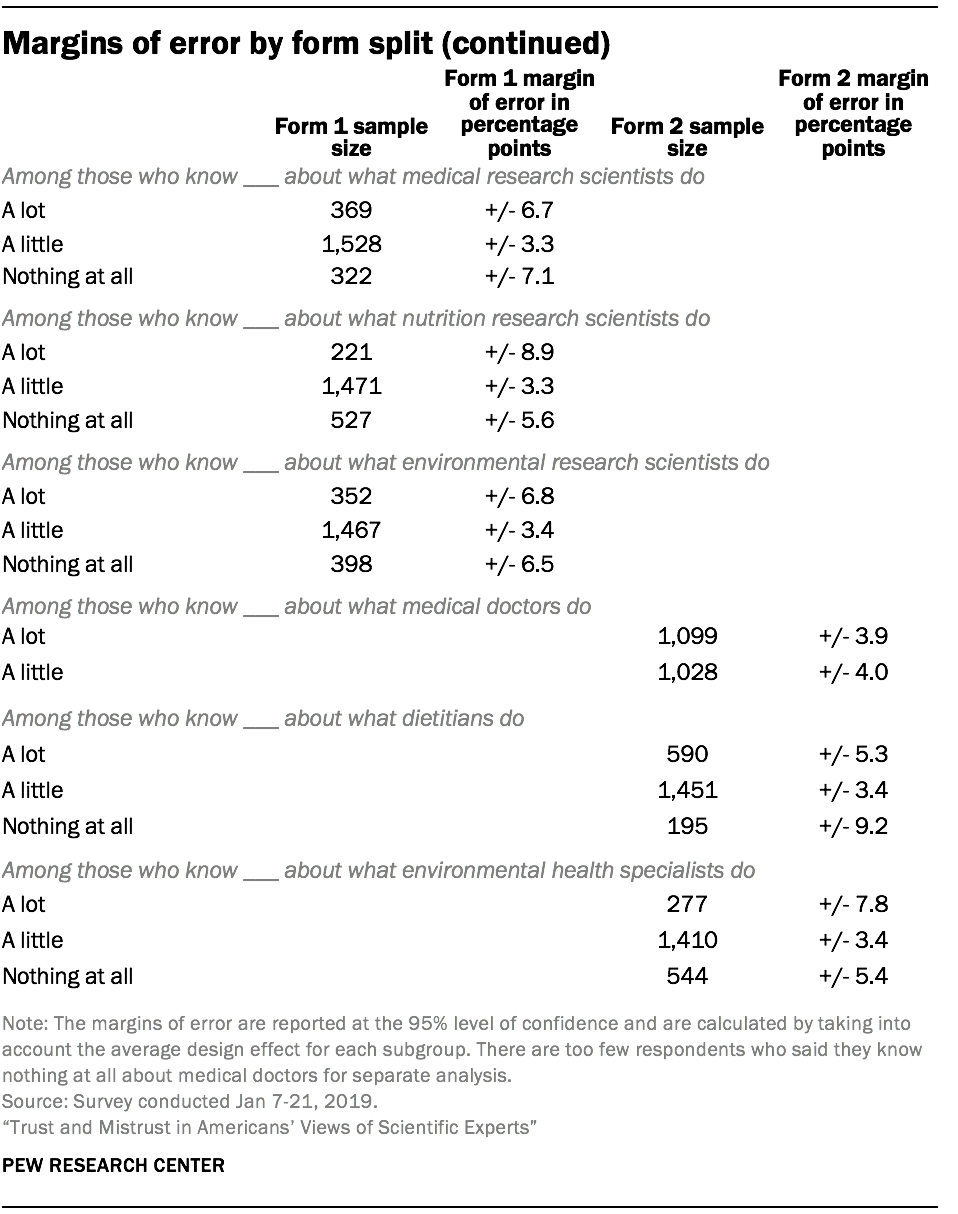 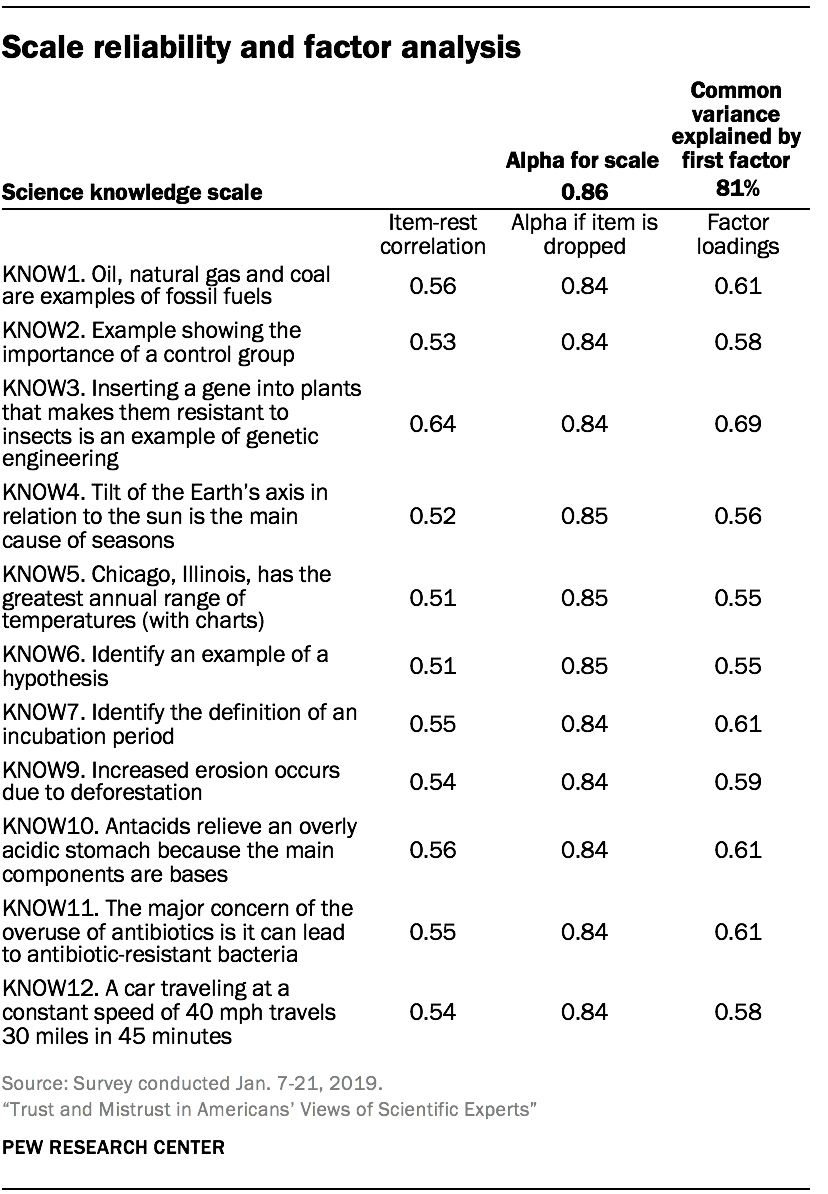 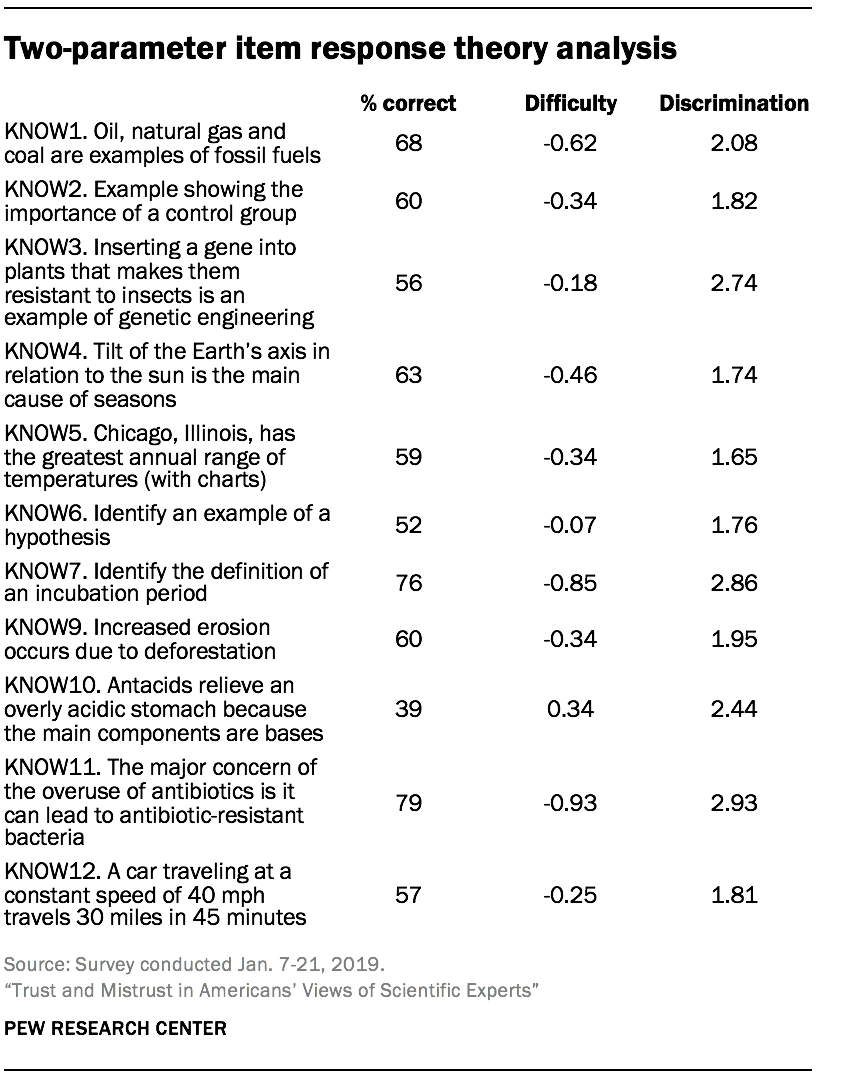 We conducted item response modeling for the scale to evaluate how well it discriminates between people at different levels of knowledge. The analysis fits a two-parameter logistic model, allowing discrimination and difficulty to vary across items.6 Discrimination shows the ability of the question to distinguish between those with higher and lower science knowledge. Difficulty shows how easy or hard each question is for the average respondent. 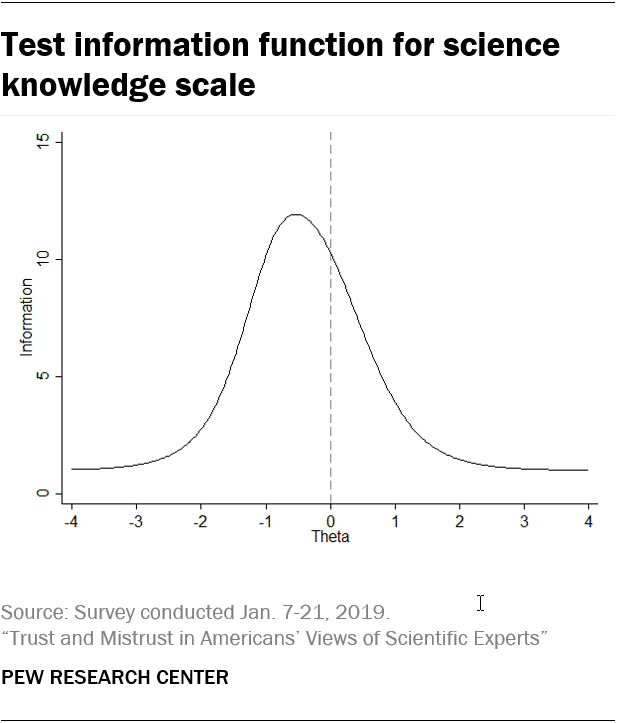 The difficulty parameter estimates are negative for 10 of the 11 items, and positive for one of the items. This shows that the average respondent had a good chance of getting the correct answer on most of the items. 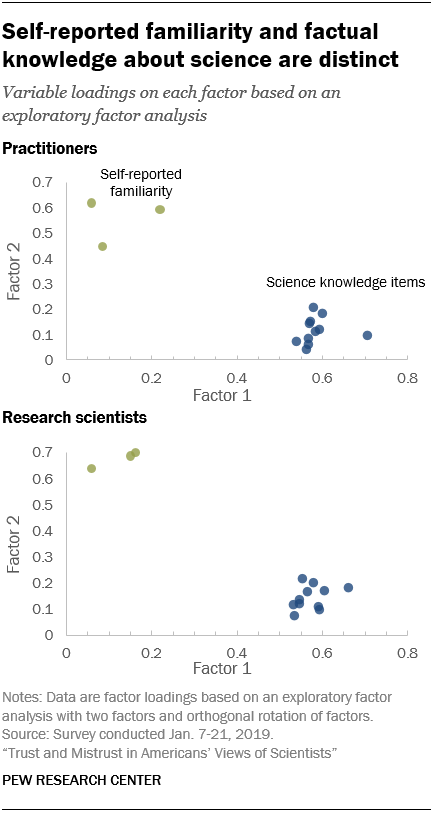 Trust and Mistrust in Americans’ Views of Scientific Experts 1. Partisanship influences views on the role and value of scientific experts in policy debates 2. Americans often trust practitioners more than researchers but are skeptical about scientific integrity 3. Americans say open access to data and independent review inspire more trust in research findings 4. Americans generally view medical professionals favorably, but about half consider misconduct a big problem 5. Americans trust dietitians more than nutrition researchers but are skeptical of both groups’ transparency, accountability 6. A majority of Americans have positive views of environmental scientists, but trust in them varies by politics Acknowledgments
Methodology
The American Trends Panel survey methodologyMeasurement properties of the science knowledge scale