Scholars have long debated the role knowledge about and understanding of science plays in shaping people’s views on science issues. The common supposition is that when ordinary people have different views from those of experts that the differences stem from knowledge gaps: If people knew more, the argument goes, they would agree with the experts.

People’s level of science knowledge is closely related to their interest in science. Past Pew Research Center studies found people’s knowledge of science sometimes has a direct role in explaining their attitudes on science-related issues but the magnitude of the impact varies depending on the issue. And, the bulk of the research literature has shown only a modest relationship between science knowledge and people’s attitudes.11

The effects of science knowledge tend to be modest and inconsistent in predicting people’s views about climate change and climate scientists, especially in comparison with the clearer and more striking way that people’s views are tied to their political party preferences, ideology and level of personal concern with climate issues. To the extent that science knowledge influences judgments related to climate change and trust in climate scientists, it affects views among Democrats, but not Republicans. In sum, Americans’ science knowledge can sometimes influence their judgments about climate matters but, even in these cases, people’s political orientations tend to take precedence.

To test whether the patterns from cross tabulations were robust, we also used statistical modeling techniques to examine the role of science knowledge as a predictor of people’s views while simultaneously controlling for their political orientations, personal concern with the issue of climate change, education, gender, age, and race and ethnicity. The results of these analyses are summarized in this chapter and specifics are shown in the detailed tables. The findings underscore a strong, substantive role for both party/ideological factors and issue-concern as predictors of people’s views across this set of some 25 beliefs related to climate change or people’s views of climate scientists.

A new index of people’s knowledge about science 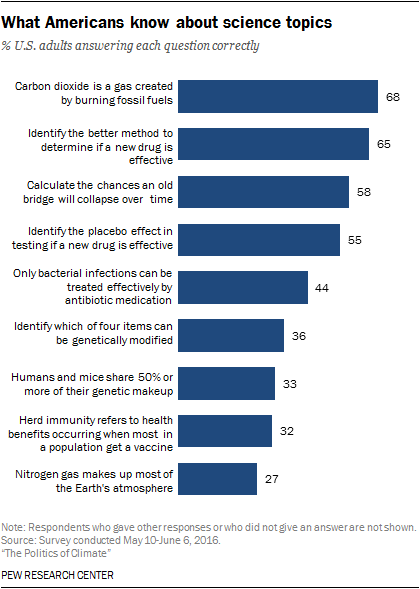 The Pew Research Center survey included a set of nine questions to tap people’s overall knowledge of science topics. The set captures factual information related to Earth sciences and life sciences, including one question on numeracy and two related to understanding scientific methods.12

Most Americans can correctly identify carbon dioxide as a gas created by the burning of fossil fuels (68%), and a similar share, 65%, recognize that a comparison or control group is a better method for testing the effectiveness of a new drug than simply giving the drug to a single group.

Some 58% of Americans correctly calculated the conditional probability of a bridge collapsing over time. This question was adapted from literature measuring people’s ability to use numerical concepts, a concept often linked with people’s health literacy. 13

A slight majority (55%) of Americans also identify the placebo effect in testing the effectiveness of a drug treatment.

People’s knowledge of items that can be genetically modified varies. A minority of adults – 36% – know that a mosquito, corn, an apple, and salmon can all be genetically modified. About of third of Americans (33%) know that humans share at least half of their genetic makeup with mice or that herd immunity refers to health benefits occurring when most people in a population get a vaccine (32%).

The most challenging question in this set: Which gas makes up most of the Earth’s atmosphere? Some 27% of Americans correctly identify nitrogen.

To be sure, how Americans score in knowledge about science depends on the topics covered and the difficulty of the questions. The set of questions aims to capture people’s tendency to know relatively more or less about science, generally. The average American got just below half of these questions correct. The mean score is 4.2 out of 9. About a fifth of adults (22%) have a relatively high level of science knowledge, answering at least seven questions correctly (including 4% with a perfect score). Some 48% of U.S. adults have a medium level of knowledge, getting three to six correct answers and 30% of adults have a low level of science knowledge, getting no more than 2 answers correct.

There are differences among educational and demographic groups in science knowledge 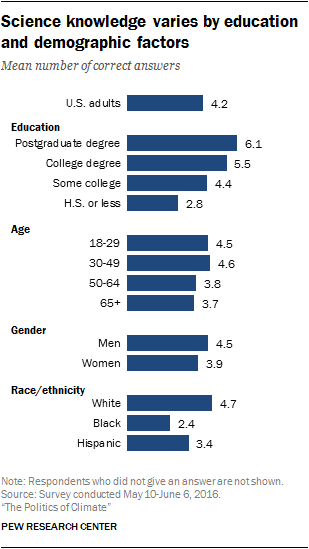 There are substantial differences in knowledge levels about science among subgroups of the general public, consistent with previous studies by Pew Research Center and others.14

Science knowledge is closely linked with educational levels. People with postgraduate degrees answer more than twice as many questions correctly as those with high school degrees or less. The difference in knowledge between those with postgraduate degrees and those with high school degrees or less ranges from 29- to 45-percentage points across our nine questions. (See the detailed tables). There is a sizeable and significant role of education in predicting knowledge on the index even when controlling for gender, age, and race and ethnicity in a linear regression model.

But there are also differences by age, gender, and race and ethnicity in knowledge of science topics. Younger adults, ages 18 to 49, score higher on the index than those ages 50 and older. Those under age 50 are more likely than their older counterparts to answer eight of the 9 questions in the index correctly. The one exception to this pattern: awareness that antibiotics are effective in treating bacterial, but not other kinds of infections. Half of adults ages 65 and older (50%) answer this correctly, compared with one-third (33%) of those ages 18 to 29.

Men also score higher, on average, than women on the science knowledge index. Gender differences tend to vary across the individual questions. Men are more likely than women to answer four of the nine questions correctly. On one question the pattern is reversed; some 48% of women correctly identify bacterial infections as the only type of infection effectively treated with antibiotics, compared with 40% among men. And, men and women are about equally likely to know the correct answers to the four other questions including those that tap understanding of the scientific process and biomedical topics. 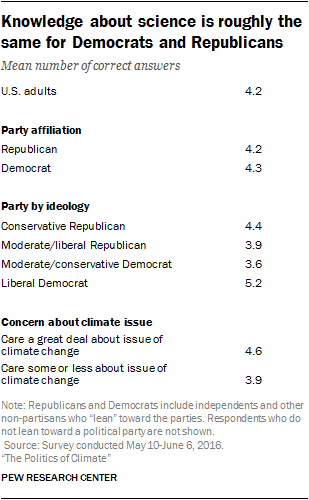 There are also differences associated with race and ethnicity in the science knowledge questions. Whites are more likely than either Hispanics or blacks to answer more of these questions correctly; the mean number correct is 4.7 out of 9 for whites, 3.4 for Hispanics and 2.4 for blacks. Educational differences across race and ethnic groups may contribute to these differences. But even after controlling for education in a linear regression model, whites are predicted to answer more questions correctly than blacks and Hispanics. These differences are consistent with findings and analysis in the 2015 Pew Research Center report on science knowledge.

Democrats and Republicans score about equally well on the nine-item index. However, liberal Democrats tend to score a bit higher than do other political groups, overall.

Americans’ general knowledge about science is no more than modestly related to their views about climate matters. Pew Research Center used a series of statistical models to better understand the role of science knowledge, education and other factors in public opinion about these topics. The analysis finds no strong, direct connection between people’s science knowledge and their beliefs about the causes of global warming or a host of other beliefs about climate-related matters, scientists and the factors influencing climate research. The results of all of these analyses are shown in the detailed tables.16 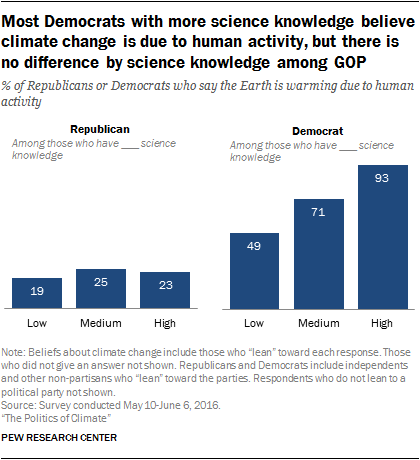 The most common pattern is that people’s level of science knowledge, or of education, has either no significant effect or only a modest effect compared with political party, ideology and issue-concern in predicting their beliefs across this set.

There are likely to be complex reasons why people’s scientific knowledge is not strongly linked to their views on climate issues. For instance, to the extent that science knowledge influences judgments related to climate change and trust in climate scientists, it generally influences views among Democrats, but not Republicans.

Thus, it could be the case that people’s political orientations are an anchoring point for applying their knowledge – rather than the other way around.17 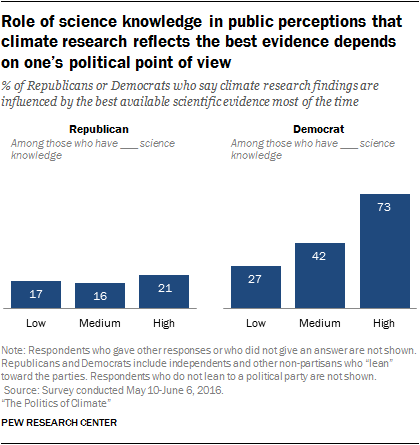 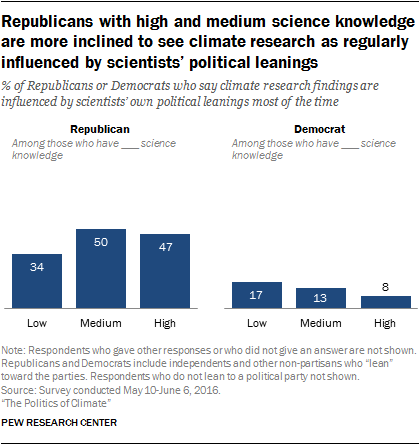 The role of science knowledge in people’s trust in climate scientists and their work also depends on people’s political orientations. For example, Democrats with higher science knowledge are especially inclined to say the best scientific evidence regularly influences climate research findings. There is no difference among Republicans with high, medium or low knowledge levels in views about this.

Next: About this report
← Prev Page
Page1Page2Page3Page4You are reading page5Page6Page7Page8Page9
Next Page →

The Politics of Climate 1. Public views on climate change and climate scientists 2. Public opinion on renewables and other energy sources 3. Everyday environmentalism
4. Public knowledge about science has a limited tie to people’s beliefs about climate change and climate scientists
About this report Acknowledgments Methodology Appendix A: Detailed tables