Millions of people see science-related information on their Facebook feeds or elsewhere on social media, but the kinds of science stories people most likely encounter are often practical tips with “news you can use” or promotions for programs and events rather than new developments in the science, engineering and technology world.

In an effort to better understand the science information that social media users encounter on these platforms, Pew Research Center systematically analyzed six months’ worth of posts from 30 of the most followed science-related pages on Facebook. These science-related pages included 15 popular Facebook accounts from established “multiplatform” organizations – for example National Geographic and the Discovery Channel – along with 15 popular “Facebook-primary” accounts from individuals or organizations that have a large social media presence on the platform but are not connected to any offline, legacy outlet.

Some of the key findings from this analysis:

Millions of people follow science-related pages on Facebook. Multiplatform organizations have taken advantage of Facebook’s capacity to reach large numbers of followers on a new platform. For instance, as of June 2017, National Geographic had 44.3 million Facebook followers, Discovery had 39 million and Animal Planet had 20 million. (See the Appendix for more details about the nature of these pages.)1 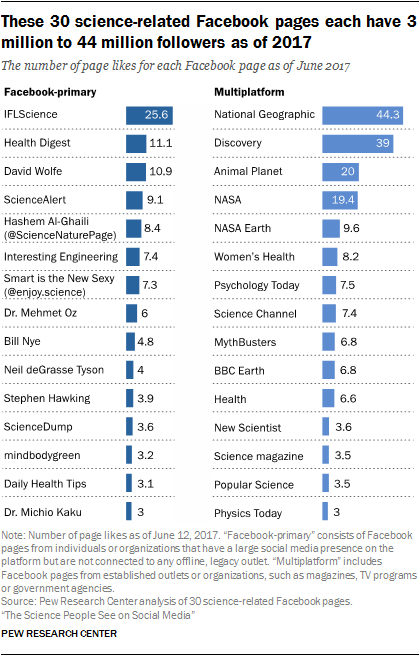 At the same time, “Facebook-primary” pages have arisen in a relatively short time and built impressive audiences. This illustrates the degree to which social media have transformed the media landscape, making it easier and cheaper for those with few resources to provide unmediated content and garner followings. For example, a single enterprising writer built the Facebook page IFLScience in 2012, which has grown to 25.6 million followers and a staff of approximately 15. Social media have also provided a platform for prominent science figures such as Stephen Hawking2 (followed by 3.9 million users on Facebook as of June 2017), Bill Nye (followed by 4.8 million) and Neil deGrasse Tyson (followed by 4 million).

New scientific discoveries are covered in 29% of the posts on these pages. Each of these 30 science-related pages has its own distinctive flavor. Still, a few common themes emerged from a detailed content analysis of a random sample of 6,582 posts published in the first half of 2017. 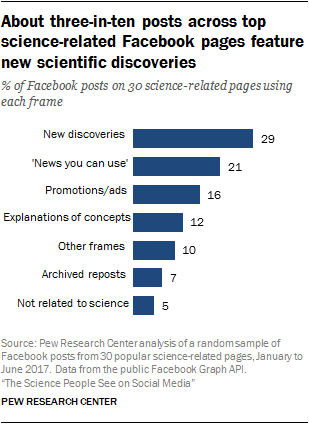 While these 30 Facebook pages with a self-described focus on a science-related area cover a range of topics, just 29% of the Facebook posts from these pages had a focus or “frame” around information about new scientific discoveries. Some pages used a new-discovery frame in the bulk of their posts. For example, that was true of ScienceAlert, IFLScience, NASA Earth and New Scientist. But that framing was rare on other pages. Across the 30 pages, other frames were evident when researchers coded a representative sample of the posts. Fully 21% of posts featured the practical applications of science information, relying on a “news you can use” frame. Another 16% of posts were promotions or advertisements for media or events, 12% of posts were aimed at explaining a science-related concept, and the remainder used some other frame.

The volume of posts from these science-related pages has increased over the past few years, especially among multiplatform pages. On average, the 15 popular multiplatform Facebook pages have increased their production of posts by 115% since 2014, compared with a 66% increase among Facebook-primary pages over the same time period.

The average number of user interactions per post – a common indicator of audience engagement based on the total number of shares, comments, and likes or other reactions – tends to be higher for posts from Facebook-primary accounts than posts from multiplatform accounts. From January 2014 to June 2017, Facebook-primary pages averaged 14,730 interactions per post, compared with 4,265 for posts on multiplatform pages. This relationship held up even when controlling for the frame of the post.

Higher engagement is seen on posts focused on visuals with little additional information. Other posts with relatively high engagement include calls to action and posts dealing with science funding. Analysis of the types of posts yielding the highest average of interactions shows that visual posts with little or no text tend to yield more audience engagement than most other frames. Additionally, posts with an explicit call to action produce high numbers of interactions. However, such posts are quite rare, comprising just 2% of all posts across the 30 pages. And, posts on Facebook-primary pages related to federal funding for agencies with a significant scientific research mission were particularly engaging, averaging more than 122,000 interactions per post in the first half of 2017.

The most-engaging posts from either Facebook-primary or multiplatform pages during this period included a wide range of topics and frames. Video was a common feature of these highly engaging posts whether they were aimed at explaining a scientific concept, highlighting new discoveries, or showcasing ways people can put science information to use in their lives.

Highly engaging posts among these pages did not always feature science-related information. Four of the top 15 most-engaging posts from Facebook-primary pages featured inspirational sayings or advice such as “look after your friends” or “believe in yourself.” And, the single most-engaging post among the multiplatform pages was an expression of support for those in Paris after a terrorist attack.

There is considerable variation in what topics these popular Facebook science-related pages focus on. Most pages in this sample specialized on posts connected with just one or two science topics. For example, pages such as Daily Health Tips and Health Digest focused a majority of their content on health and medicine topics, while NASA for the most part posted content related to astronomy and physics. Only four of the 30 pages covered a roughly even mix of posts on several topics, with no single topic making up more than one-in-five posts on the account.

These findings emerge as more and more material on all kinds of subjects is posted and disseminated on social media. A 2017 Pew Research Center survey found most social media users in the U.S. report seeing science-related posts and a third (33%) consider it an important way they get science news. Some 44% of social media users say they see content unique to that platform at least sometimes, and 26% of users report that they follow a science-related page or account. Other Pew Research Center surveys show that Facebook is used by a far larger share than other social media platforms.

It is important to note that for the purposes of this analysis the selection of “science-related” pages was based on each page’s self-statement that it covers content about science or about a major area connected with science, technology, engineering or math. (Pages focused primarily on commercial or advocacy missions were excluded.) The set of 30 covers a broad range of pages available to social media users, including several that are widely seen in the scientific community as offering questionable or even “pseudoscientific” advice or information.

As concerns about public understanding and acceptance of scientific evidence have increased over the past few years, this analysis provides a window into the sources of information that – while may differ from consensus views in the scientific community – have, nonetheless, attracted millions of followers and more who see posts from these pages in their Facebook news feed even without following the page. As such, these data help better understand the sources of information that may influence public views and understanding of science-related issues. 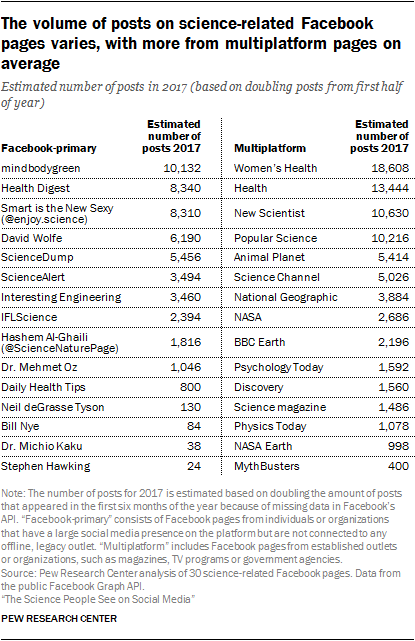 The 2017 annual volume of posts across the 15 Facebook-primary pages ranged from about 24 posts by Stephen Hawking to more than 10,000 posts from mindbodygreen, a health and wellness media company. Four of these accounts – all of which are associated with prominent scientific figures – have more than 3 million followers but posted no more than about 200 times in 2017. Among the other pages, most increased the volume of posts over this time period. See Appendix table for details. 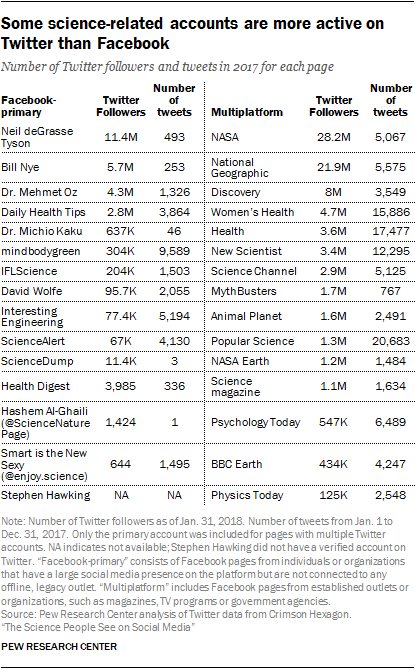 The profile of these science-related accounts can vary across other social media platforms. To illustrate, Pew Research Center looked at Twitter activity from the same 30 organizations as of January 2018.

While far more adults in the U.S. use Facebook (68%) than Twitter (21%), according to a 2018 Pew Research Center survey, a handful of science-related pages in this study were comparatively more active on Twitter.

Neil deGrasse Tyson had about 11.4 million Twitter followers as of January 2018, roughly 2.5 times more than his 4 million Facebook followers. He was more active tweeting (493 times in 2017) than he was posting content on Facebook (about 130 times in 2017).

Similarly, Bill Nye was more active on Twitter than on Facebook (253 tweets in 2017, compared with about 84 posts).

But several of these pages were less active on Twitter, particularly among the Facebook-primary pages. The list includes Health Digest, David Wolfe, ScienceDump, Hashem Al-Ghaili and Smart is the New Sexy, all of which have had a far less active presence on Twitter than Facebook and had orders of magnitude fewer followers on Twitter.5 Stephen Hawking did not have an official Twitter account; Hashem Al-Ghaili and ScienceDump barely had a presence on Twitter, each with fewer than 5 posts in 2017.

Next: 1. Most science-related Facebook pages specialize on a few science topics; some include posts far afield from science
← Prev Page
You are reading page1Page2Page3Page4Page5
Next Page →

Social Media Use in 2018
Science News and Information Today
4. Most Americans see at least some science posts on social media but tend to distrust what they see
Mixed Messages about Public Trust in Science
How Scientists Engage the Public
Defining generations: Where Millennials end and Generation Z begins
Growing Share of Americans Say They Plan To Get a COVID-19 Vaccine – or Already Have
Quiz: Are you a Core Conservative? A Solid Liberal? Or somewhere in between?
Most Americans Support Tough Stance Toward China on Human Rights, Economic Issues
In their own words: What Americans think about China