While some types of potential human enhancements may seem like science fiction to observers not immersed in the world of biotechnology, there are any number of enhancements already available to the general public today. From laser eye surgery to teeth whitening, modern human enhancements are widely known today.

The theme of “everyday enhancements” arose first in the series of focus group discussions Pew Research Center held as part of the development of this survey. As people thought through the possibility of using cutting-edge enhancements such as gene editing, brain chip implants or synthetic blood in the future, many also drew connections to cosmetic surgery and other kinds of enhancements widely available today.

As a point of comparison, the survey also included a series of questions about the kinds of procedures people can undergo today.13

The survey finds most Americans express a “go slower” reaction to the kinds of enhancements widely available today, mirroring some of the concerns expressed about future possibilities. But at least half of Americans – and in some cases, large majorities – say each of six kinds of enhancement procedures (ranging from surgery to prevent conception to eye surgery to elective cosmetic surgery) is an appropriate use of technology. 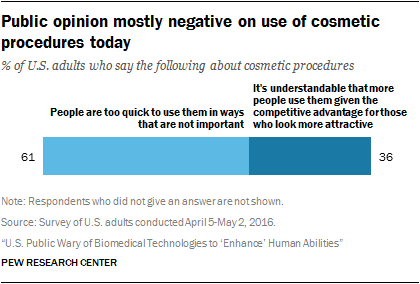 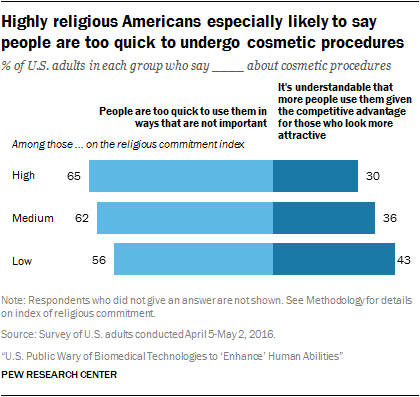 There are only small differences across religious tradition on this question. Large shares of all major religious groups, including those with no religious affiliation, say people are too quick to undergo cosmetic procedures in ways that are not really important.

Many people have at least indirect experience with enhancement procedures

To gauge familiarity with enhancements available today, the survey asked respondents whether they ever had any of several kinds of procedures, including elective cosmetic surgery, laser eye surgery, skin or lip injections, cosmetic dental procedures, hair replacement surgery or vasectomy/tubal ligation procedures. Altogether, about three-in-ten Americans (31%) have had at least one of these six procedures, and most adults (58%) know a close friend or family member who has had one or more. 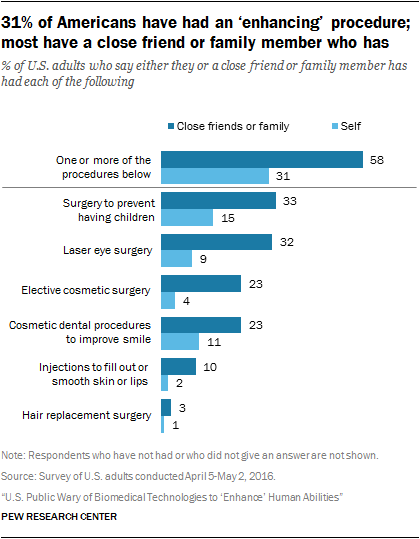 Most of these procedures are cosmetic in nature, while two are not: contraceptive surgery and laser eye surgery.

Tubal ligation and vasectomy are akin to some of the potential future enhancements in that they involve a surgical procedure with a specific aim – in this case, contraception. A third of adults have a close friend or family member who has had this surgery, while 15% of adults say they have had either a vasectomy or tubal ligation procedure themselves.

Laser eye surgery, another procedure typically classified as an elective, cosmetic procedure, is included in this context because it is a bodily change aimed at enhancing one’s natural vision. Some 9% of adults report having had laser eye surgery themselves, while 32% have a close friend or family member who has done so.

About one-in-ten Americans (11%) also report having had cosmetic dental procedures to improve their smile, while smaller shares say they have had elective cosmetic surgery (4%), skin or lip injections (2%) or hair replacement surgery (1%).

As one might expect, direct experience with these procedures tends to vary by gender, income and age. Some 38% of women and 24% of men say they have had one or more of the six procedures. Four-in-ten (39%) of those with family incomes of $150,000 or higher have had at least one of these procedures, compared with 26% among those with family incomes under $30,000 annually. Personal experience with the six procedures also is more common among older adults; 40% of those ages 65 and older have had at least one of the procedures, compared with 19% among adults ages 18 to 29. 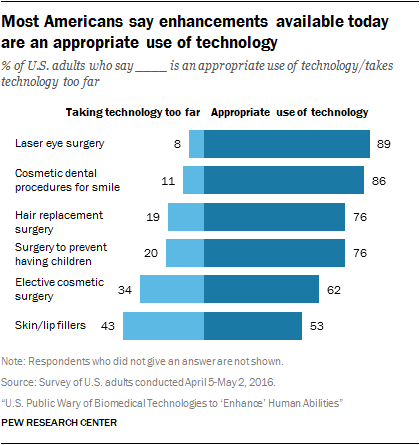 A smaller majority (62%) says elective cosmetic surgery is an appropriate use of technology, and a slim majority (53%) says this about the use of skin and lip fillers (such as Botox or hyaluronic acid).

Differences by education and income are apparent in people’s views about the enhancements available today, particularly between those at the lowest levels of income and education compared with those in the middle and higher levels.

People with incomes of $75,000 or higher are particularly likely to say each of these six types of enhancements is an appropriate use of technology.14 For instance, 78% of Americans in this income bracket say elective cosmetic surgery is an appropriate use of technology, compared with just half (49%) of those with family incomes under $30,000 – a gap of 29 percentage points.

Differences by educational attainment follow a similar pattern. For example, those with a college or postgraduate degree are more likely than adults with a high school degree or less schooling to say surgery to prevent pregnancy is an appropriate use of technology (86% vs. 65%).

Most Americans say cosmetic surgery is appropriate, but few see it as having more benefits than downsides for society 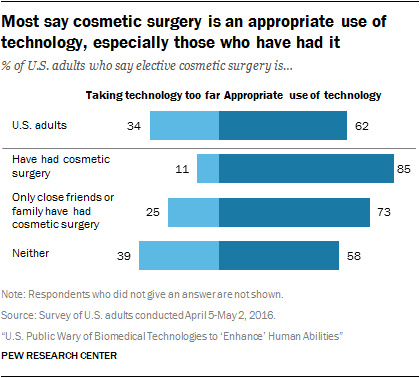 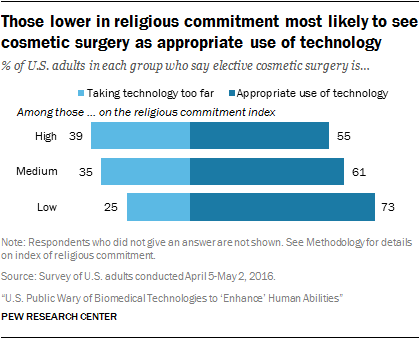 Majorities of most major religious groups say cosmetic surgery is an appropriate use of technology. Black Protestants and Hispanic Catholics are more closely divided on this issue, as are blacks and Hispanics overall. 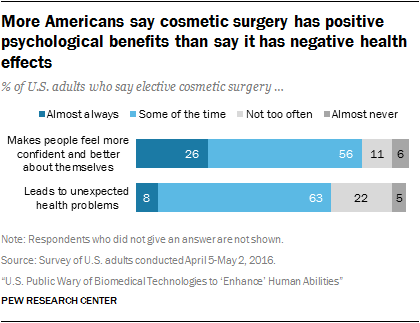 The general public appears somewhat skeptical about the psychological benefits of cosmetic surgery. About a quarter of Americans (26%) say cosmetic surgery “almost always” makes people feel more confident and better about themselves, but a majority (56%) say this only occurs “some of the time.” 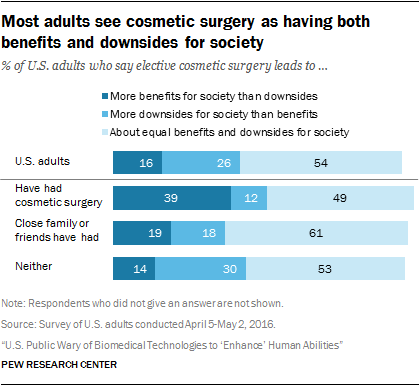 Overall, about half of Americans (54%) say elective cosmetic surgery leads to both benefits and downsides for society, with a smaller share (26%) expressing the belief that there are more downsides than benefits. Relatively few (16%) say there are more benefits than downsides.

Religious commitment and affiliation do not have a significant effect on views of overall benefits and downsides of cosmetic surgery for society.

Next: 6. Public sees science and technology as net positives for society
← Prev Page
Page1Page2Page3Page4Page5You are reading page6Page7Page8
Next Page →