Muslims number 1.6 billion, representing 23% of all people worldwide. There are two major branches of Islam – Sunni and Shia. The overwhelming majority (87-90%) of Muslims are Sunnis; about 10-13% are Shia Muslims.8

Muslims are concentrated in the Asia-Pacific region, where six-in-ten (62%) of all Muslims reside. Many Muslims also live in the Middle East and North Africa (20%) and sub-Saharan Africa (16%). The remainder of the world’s Muslim population is in Europe (3%), North America (less than 1%) and Latin America and the Caribbean (also less than 1%). 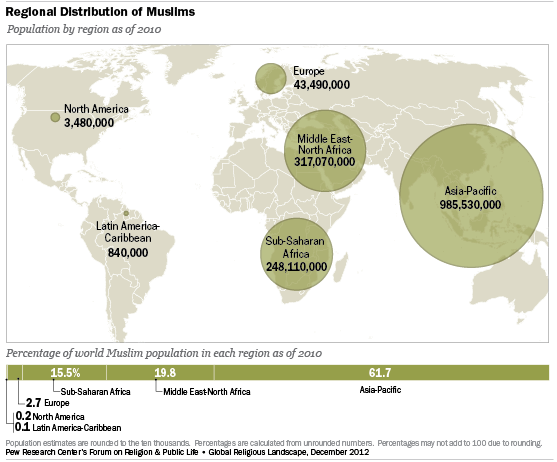 Although a majority of the world’s Muslims live in Asia and the Pacific, only about one-in-four people (24%) in that region are Muslims. By contrast, the Middle East-North Africa region has an overwhelmingly Muslim population (93%), but they represent only about 20% of the world’s Muslims. Muslims also make up about three-in-ten people in sub-Saharan Africa, 6% of those who live in Europe, 1% of North Americans, and less than 1% of the population of Latin America and the Caribbean.

Muslims make up a majority of the population in 49 countries. Nearly three-quarters of all Muslims (73%) live in these countries. Although Muslims are a minority in India (14% of the total population), India nonetheless has one of the largest Muslim populations in the world (in raw numbers). 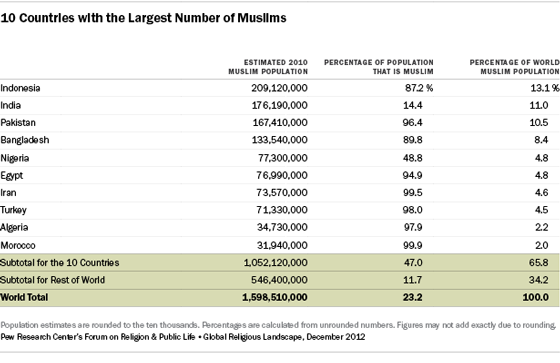 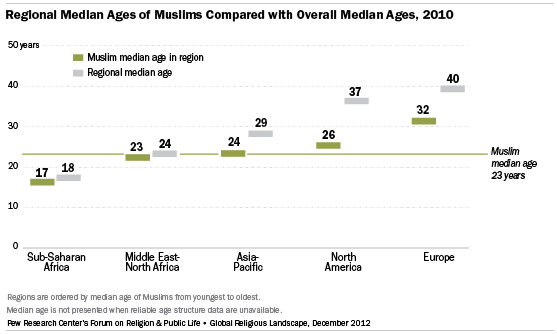 8 For definitions of Sunni and Shia Muslims and more information on their geographic distribution, see the Pew Forum’s October 2009 report “Mapping the Global Muslim Population: A Report on the Size and Distribution of the World’s Muslim Population.” (return to text)

9 India and Pakistan have Muslim populations of roughly similar size, and it is not entirely clear which is larger. The Pew Forum previously estimated that Pakistan had the world’s second-largest Muslim population and India had the third-largest; see the Pew Forum’s January 2011 report “The Future of the Global Muslim Population” and October 2009 report “Mapping the Global Muslim Population.” The difference between the rankings in this report and the previous reports is primarily due to a downward revision by the United Nations Population Division of its estimate of the size of Pakistan’s total population and an upward revision of the U.N. estimate of India’s total population. For more details, see the discussion in the Methodology. (return to text)