There are about 488 million Buddhists worldwide, representing 7% of the world’s total population as of 2010. The three major branches of Buddhism in the modern world are Mahayana Buddhism, Theravada Buddhism and Vajrayana (sometimes described as Tibetan) Buddhism.12 While affiliation with particular branches of Buddhism is not measured in most censuses and surveys, Mahayana Buddhism is widely believed to be the largest, because it is prevalent in several countries with very large Buddhist populations, particularly China, Japan, South Korea and Vietnam. Theravada Buddhism, the second-largest branch, is concentrated in such countries as Thailand, Burma (Myanmar), Sri Lanka, Laos and Cambodia. Vajrayana Buddhism, the smallest of the three major branches, is concentrated in Tibet, Nepal, Bhutan and Mongolia. The Buddhist population figures in this study also include members of other groups that identify as Buddhist, such as Soka Gakkai and Hoa Hao. 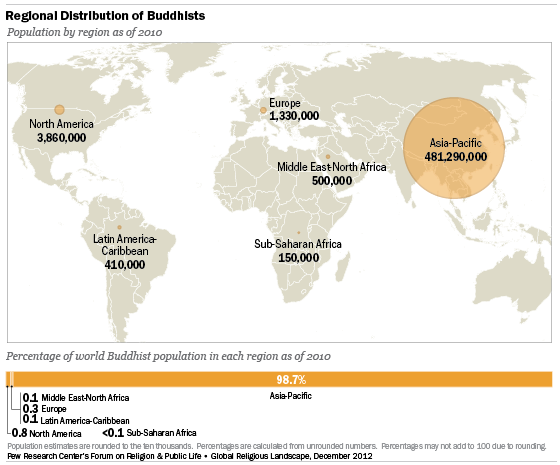 Buddhism began in Asia, and the vast majority of all Buddhists (nearly 99%) still live in the Asia- Pacific region. Only two other regions – North America (3.9 million) and Europe (1.3 million) – have more than 1 million Buddhists.

Although the majority of Buddhists live in Asia and the Pacific, only about one-in-eight people (12%) in that region are Buddhists. About 1% of North Americans are Buddhists. In each of the other four regions, Buddhists make up less than 1% of the population. 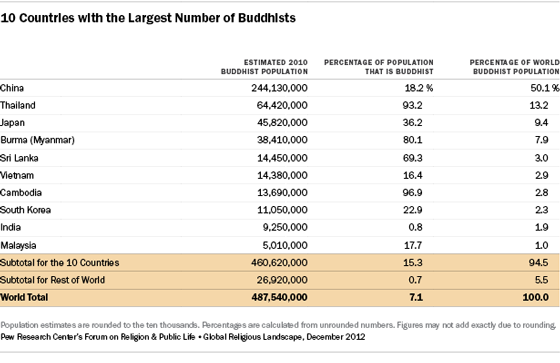 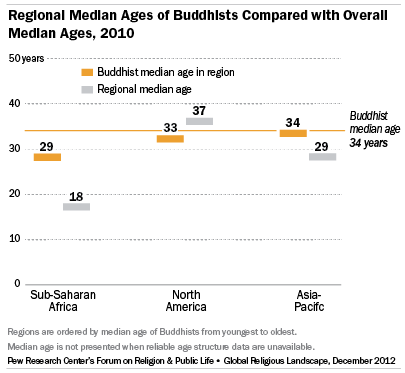 12 Alternatively, some scholars consider there to be two main Buddhist branches – Mahayana and Theravada – and classify Vajrayana as part of the Mahayana branch. Other schools within the Mahayana tradition include Zen, Nichiren and Pure Land. See, for example, Williams, Paul. 2008. “Mahayana Buddhism: The Doctrinal Foundations.” Routledge. (return to text)