There are about 1 billion Hindus around the world, representing 15% of the global population. Major traditions within Hinduism include Vaishnavism, which is devoted to worship of the god Vishnu, and Shaivism, organized around worship of the god Shiva. Because of a lack of census or survey data on subgroups of Hindus in most countries, however, reliable estimates of the size of the traditions are not available.

Hinduism traces its roots to the Asia-Pacific region, where the overwhelming majority of its adherents (more than 99%) reside. Indeed, Hinduism is the most geographically concentrated of the eight religious groups analyzed in this rep ort. Less than 1% of Hindus live outside Asia and the Pacific. 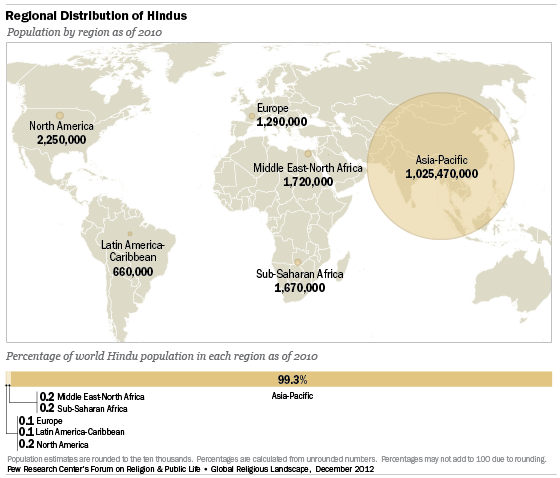 Although most Hindus live in Asia and the Pacific, only about one-in-four people (25%) across that vast and populous region are Hindu. Hindus make up less than 1% of the general population in the five other major geographic regions.

An overwhelming majority of Hindus (94%) live in one country, India. The largest populations of Hindus outside India are in Nepal (2% of all Hindus) and Bangladesh (1%).

Southern Asia – a subregion defined by the U.N. Population Division as consisting of Afghanistan, Bangladesh, Bhutan, India, Iran, Maldives, Nepal, Pakistan and Sri Lanka – is home to about 99% of the world’s Hindu population. Overall, an estimated 60% of Southern Asia’s total population is Hindu.

Hindus form a majority in just three countries: Nepal (81%), India (80%) and Mauritius (56%). But 97% of all Hindus live in those countries, making Hindus the most likely of the religious groups in this study to live as a majority. 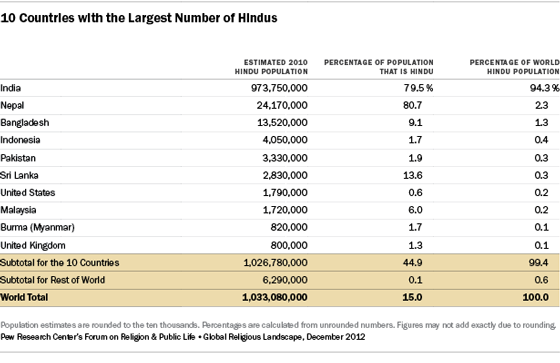 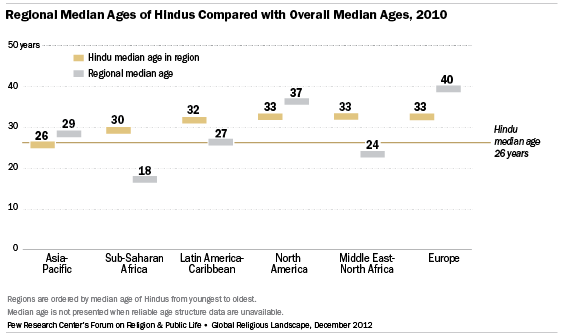 Next: Buddhists
← Prev Page
Page2Page3Page4Page5You are reading page6Page7Page8Page9Page10Page11Page12
Next Page →